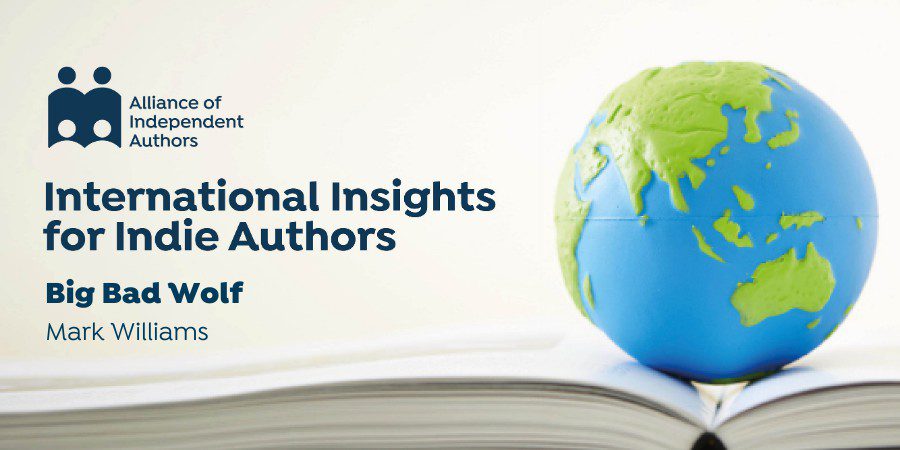 For the next edition of the Alliance of Independent Authors International Insights hosted by Mark Williams of The New Publishing Standard, we’re moving on to Big Bad Wolf. If you missed our introduction series to global book markets, you can read them here: Africa, India and China markets in Asia, the Middle East North Africa markets, the Ibero-America markets, the Asia-Pacific markets and the European markets, and also a special edition on the English-language markets. This is international insights: Big Bad Wolf.

We all love fairytales, but this is a fairytale with a difference. A fairytale where English-language books are sold not in tens, hundreds, thousands, or even hundreds of thousands, but by the million, in eleven-day 24/7 flash sales in countries where, usually, English is not the first language.

Big Bad Wolf is named after the fairytale character, as children’s books were the original mainstay of the operation, but nowadays any and all books are part of the deal. Big Bad Wolf operates out of Malaysia, where it has, over the course of ten years, developed the implausible business model of buying English-language books, in the millions, from publishers in the US and UK, and then shipping them in huge containers to ports in cities across South and SE Asia and the Middle East where they are stacked high in convention centres and sold in eleven-day flash sales that are open twenty-four hours a day, and that attract eager booklovers in the tens of thousands.

Big Bad Wolf started 2020 with a debut event in Phnom Penh, the capital of Cambodia in SE Asia, where it took 1 million English-language books and attracted 50,000 visitors in just the first four days. Big Bad Wolf’s second venue for 2020 was Yangon in Myanmar. (That’s Burma for you older folks out there.) One million books? You bet. Last year Big Bad Wolf did its debut event in Myanmar and it proved so popular that they had to go back later in the year and do a second run. All told, Big Bad Wolf Myanmar 2019 attracted 250,000 visitors who spent $1.8 million on English-language books.

This year Big Bad Wolf was part-way through its Indonesia event in Jakarta when the coronavirus pandemic struck and it seemed Big Bad Wolf’s plans to ship 1 billion (no typo!) English-language books to the emerging markets over the next five years was the rare fairytale without a happy ending.

But before we go on, let’s take a look at the rest of the Big Bad Wolf 2019 story to fully appreciate the opportunity about to unfold.

There was no Big Bad Wolf Cambodia in 2019, but even so Big Bad Wolf visited ten countries with its 24/7 11-day flash sales of English-language books — many of them on several occasions, such was the demand. And just so you know, I’ve double-checked the numbers that follow and none are typos!

In 2019 Big Bad Wolf went to Colombo, Sri Lanka, with 1.5 million English-language books up for grabs.

It went to Dubai in the United Arab Emirates where it stacked high 3 million English-language books.

In March Big Bad Wolf took 1 million English-language books to Pakistan for its debut event in that country. It was so popular that Big Bad Wolf had to go back again later in the year.

In the Philippines Big Bad Wolf kicked off with 2 million English-language books up for grabs in Manila, but made three more trips to the Philippines last year to try keep up with demand.

In Big Bad Wolf’s homeland of Malaysia the company ran no fewer than eleven events, the biggest of which, the end of year spectacular in Kuala Lumpur, alone fielded 4.5 million books.

Yet even that’s not the biggest. That crown goes to the Big Bad Wolf event in Indonesia, where for several years now 5.5 million books have been piled high in the flagship event in Jakarta, where 750,000 visitors is not unheard of. Last year Big Bad Wolf had to go back to Indonesia a further 6 times, shipping over ten million books to the country in total.

Okay, so now comes the bad news. There’s no way for indie authors to get in on the Big Bad Wolf sales as such, because they specialise in buying remaindered books from big publishers. Indies of course don’t have remaindered books, and in any case the costs involved in our POD books would leave us no room to sell at Big Bad Wolf prices even if there was some way to get our titles physically to a Big Bad Wolf event and integrate into their system.

Despite this I’ve for years now been advocating authors and publishers of all sizes pay attention to Big Bad Wolf, because what it is demonstrating is the huge demand for affordable English-language books in markets many of us will have never given a second thought to for our English-language titles.

While we indies can’t compete with print prices, we can with digital, and that’s what makes following the Big Bad Wolf so exciting. At which point a reminder here that Big Bad Wolf had committed to shipping 1 billion books to the emerging markets over the next five years. Of course the pandemic put paid to that idea. Or did it?

Because counter-intuitively the pandemic has actually dealt Big Bad Wolf the cards to sell even more books than that, by forcing the company to shift its focus from in-person events to online events. With spectacular results. So far Big Bad Wolf has only made two test-run events on the third party e-commerce website Tokopedia in Indonesia, and in August-September launched its first online event on its own website in Thailand.

In fact there were teething problems, as one might expect with a debut event of this nature, and in consequence the Big Bad Wolf Thailand online event has been extended until September 13, meaning if we are quick we can take a peak at the impressive range of titles Big Bad Wolf is fielding.

Learning from its problems, we can safely assume Big Bad Wolf Singapore, which kicks off September 17, will run smoothly and those 20 million books available will attract big online crowds.

And on October 1 Big Bad Wolf Sri Lanka will make its online debut. Expect more as we head into 2021.

For indie authors the excitement is not just about the huge demand for English-language books that these events — whether online or in-person — demonstrate, but the fact that, by definition, every person attending these online sales is using a device that can hold ebooks and audiobooks, and every paying customer is someone who has the means to pay online. What’s not to like?

Connecting with these readers is down to us, and here I’d refer you to a previous ALLi International Insights post on online book fairs and how indie authors can ride these events to find new audiences.

The Big Bad Wolf events are just some of myriad global publishing events we might want to focus on. Here’s a few more:

The bad news is none of these countries have Kindle stores, although there is an Amazon Singapore site and an Amazon UAE site and we may see our KDP Print and IngramSpark POD titles there if a third-party seller has them listed.

Apple Books is available in none of these countries, and of course nor is Nook. Google Play is available in Thailand, Philippines, Singapore, Malaysia, Indonesia, South Korea, Taiwan and the UAE but not in Cambodia, Myanmar, Pakistan or Sri Lanka.

e-Sentral is based in Malaysia but also supports Singapore and Indonesia (and also Brunei).

OverDrive is the supplier of digital library books in Singapore and in 2019 saw over 4 million downloads (ebook and audiobook) in Singapore. Storytel is also in Singapore.

Thailand — the main ebook player by far is Ookbee, which is also in the Philippines and Malaysia (and also Vietnam). Storytel has a Thailand launch planned for later this year.

The subscription services Bookmate and Scribd also have reach across some of these countries.`

Amazon is of course available direct via KDP, and also via BookBaby, Draft2Digital, Ebook Partnership, PublishDrive, StreetLib and XinXii.

Google Play is available via PublishDrive, XinXii and StreetLib.

e-Sentral — go direct or via Bookbaby, Ebook Partnership and PublishDrive.

Bookmate is available through Ebook Partnership and PublishDrive.

Ookbee — sadly none of our indie-friendly aggregators have managed to connect yet. Keep pestering them to try again!

N.B. This list is not exhaustive but is accurate to the best of my knowledge. So here’s a call out to you, the reader, or perhaps our friends at the various aggregators. Please do submit additional info or corrections in comments so we can update the list as we go forward.