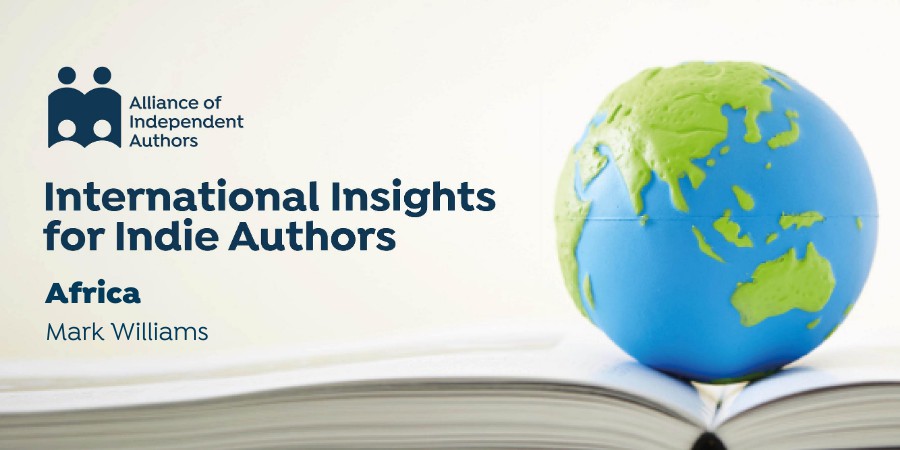 For the next edition of the Alliance of Independent Authors International Insights hosted by Mark Williams of The New Publishing Standard, we’re finishing the regional spotlights. For part 7 of our introduction to the global book markets we have Africa in our sights, rounding off a series of posts that have looked at the key India and China markets in Asia, the Middle East North Africa markets, the Ibero-America markets, the Asia-Pacific markets and the European markets, and also a special edition on the English-language markets. This is international insights for indie authors: Africa

Of course Africa was left until last because there’s not much to say. As we all know, Africans don’t read, there are no bookstores, the internet hasn’t got there yet, and this is going be the shortest post ever. And yes, all the above is true. Except when it’s not. Let me explain.

I’m writing this from The Gambia, West Africa, one of the poorest nations on the planet, so first-hand experience. When I moved here ten years ago I had to make daily trips to the tourist hotels to use an internet café with a dial-up-speed connection just to get online.

Bookstores? If we discount educational suppliers for schools and colleges then in this country I can count the bookstores worthy of the name on one…finger. Seriously. It’s not that people don’t read (there’s a thriving gray-market in used books the tourists leave behind) so much that there are so few books available. It’s hard to develop a reading habit when reading material is an endangered species.

Digital books? As an ex-pat with a pre-existing account I can easily download ebooks from the Kindle store. But if I sign out of my UK Amazon account the Kindle store is not only not accessible, but not even visible! Apple Books? Not a chance. Google Play Books? What’s that? Kobo? Only through the international US store where most titles are not available (territorial restrictions) and anyway you need a credit card to pay. Most people here are unbanked.

Ten years on and little has changed except now I have 4G internet (on a good day if the wind is in the right direction and the gods are happy), I can watch Amazon Video, Netflix and other video streaming services, I can use social media, etc, but there’s still no Kindle, Apple Books or Google Play Books for local people. And I’m one of just 442,000 people in the entire country that are online. Internet penetration here is at just 18.3%.

So yeah, Africa is a lost cause. Next!

But hold on. Africa’s a big place. And I mean big. The entire USA would fit comfortably inside the Sahara Desert! In fact the USA, China, India, Japan, UK, West Europe and East Europe (exc. Russia) would all fit inside Africa’s borders. Oh, and Africa has a population of 1.3 billion people, all of whom could be reading our ebooks if only the internet would arrive. But right now Africa’s internet penetration across the continent is at just 38.3%.

Okay, so when will Africa be worth us indies bothering with? When will the internet in Africa catch up with the rest of the world? How about…now. Right now. Because that 38.3% penetration equates already, in August 2020, to Africa having over a half billion people online. 526 million as this year began. And yes that does mean there are more people online in Africa than in the United States. 252 million more!

You see, Africa is a continent of contradictions. Everything I said about The Gambia is true, and yes, the Kindle store is invisible across most of the continent. There are no Apple Books anywhere. Google Play Books has just two localised ebook stores (Egypt and South Africa) across a continent of over 50 countries.

Bookstores? Travel to South Africa and you’ll find bookstores on par in quality, if not size, with the best in Europe or the USA. Many African countries have wonderful bookstores, make no mistake. But in others bookstores are few and far between.

It’s the same with book fairs. Some African countries barely have book fairs worthy of the name. Others have… well, let’s just say that not only are some of the biggest book fairs in the world in Africa, but one of those is THE biggest.

So much for Africans not reading. But do they read digital books? Where are all these half billion internet users if they are not in The Gambia? Well. Angola, Cameroon, D.R. Congo, Libya, Mozambique, Rwanda, Senegal, Tunisia, Zambia and Zimbabwe all have more people online than New Zealand or Ireland, both vibrant digital book markets.

Cote D’Ivoire, Ethiopia, Ghana, Mali, Sudan and Uganda all have more internet users than Sweden, the home of Storytel and Bookbeat and of course a leading digital books market. Algeria, Morocco and Tanzania all have more internet users than Australia. South Africa has as many people online as Canada. Kenya with 46.8 million people online and Egypt with 49 million are both bigger in internet terms than Spain, which has just 42.9 million people online.

And then there’s Nigeria, which with 126 million internet users has almost three times as many people online as Spain, literally twice as many as the UK, and is way ahead of Germany, Japan and Russia, coming in as the sixth largest country on the planet by internet users. So yes, the internet has reached Africa.

Digital books? Not so much. As already noted, the big western ebook and audiobook players we indies take for granted have yet to wake up to the Africa opportunity, and sadly our regular coterie of aggregators are behind the curve too. But expect that to change as this decade unfolds. A market of half a billion internet users is not to be lightly ignored.

There are a handful of digital opportunities available right now to us. By way of example, Exclusives (supplied by Kobo), Takealot and AudioShelf in South Africa, OkadaBooks in Nigeria and AkooBooks Audio in Ghana. There are any number of small digital players cropping up across the continent, and Storytel has committed to a Middle East North Africa hub which will embrace several of the North African markets as it builds.

There are some familiar names too. Penguin Random House South Africa has its own ebook store. Not much use to indies, of course, but a reminder that while many indies have been looking the other way, traditional publishers are getting ahead of us. OverDrive supplies the Kigali National Library in Rwanda, and Odilo has just this week launched a library app in Zimbabwe.

And then there’s YouScribe, the Paris-based aggregator and retailer that has shaken the global publishing community by not just launching a digital subscription service in francophone Africa but by picking up a half million subscribers. So yes, the internet is here, digital books are here, and rest assured I’ll come back on all this in future posts, with indie-relevant detail. But for now just to say that, as digital-first indies we should see Africa as an exciting if challenging opportunity, and look to explore every chance to get a foothold now in one of the least-competitive and fastest growing book markets on the planet.

And here’s a suggestion to be going on with:

At the end of October the Algiers International Book Fair will be held online as the pandemic ravages that country. That will be the same Algiers book fair mentioned above that usually attract crowds of over 2 million. And in September the Nigeria International Book Fair also heads online. Yes, the same Nigeria that has literally twice as many people online as the UK.

Online fairs and festivals are an easy way for indies anywhere in the world to watch, join in and connect with the reading public in these countries, from the comfort of our own desk. For all the destruction, suffering and misery the Covid-19 pandemic has wrought, one silver lining to this dark global cloud has been to force global publishing online in a way that was quite unimaginable as this year began.

Book fairs and festivals in far-flung lands that most of us would never give a second thought to as in-person events because of the costs and impracticalities of being there are suddenly golden opportunities to show just how internationalist we really are. Algeria and Nigeria right here in Africa are great places to start, but as I’ll show in future posts, these are just the tip of the iceberg of global opportunity drifting past us right now.