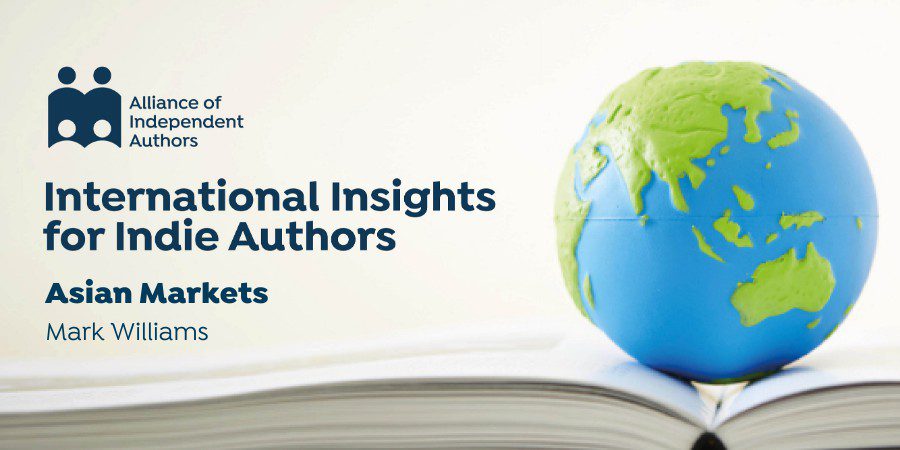 The #AskALLi team is excited to announce a new blog series starting here, today. As you know, the Alliance of Independent Authors is a global organization and digital publishing of ebooks, audiobooks and POD means indie authors can sell books the world over.  We invited Mark Williams of The New Publishing Standard, who has done more than anyone else to highlight international opportunities and strategies for self-publishing authors.

At ALLi, we are long-term admirers of Mark's international publishing perspective, and of StreetLib, the ebook aggregator with an international focus, that supports his work. So we're thrilled to welcome Mark to the ALLi editorial team.

His weekly column kicks off with a look at the–often overlooked–Asian markets and he will be posting weekly, going forward, on the latest international opportunities for indie authors–with a particular focus on international marketing.

This is the International Insights for Indie Authors series and today's post is a sneak peek at two Asian markets.

Welcome to this first edition of International Insights, where we’ll be taking a weekly look at the exciting global publishing scene that is mostly happening off the radar of indie authors, who have been understandably focussed on the world’s biggest ebook market: the USA.

And let’s start with that market. While the USA is still probably, in cold dollar terms, the world’s biggest ebook market, it’s not the biggest by volume. That honor goes to China, which may surprise many, but shouldn’t come as such a surprise.  China has 854 million internet users, compared to 312 million people online in the USA. And whereas the USA has nowhere to grow, China is only at 59% internet penetration and will easily top 1 billion internet users later this decade.

China is not an easy market to access, and you can’t go to the Kindle China store via KDP, but there are ways and means. And this is not something new: my ebooks topped the Kindle CN charts way back in 2014.

China is also an exciting market for print and for audiobooks. In fact, China is a massive audiobook market, with 560 million listeners and a valuation on par with the US audiobook market. And right now they are making inroads into AI narration.

India is next in the internet stakes, with 560 million people online, and India is only at 40% internet penetration.

India is incredibly exciting for authors, but challenging. While Kindle IN is easy to access through KDP (unlike Kindle CN which is not part of KDP) there are challenges. Print books are by western standards incredibly cheap, and KDP does not let indies set ebook prices as low as mainstream publishers.

But India’s ebook market is growing fast and well worth persevering. Amazon is not the only show in town. Check out Google Play Books , Kobo, and local players like Juggernaut and Airtel Bharti.

Unlike in our western bookish world, book fairs in countries like India are where most books are sold. In January this year the Chennai Book Fair attracted 1.3 million visitors who spent $2.8 million on books.

That event ran pretty much at the same time as the New Delhi World Book Fair which attracted over 1 million visitors, the Kerala Literary Festival (400,000 visitors) and the Jaipur Lit Fest 400,000). And let’s not mention the Kolkata Int. Book Fair which typically pulls a crowd of over 2 million that typically send $3 million on books.

Then the pandemic hit and India’s and the world’s book fair calendars were ripped up. With the result, in India and globally, that more and more readers have been driven online. A silver lining for indie authors to this dark cloud that is the Covid-19 pandemic.

International Insights for Indie Authors: Go to the Readers

When it comes to selling books in the global markets like India, I constantly see indie authors complaining they aren’t seeing results. A US author has books available worldwide through StreetLib or another aggregator, and promotes their books on Facebook and Twitter, but get most sales in America.

“This going global thing is a waste of time,” they decide.

Yet a recent report in India tells us that 79% of merchants are using social media to pull in sales there. The most used social networks for online commerce are Facebook (89%), WhatsApp (43%) and Instagram(41%), says the report, which is focussed on a number of retails sectors.

Directing all your promotion at the USA, or UK, or Australia, or wherever you live is not going to help readers in India discover your books. Yes, it’s nice that there are 312 million people online in the USA but that market is at 95.6% penetration. It isn’t going to get much bigger. In the UK it's just over 90%, in Canada just under. But in India internet penetration is still at a paltry 40%.

Given the population size of India, that still represents 150 million *more* people than the USA. It is growing at a phenomenal rate and India has a huge middle-class hungry for books from abroad.

The USA has 240 million Facebook users, India has 251 million. (And don’t forget that’s just 40% penetration; the potential for growth is huge). But if you want to connect with readers in India on Facebook you’ll need to engage with Indian readers on Facebook. By default our Facebook, Twitter and other social media accounts, and our search engines, give priority to notifications from our own country.

Here's how to make a start on Facebook, as an example:

It’s not hard to build a following in another country. Step outside your home box, truly engage with other territories, and the opportunities open up.

Global markets won’t come to you. You need to go to them.

I'll be looking at how to do this, and other aspects of marketing books abroad, in more detail in coming blog posts. It all begins, though, with a going global attitude.