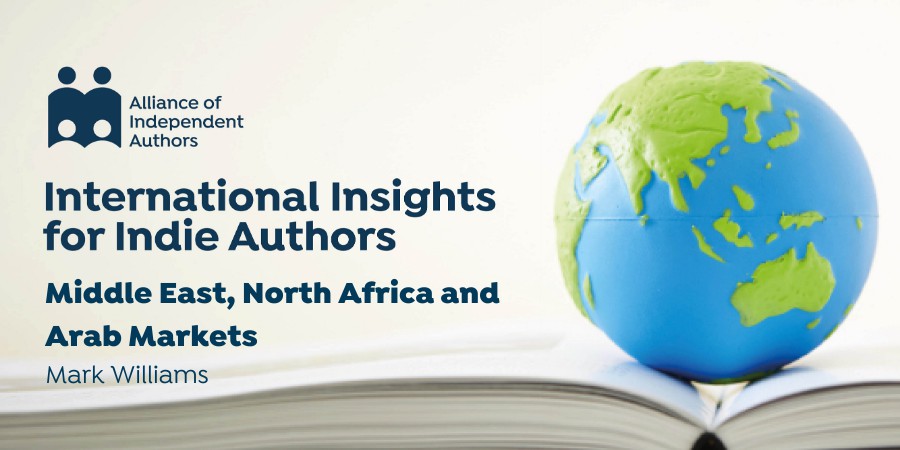 Welcome back to the Alliance of Independent Authors next instalment in the International Insights series hosted by Mark Williams of The New Publishing Standard. This week, Mark discusses Middle East, North Africa and Arab Markets.

By 2023 Storytel plans to be in 40 markets, and several will be Arab markets across the Middle East and North Africa (MENA).

Storytel this month acquired the Arabic audiobook service Kitab Sawti and now has the Arab world’s largest digital books catalogue. It competes with MENA audiobook and ebook players like Booklava, Dhad, Al Manhal and others.

MENA isn’t an easy region to access for indies, and digital is still in its infancy here, but that’s both a hindrance and an opportunity. But why bother? After all, we all know “Arabs don’t read”. Okay, let’s lay that nonsensical myth to rest once and for all.

The world’s largest book fair by visitor numbers is not Frankfurt, London, or New York, but Cairo, Egypt. This year began with the Cairo International Book Fair attracting 3.5 million visitors. No typo.

Saudi Arabia’s smaller Jeddah International Book Fair pulled in 441,000 visitors last year. And another 440,000 visitors turned out for the Erbil book fair in Iraqi Kurdistan. While in Morocco the Casablanca fair pulled in a half million booklovers.

But let me wind down this brief look at the Arab markets in the United Arab Emirates, where the Sharjah International Book Fair attracted 2.5 million visitors last year, as part of its World Book Capital celebrations. Sharjah is also home to the world’s first ever publishing city (seriously!) and the Sharjah Children’s Reading Festival (typically a half million visitors).

Sharjah is a legend in the making. An Arab prince is bequeathed a golden dagger—a priceless family heirloom to be handed down from generation to generation. And at twelve years old the boy mortgages the golden dagger to buy books. The boy, now a grown man, is better known as His Highness Sheikh Dr. Sultan Bin Muhammad Al Qasimi, the current ruler of the emirate of Sharjah.

And then there’s Abu Dhabi, another Emirate, where the Sheikh Zayed Book Award is one of the riches literary prizes in the world ($200,000), and the Abu Dhabi International Book Fair is one of the world’s leading trade events and leads the charge for digitisation in the Arab book markets.

Arabic, French and English are they key languages, so let me end this post with Big Bad Wolf which has been holding its famous 11-day 24/7 flash sales in the UAE this past couple of years, each time attracting huge crowds by shipping English language print books to Dubai. 3 million English-language books each time.