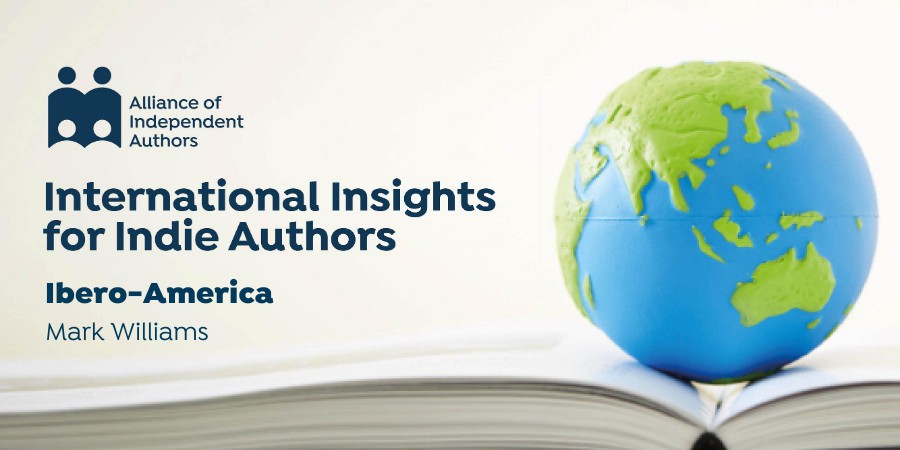 Welcome back to the Alliance of Independent Authors next instalment in the International Insights series hosted by Mark Williams of The New Publishing Standard. This week, Mark discusses Ibero-America.

For our third edition of ALLi International Insights we turn our attention to Ibero-America, which for those who flunked geography at school encompasses Spain and Portugal (Iberia) and the Spanish and Portuguese-speaking markets in the Americas.

Notice I didn’t say “Latin America”, which is most of the Americas from Mexico south, and that’s because, believe it or not, the highest concentration of Spanish-speakers in the world after Mexico is the USA. Yes, the US has more Spanish-speakers than Spain!

In fact, Spain comes in at fourth place, as Colombia also has more Spanish-speakers than Spain. But before we plunge in further, let me address the question many indies with Spanish-language titles will already be asking—so why aren’t we seeing sales in the US?

Lots of possible answers to that, of course, not least the quality of the translation, but leaving aside that the Amazon US store only went bi-lingual in 2017, we first and foremost need to take a look at our marketing. Here’s the thing: If we drive all our Amazon sales via Bookbub and other English-language promotion services, and all our D2C marketing, tweets, Instagrams and Facebook posts and our email shots are in English… Need I say more?

Not, of course, that Amazon is the only show in town for Spanish-language ebook sales in the USA. Apple, Nook, Kobo and Google Play are of course easy options, but so are library services like OverDrive and Odilo, and subscription services like Scribd. They all offer audiobooks as well as ebooks, and we’ll wind up the USA element of this essay on that point, because while Audible is of course by far the biggest audiobook player in the US, there’s no Audible Spain or Audible Mexico or Audible Brazil. That may happen soon—Amazon is known to be getting publishers on board in Brazil and Spain and has an Audible Latino option for the US, there are no dedicated Audible stores for any of the Spanish or Portuguese-speaking nations.

The US Kindle store is notionally accessible across Ibero-America, but outside the official Kindle stores (Mexico, Brazil and Spain) a $2 surcharge is usually levied on international sales via the US store, meaning booklovers outside these countries are likely to gravitate to other players.

But here’s where it gets interesting.

Apple Books is available not just in US, Spain, Brazil and Mexico but also in Portugal, Argentina, Colombia, Paraguay, Peru, Ecuador, Bolivia, Venezuela, Chile, Panama, Honduras, Guatemala, Nicaragua, Costa Rica and Dominican Republic. For reasons unknown Apple Books only sells public domain titles in Uruguay. Google Play Books matches all those and covers Uruguay too! Kobo is a mixed bag. Dedicated operations in US, Spain, Portugal, Brazil and Mexico and for everywhere else in the world (except Cuba, Syria, Iran, North Korea and Crimea region) the US store will allow purchases without surcharges, but at US prices, so no room for indies to play.

Which is why we might want to take a look at the local players.

BajaLibros, for example, is the region’s oldest ebook store (now audio as well, of course) and operates in the US, Mexico, Argentina, Peru, Chile, Colombia,Paraguay, Uruguay, Guatemala, Panama and Spain. There are localised stores like Mexico’s improbably-named Gandhi. Or the Peru Bookstore, which is considerately in Peru. Or Casa del Libro in Spain. We may find the Spain-based library service Odilo worth a look. Its 3 million titles across 43 countries have attracted 140 million users. Odilo isn’t just “there”. It specialises in dedicated local services. Take a look, for example, at this BPDigital (Digital Public Library) app which Odilo operates for the National Service of Cultural Heritage in Chile.

And then there are subscription services like Argentina-based Bidi and Leamos, and Spain-based 24Symbols, and Bookmate and Scribd. Scribd launched a dedicated Mexico store in 2019 and if you’re wondering why readers would go to Scribd rather than Amazon’s Kindle Unlimited, consider that Scribd MX attracted big publishers like Planeta, Penguin Random House Grupo Editorial, Anagrama, Sexto Piso and El Colegio de México. That in itself is valuable reminder that while “Big Pub” eschews subscription in the Anglophone markets, in other parts of the world it’s a different story.

Bookmate is another global subscription service with a keen interest in the region, and has just reported a 50% increase in Latin America engagement thanks to Covid-19. Another global player with a keen interest Ibero-American content is Storytel, now in Spain, Brazil, Mexico and Colombia, with plans to expand further. Storytel is audiobook-focussed but also offers ebooks, as does Ubook.

If you’ve never heard of Ubook, take that as a lesson in not building our global strategies based on what happens where we are. Ubook is by far the largest audiobook operator (also supplies ebooks) in Brazil and across the Spanish-speaking Americas—try Brazil, Argentina, Colombia. Chile, Argentina, Peru, Paraguay, Uruguay, Panama, Guatemala, Honduras, El Salvador, Spain and Portugal (as well as snaking its tentacles out globally to Germany, UK, Canada, Ghana, Papua New Guinea and Jamaica!).

Print on Demand (POD)? Well, Ingram and KDP print will handle Spanish and Portuguese-language titles, but shipped from the US or EU. To get meaningful POD try Podiprint, which currently offers POD distribution across Spain, Portugal, Mexico, Argentina, Colombia, Peru, Ecuador and Uruguay.

Reading the trade journals you could be forgiven for thinking few people in this part of the world actual read, but as we explored in previous ALLi International Insights, B&M store sales numbers are often just part of the picture.

Brazil's São Paulo Biennial has been cancelled this year thanks to the pandemic, but the last event was considered a disappointment when “only” 633,000 people turned out over ten days. And yes, that is 63,300 people a day attending a book fair in Brazil.

US and UK book fairs don’t come anywhere near. It’s a similar story across Ibero-America. The biggest cultural event in Chile is a book fair. Oh, and in Peru, Paraguay, Brazil, Argentina, Colombia, Panama, Bolivia, Guatemala… Peru’s La Paz International Book Fair saw 590,000 visitors spend $6 million last year. 605,000 attended Colombia’s Bogota International Book Fair last year. Argentina? Try 1.2 million. That’s 1.2 million visitors every year, and the only reason there’s not more is that the venue cannot fit any more visitors in. No time here to mention the Mexico Children’s Book Fair that attracted over a half million visitors, or the better know Guadalajara Book Fair in Mexico, which pulls in over 800,000 visitors. Even tiny Panama attracts 100,000 visitors a time to its international book fair. This year the Panama event will be online, and the same for many others.

And then there’s Spain and Portugal.

Portugal of course is on almost no-one’s list as a priority book market, but we might want to think again. The Lisbon Book Fair is one of the largest book events in Europe. In 2018, for example, over a half million booklovers spent $5.6 million at the annual event. Spain? You might want to be sitting down for this. The Madrid Book Fair is not just the largest book event in Europe but one of the largest in the world. In 2019, it attracted 2.3 million visitors that spent $11.4 million and took away 550,000 books. And yes, that’s $670,588 per day being spent at a book fair in Spain.

Let me end, though with tiny Cuba, the politically isolated Caribbean island that is a haven for booklovers. The Havana International Book Fair starts in the capital but then spreads across the country and lasts full month. 1 million visitors is not uncommon, but in 2018 the event set a new record with 2.1 million visitors who bought 1.3 million books.