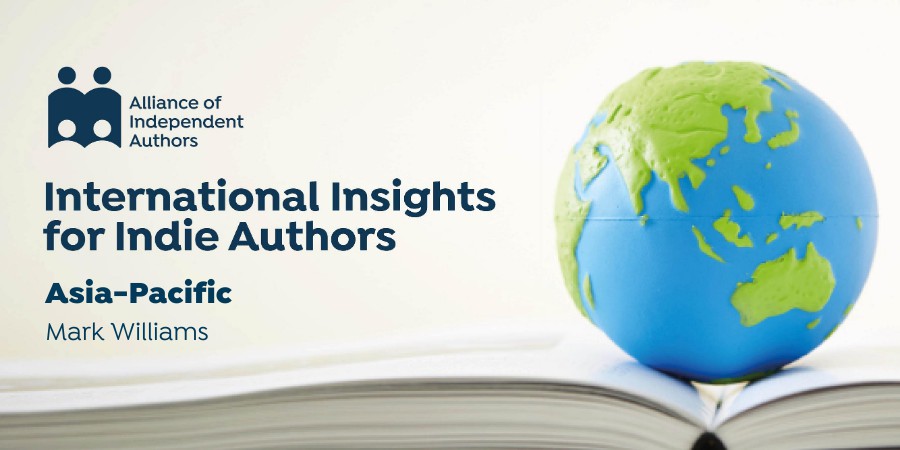 For the next edition of the Alliance of Independent Authors International Insights hosted by Mark Williams of The New Publishing Standard, we're back for another regional spotlight. To read the rest, you can visit: Asia here, Middle East Arab markets here, Ibero-America here. Today, Mark is focusing on the global Asia-Pacific market.

Most indies are understandably focussed on the mature western markets. They are easy to access, have large online populations, and speak English or European languages that are easy to get translated into.

But the world is big place. There are 7.8 billion people out there, and this is 2020, not 2000. Back in 2000 there were just 360 million internet users around the world. By 2005, two years before the Kindle store launched, there was excited talk that, with 938 million people online, we might hit the magical one billion mark.

The year the Kindle store launched in the there were 1.3 billion people online worldwide. By 2010 that had reached 2 billion.

Fast forward to 2020 and there are 4.8 billion internet users around the word, and here’s the thing: most of them are not in those mature western markets we indies focus on. In fact – you might want to be sitting down for this – as of June 2020 the USA has just 6.5% of the world’s internet users.

So the rest are in Europe, right? Not so fast. Europe may have more than twice as many people online as the US, but it still only accounts for 15% of the world’s internet users, and even Latin America adds only another 10%. By contrast, over 50% of the world’s online population is in Asia-Pacific (APAC). That’s 2.3 billion internet users that could potentially have access to our digital books. We’ve touched on Asia previously, when we briefly covered India and China in the first ALLi International Insights post, and India came up again in the post on English-language markets.

For this essay we’re going to set aside China, with its 854 million internet users, and India, with its 560 million internet users, and also the 69 million people online in Turkey (more than the UK) and the 112 million online in Russia, as these are covered in the Europe count. But that still leaves us with an APAC online population of 886 million – more than Europe, more than Latin America, and over half a billion more than the USA. The bad news is that is spread across more than sixty countries, ranging from giants like Indonesia to tiny islands in the Pacific, and more languages than you’d care to count.

More bad news is that, with the exception of India, Japan, Australia and New Zealand (NZ via the AU store), there is no Kindle presence in APAC. Apple? APAC is huge Apple territory – Apple devices are everywhere. But Apple Books not so much. In fact Apple Books is only an option in Japan. Google Play Books? There’s some promise here. Google Play Books supports not only Japan and India but also Hong Kong, Indonesia, Kazakhstan, Kyrgyzstan, Singapore, South Korea, Taiwan, Thailand, Uzbekistan and Vietnam.

It will surprise few to learn that Japan has almost twice the number of internet users as the UK. 118 million, since you ask. And South Korea is of course a well-known digital nation, so its 49 million internet users will raise few eyebrows.

Some of these countries are small. Kyrgyzstan has just 2.5 million online, while Singapore has 5.1 million. But here a reminder per the last edition of ALLi International Insights that OverDrive saw 4.2 million digital downloads in Singapore in 2019.

Kobo? Kobo is available pretty much everywhere, although localized APAC stores are limited to Australia, Hong Kong, Japan, Malaysia, New Zealand, Philippines, Singapore, Taiwan and Thailand. Kobo’s international store is one way indies can connect with booklovers in the far-too-many-to-mention other APAC countries that Amazon, Apple and Google Play don’t want to know.

Take Afghanistan and Sri Lanka, for example. Both have 7 million people online that could be connecting with our books. Cambodia and Azerbaijan each have 8 million online. The Himalayan kingdom of Nepal has 16 million internet users. Myanmar has 22 million.

There are 67 million online in Iran. That’s more than the UK. Pakistan also has more internet users than the UK. 71 million, while Bangladesh leaves Germany in the dust with 96 million internet users. Access isn’t easy to most of these countries, but subscription services and retail options are increasingly available, and long-term strategists will be thinking about the potential, not just what we can achieve today.

In the last International Insights we mentioned how Big Bad Wolf was taking literally millions of English-language books to APAC countries like Thailand, Cambodia, Myanmar, Sri Lanka, Malaysia, Philippines, Taiwan, Pakistan, South Korea and Indonesia, to be sold in 11-day 24/7 flash-sales that attract hundreds of thousands of visitors. Many of these countries have annual international book fairs that attract crowds of booklovers the US and UK book fairs can only dream of.

Iran’s Tehran International Book Fair for example regularly attracts 2 million people, and Iran is also home to one of the biggest bookstores in the world. Iran’s primary ebook store is Fidibo, which has its own ereader for Persian ebooks, and it supplies ebooks for commuters on the Tehran Metro.

Other APAC book fairs can attract anywhere from hundreds of thousands to two million visitors. Sri Lanka’s Colombo International Book Fair, for example, pulls in 1.5 million booklovers. The Bangladesh Ekushey Boi Mela lasts the entire of February and typically sells around US $10 million in books each time. There’s no time here to touch on the many smaller APAC nations and the Pacific islands of Oceania which offer yet more audience reach for indie authors.

In almost all these countries print access is challenging, although IngramSpark has strengthened its operation in Australia (also serving New Zealand), but lucrative deals are to be found if we care to look seriously at the twin options of directly approaching foreign publishers and of connecting with foreign rights agents who have specialist local knowledge and contacts in these markets. Being indie doesn’t mean having to do it all ourselves.

For those of us who prefer to let aggregators do the heavy-lifting, it will be worth looking carefully at all the digital distributors out there and getting the best of each, not relying on any single player because it’s convenient or we haven’t the time. Serious internationalist indie authors take inconvenience in our stride and make time.

But as these ALLi International Insights posts will show as the picture builds up, no matter how internationalist we try to be, there’s a big, wide world opportunity out there that we’ve barely begun to tap into. Next time someone tells us the global book market doesn’t stand a chance against music and movies and we’re fighting a lost cause, tell them this: