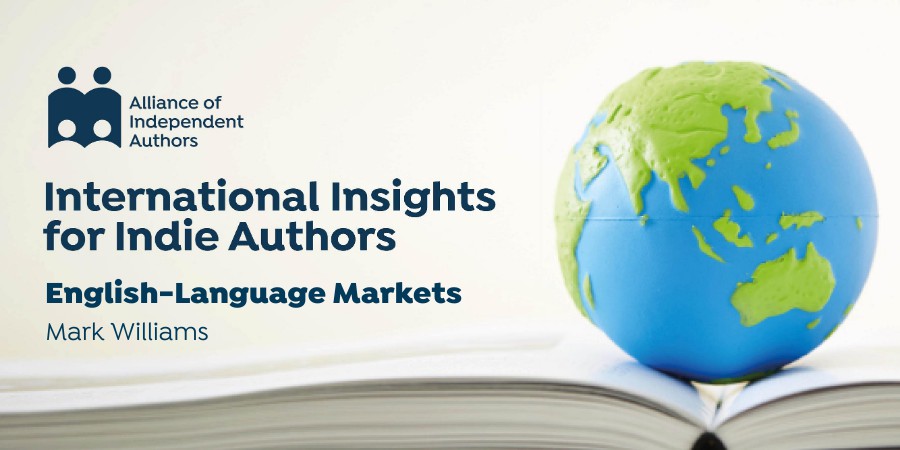 For the fourth edition of the Alliance of Independent Authors International Insights hosted by Mark Williams of The New Publishing Standard, we take a break from our regional spotlights (Asia here, Middle East Arab markets here, Ibero-America here, though Mark will be back with more next week!) to focus on the global English-language markets.

Of course we all know the usual suspects. The USA, the UK, Canada, Australia, and New Zealand. And no doubt we all have them covered. Or do we?

Amazon, Apple, Google Play and Kobo are all there, and of course Nook is an additional option in the US.

Amazon dominates the US and UK, of course, but if we’re not seeing much action from other US and UK players we might want to take a look at our marketing balance. If we push all our energies into promoting Amazon because other platforms aren’t worth the effort there’s a danger it becomes a self-fulfilling prophecy.

And it’s easy to fall for the nuanced negativity surrounding stores like Barnes & Noble and Nook and miss a trick. Many indie pundits had declared B&N and Nook dead in the water, predictions of imminent bankruptcy everywhere, and as for Nook… Put it out of its misery.

The new B&N CEO James Daunt fell into just that trap when he took over the company, confident he could turn around the struggling bricks & mortar stores but dismissive of Nook and ebooks in general, only to admit in June that “we sell an awful lot of ebooks in the US”. Daunt has now committed to investing in Nook.

If any of us have been persuaded by the barrage of negative press not to make any effort with Nook and B&N, let alone the smaller operators like Books-A-Million, maybe now is the time to rethink.

And of course there are many more bookstores in the US, and many that also sell ebooks and audiobooks. Amazon is not the only show in town, and with a little effort it’s not hard to get our POD titles into online stores of pretty much every book retailer, and if we use IngramSpark maybe into actual bricks and mortar stores.

And then there’s libraries, where again print access can be challenging, but for digital books libraries are easy to access and can be very lucrative. Hoopla, Odilo and OverDrive immediately spring to mind. There are plenty of others. OverDrive is very much the powerhouse of digital libraries, supplying globally to places as unlikely as Sweden, the UAE, Singapore and Rwanda (the latter two both English-language markets) among many.

But let me stay with the USA and Canada here and note that in 2019 alone OverDrive saw digital downloads totalling 326 million, of which 211 million were ebooks and 114 million audiobooks. 6.6 million of them came from Canada’s Toronto Public Library, pushing the Los Angeles Public Library into second place with “only” 5.9 million downloads. While tiny English-speaking Singapore, population 5.8 million, saw 4.2 million OverDrive downloads last year.

In Canada it is Indigo that is the biggest player in town, and the Indigo digital store has Rakuten Kobo behind it. That’s as well as the Kobo Canada store, which recently added the subscription service Kobo Plus.

Kobo is also a significant player in the UK, New Zealand and Australia. If we’re not seeing much action, it may be because we aren’t promoting our presence that well.

Here’s the thing: as well as the regional UK, AU and NZ Kobo stores, Kobo is also, quite separate from the localized stores, the digital supplier for UK’s WH Smith, the second largest bookstore chain in the country. And for Angus & Robertson and Collins, two major bookstore chains in Australia. And since this year Kobo also sups Australia’s biggest online store, Booktopia.

Be honest, when the last time we let anyone know we had ebooks in these stores?

Apple and Google Play are of course also in the UK, Canada, and Australia and New Zealand, while Amazon is in the UK and Canada and serves New Zealand via the Australia store.

Additionally, Amazon serves Ireland through the US and UK store, even though it uses a different currency, and Amazon serves India, another key English-language market.

But that’s where it pretty much grinds to a halt for Amazon. South Africans can buy through the US store (at US prices), but the US store feeds only a handful of other countries.

Apple has a dedicated Ireland store, but no India store.

Apple Books is in none of these countries (except for public domain titles).

As noted above, Singapore (which has an Amazon store that sells books, but no Kindle store) has population of 5.8 million but saw 4.2 million downloads through OverDrive last year.

Malaysia has an online population of 26 million that could easily be buying our digital books. The Philippines is larger, with 79 million people online—more than the entire population of the UK—and as many internet users as Germany.

You might think we’re running out of English-language countries by now, but we’re barely getting started. For visa purposes the UK government recognises the following countries as majority English-speaking:

Countries with English as an official language include:

On top of that we can add countries where for historical reasons English is widely spoken in business and admin. That list will include places like Egypt, Pakistan, Myanmar and Bangladesh among many.

English is also of course the second-language of countless other countries—try finding someone in Sweden, Denmark or the Netherlands that doesn’t speak English! Check out the English Proficiency Index for more surprises.

But let me start to wind down this post by returning to the Philippines, Malaysia and Myanmar and introducing, for those unfamiliar, the Big Bad Wolf.

Big Bad Wolf is a publishing phenomenon quite unlike any other. It ships English-language books by the million—literally—and sells them stacked high and cheap in 11-day 24/7 flash sales in countries like the aforementioned Malaysia, Myanmar and the Philippines.

Jakarta? That will be Indonesia, where in 2019 Big Bad Wolf made some five trips, the biggest taking 5.5 million books, 4.5 million of which were English, shipped in containers and sold in, you guessed it, 24/7 flash sales over 11 days. Typically 750,000 would turn out for the event.

Big Bad Wolf’s second largest event of 2019 was in Malaysia, where 4.5 million books were laid out. But there’s more.

In 2020, Big Bad Wolf had plans to double that, and had declared its intent to ship ONE BILLION English-language books to the emerging markets over the next five years. The pandemic had other ideas.

But for indies, there’s a silver lining to this cloud.

You see, Big Bad Wolf specialises in remaindered books. It means publishers can get the cost-efficiency of large print runs knowing the excess has a buyer and won’t be shredded. Big Bad Wolf mops up the excess and sells it in non-competing markets, as above, at prices few can resist.

But indies can’t compete here. POD is expensive at the best of times, and so it meant we can only look on, learning about the huge demand for English-language books in countries we’ve likely never given a second thought to as markets.

But this year, Big Bad Wolf is going online. It’s already had a trial event in Indonesia and another is lined up August, and in October the first-ever full-scale online Big Bad Wolf sale will happen across Sri Lanka.

That’s a chance for indies to join in the online festivities, connect with Sri Lankan readers, and build new audiences, because our indie ebooks can be just as affordable as Big Bad Wolf’s print titles.