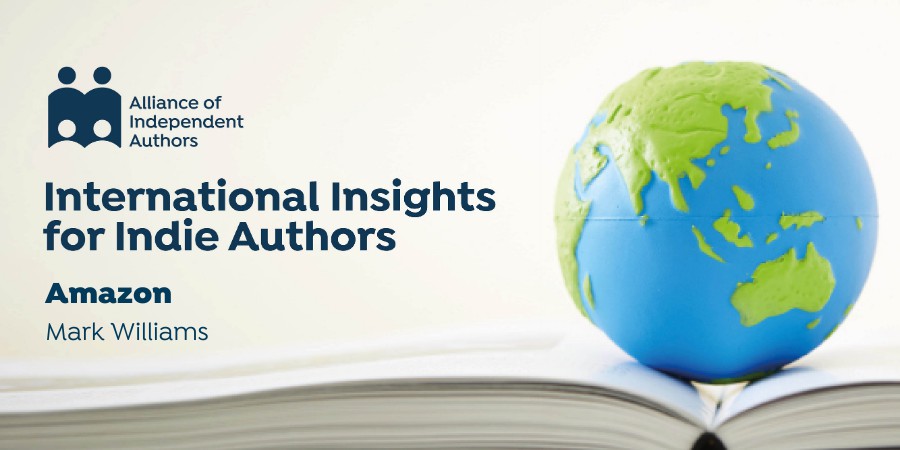 For the next edition of the Alliance of Independent Authors International Insights hosted by Mark Williams of The New Publishing Standard, we’re moving on to the giant that is Amazon. If you missed our introduction series to global book markets, you can read them here: Africa, India and China markets in Asia, the Middle East North Africa markets, the Ibero-America markets, the Asia-Pacific markets and the European markets, and also a special edition on the English-language markets. This is international insights: Amazon.

When the last decade began it was a time of tumultuous change as the “ebook revolution” got underway. In the USA, the arrival of the Kindle three years earlier had been a seismic shift in the western publishing landscape that overnight democratised the industry, creating a new force in publishing: the indie author.

There was no overnight revolution and there were no overnight indie successes. The pioneer indies made headlines, sure, but over the course of 2-3 years, and these were outliers, not the norm. Most of the early indie successes stories, apart from Amanda Hocking and co., came replete with a rights-reverted backlist of content and an existing fanbase. Global didn’t come into it. The first international Kindle store, in the UK, took three years to materialise. Then came a rapid expansion phase when we saw Kindle Germany, France, Italy, Spain launch in 2011, and Kindle Japan, China, Canada, Brazil, India in 2012. Then the pace changed. 2013 saw just two new stores, Mexico and Australia, and 2014 just one, the Netherlands. Then the Kindle store roll-out ground to a halt, although Amazon’s international expansion continued, with launches in the UAE, Saudi Arabia, Turkey and Singapore. Amazon also has a market-place presence in Vietnam, is about to launch in Sweden, and an Amazon Indonesia launch is on the cards.

That’s 18 active Amazon stores, but only 14 Kindle stores and as China isn’t an option in KDP it means only 13 Kindle stores for indies. If we are generous we can add Ireland via the UK store, Belgium via the US store, Switzerland and Austria via the DE store, and New Zealand via the Australia store. But consider what that means at the consumer end. Belgian readers have to go to Amazon France, which is at least the same currency. For Irish, Swiss, Austrian and New Zealand readers they not only have to go to a neighbouring country’s store but will see prices in a foreign currency.

Outside the Kindle countries some consumers may be able to buy from the US store at US prices, territorial rights permitting, and usually with a $2 surcharge, but for much of the world the Kindle store simply isn’t visible. I can only even see the Kindle store here in West Africa because I have a UK account.

For Audible, Amazon is in nine countries – Australia, Canada, France, Germany, India, Italy, Japan, UK and USA. Add Austria, Belgium, Ireland and Switzerland as countries available via Audible FR, DE or UK. But if we want to use ACX to create and/or distribute our audiobooks then quite apart from ACX only distributing to Amazon and Apple, ACX itself is only available to tax-paying and bank account-holding residents in the US, UK, Canada and Ireland.

ACX assures us “We hope to open up to a wider global audience in the future.” But don’t get too excited there. With ebooks, Amazon tells us its plan for world domination includes having “every book, ever published, in any language available for Kindle customers to purchase and begin reading in less than 60 seconds.” Juxtapose that with the reality that the last Kindle store launched in 2014, and that in 2020 KDP still only supports 44 languages (out of 6,500). And that 44 languages becomes less exciting commercially when we consider many are micro-European languages like Basque, Bokmål Norwegian, Cornish, Corsican, Eastern Frisian, Frisian, Irish, Luxembourgish, Manx, Northern Frisian, Nynorsk Norwegian, Provençal, Romansh, and Scottish Gaelic. All important languages, of course, but not spoken let alone read in numbers that will move the needle on our author careers. Further, only 10 KDP supported languages are non-European and of those, Arabic, Chinese, Gujarati, Hindi, Japanese, Marathi, Malayalam and Tamil are ebook only, while Hebrew and Yiddish are paperback only. Latin is also paperback only.

Which brings us neatly to Amazon’s print reach, where the good news is this reach is better than its ebook and audiobook reach, and perhaps better than many indies realize, but still limited. We all know, of course, the issues involved trying to get bookstores to stock titles printed by Amazon’s KDP Print (formerly CreateSpace). With few exceptions it’s not going to happen. And we know our KDP Print titles appear alongside our ebooks on the Amazon product page, which is nice, and if have opted for expanded distribution. Our books may appear some online bookstores.

But how many of us realize that our print books via KDP Print may also be available on the Amazon sites that don’t have Kindle stores? My KDP Print titles are available on Amazon UAE, and Amazon Singapore, despite there being no Kindle store. My KDP print books are available on Abe Books and The Book Depository, both owned by Amazon. But also on eBay, and on any number of online bookstores around the world we probably never knew existed. My KDP Print paperbacks are available, for example, on U-Buy in Kuwait. And U-Buy Taiwan, U-Book South Korea and U-Book Japan. Or Booktopia or Angus & Robertson in Australia. Or…

Just copy your 13-digit ISBN (if you’re not sure what it is, pop along to your Amazon product page for the paperback and it will show you). Now paste that, or your author name and book titles, into Google and see what turns up. Searches like this will throw new light on our international reach and there may be some pleasant surprises. It’s worth doing this every month or so, as most global stores are supplied by third-part sellers, and these are always expanding.

Just to add here that while these may look like pirate sales they are usually legitimate. Third-party sellers simply pull the product descriptions from Amazon and advertise the books on other sites. When an order is placed with them, they place an order at Amazon, Amazon gets paid, we get our royalty, and the third party seller pockets the difference.

So let’s be in no doubt that Amazon is an invaluable asset in our quest to become global authors. But if we aspire to be serious players in the international book market, valued at just shy of $150 billion – that’s more than the global music or film industries – then we have to work with Amazon in tandem with other platforms. In other words, we need to go wide. Seriously wide, not just Amazon and one aggregator because it’s all too much hard work. Otherwise we’ll just be scratching the surface of what’s possible.

It’s not difficult to get started. We have our indie-friendly aggregators like Bookbaby, Draft2Digital, Ebook Partnership, Findaway, IngramSpark, PublishDrive, Smashwords, StreetLib and XinXii (among many) to take those first steps. All of these offer one or a combination of ebook, POD and audiobook reach. And the great thing is, none require exclusivity, so you can be getting Amazon’s invaluable reach and simultaneously reaching audiences where the Amazon sun doesn’t shine.

Just this past week or so audiobook and ebook subscription service Storytel announced plans to launch in Israel, on top of plans to launch in Thailand and Indonesia. Storytel is in 20 countries right now and will be in 40 by 2023. Amazon, we will recall from above, offers just 13 Kindle stores and 9 audiobook outlets. Digital library service Odilo is now in Zimbabwe. Storytel Russia has just announced that sci-fi, fantasy and detective fiction are the top audiobook categories this summer. The Harry Potter series has just been launched in Bulgarian on Storytel Bulgaria. In China the Beijing International Book Fair is all digital this year and a fantastic opportunity for indies to make connections.

Keeping an eye on international publishing news is a great way to realise just how exciting the global book market is, and needless to say none of the above examples involve Amazon, wonderful as it is for us.

In two weeks time (Sept. 19) ALLi International insights will take a closer look at what reach is on offer from Apple, Google Play and Kobo. But the next edition on Sept.12 will be a special report on Big Bad Wolf as it goes online for its debut in Singapore, with a staggering 20 million (no typo!) mostly English-language print books up for grabs, and how indies can get a share of the action.

Until then, here’s a list of key book fairs and festivals lining up that we might want to focus on.

N.B. This list is not exhaustive but is accurate to the best of my knowledge. So here is a call out to you, the reader, or perhaps our friends at the various aggregators. Please do submit additional info or corrections in comments so we can update the list as we go forward.