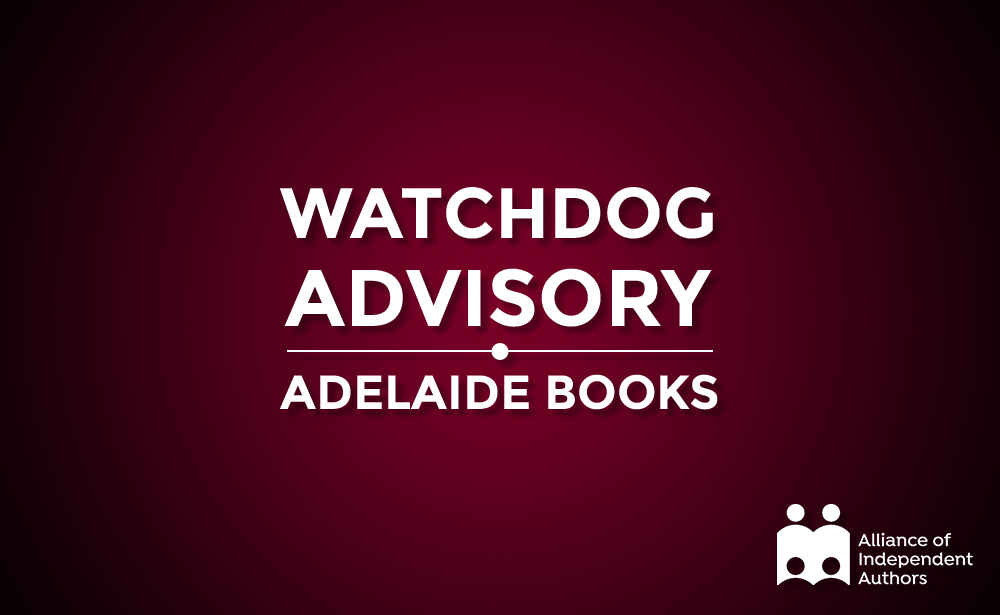 Recently, the Watchdog Desk has received a flurry of complaints and reports about Adelaide Books, a small press located in Flushing, New York, and its owner, Stevan V. Nikolic. The Alliance of Independent Authors Watchdog has written before about the “small publisher death spiral”, and why authors should heed the warning signs of this all-too-common collapse. In this Watchdog's opinion, Adelaide Books is exhibiting many of those signs, and its authors have cause for concern.

The single most vital obligation a publisher has is to provide timely and accurate statements, and to pay those royalties without delay. Authors have consistently complained about late or missing statements from Adelaide, and in several instances, no payment was ever received. Correspondence mailed to Adelaide's listed address — a rented maildrop in Manhattan — is met with silence. Email replies are often vague deferrals, or an inappropriately defensive response dripping with hostility.

Although the agreement with Adelaide spells out various benefits and services the publisher will provide, nearly all of the complainants stated that some of these services were of unusable quality or were not delivered. None of the authors I spoke with had received the marketing services and materials outlined in their publishing agreement.

And the complaints continue to pile up. Unfulfilled promises. Missed deadlines. Missing statements and unpaid royalties. Unprofessional, evasive, and defensive communication. We've seen these complaints all too often: they are the hallmarks of a publisher that's about to implode.

Mr. Nikolic has stated that Adelaide Books publishes more than 140 titles per year. He also operates a monthly publication, Adelaide Literary Magazine, which authors are encouraged to submit content to without compensation.

For a publisher with a large contingent of employees, this is a daunting number of titles to publish with any measure of professionalism. For a two- or three-person staff, it's an impossibility. Unsurprisingly, many of the complaints about Adelaide have mentioned its sloppy, slapdash work, especially with regard to numerous editing errors that were not corrected until the authors stepped in to provide their own corrections.

Adelaide Books is a hybrid publisher that claims to charge nothing for publication. In reality, it cloaks its fees by requiring that authors purchase a stack of their own books. This requirement, slyly phrased as a “token of support” in emails from the publisher, is undisclosed until authors receive the proposed terms of the contract.

The publisher also charges authors to participate in exhibitions and book signings at book fairs, an “opportunity” which requires the purchase of books and fees in excess of $1,000.00. Authors who attended these events complained that no marketing was done in preparation for the event, and as a result, they received little to no exposure.

At least one author alleges that the review copies obtained for these events were later sold as new copies, but without compensating the author for the printing costs they had already paid.

It's easy to chalk these myriad problems up to a well-meaning but overwhelmed publisher who simply took on more than they could handle. However, a search of New York's court system turned up more than a dozen cases involving Stevan Nikolic: evictions and unlawful detainers, unpaid obligations, liens, and more.

In light of this frightfully long string of judgements and defaults, it's difficult to ascribe innocent motives to Adelaide's failures to meet their contractual obligations.

You can read more about Adelaide Books in Writer Beware's analysis from earlier this year.

Right of reply was offered to Adelaide Books and Mr. Nikolic, but a response was not received before the publication deadline.