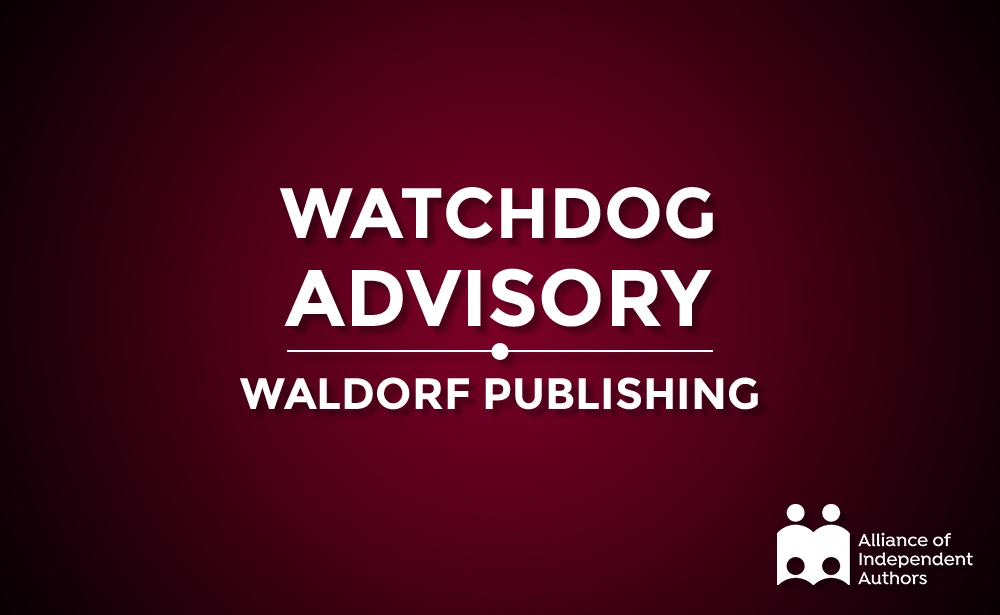 When a publisher or assisted self-publishing services enters a financial crisis, character can be put to the test. In this week's Watchdog Advisory, John Doppler looks at Waldorf Publishing.

When faced with financial crisis, some rise to the challenge. They put contingency plans into action, return rights to authors, pay owed royalties from accounts that were wisely kept separate from the company's operating funds. They face their challenges head on, they frankly and honestly confront their mistakes, and sometimes, they recover: a triumphant phoenix rising from the ashes to start anew.

Others do not acquit themselves as nobly.

Meet Waldorf Publishing, a company that appears intent on self-immolation. Waldorf and its owner, Barbara Terry, have raised alarms before. The Texas-based vanity press and its various spinoffs have been in the spotlight for their apparent ignorance of copyright, poor quality, and allegations of questionable accounting. And in typical fashion for bad operators, Ms. Terry responded to at least one of those reports by threatening a lawsuit. (I will not be posting links to those threats, as they appear on a page doxxing and harassing a consumer advocate.)

More recently, a storage unit of Waldorf authors' books was offered up for sale by a liquidator who purchased them at auction. The storage unit went up for auction when the renter defaulted on payments. (If you are a Waldorf client who has purchased books from the company, but those books never materialized, the liquidator can be reached at [email protected])

One of the more egregious examples of the latter is an amateurish, legally dubious clause asserting that “any willful slander against Waldorf Publishing” (presumably meaning any complaint about shabby treatment) will be punished by Waldorf Publishing seizing all rights to the author's books.

It seems obvious that this tacked-on clause never passed under an attorney's nose, as, among other things, it confuses slander and libel. Regardless of its likely unenforceability, the sheer audacity of this ploy to bully authors into silence is shocking.

In the final quarter of 2020, Waldorf Publishing's website was amended to state that the company “is not accepting book submissions at this time”. However, the company does appear to be actively soliciting business for its marketing services, with no evidence of success or qualifications offered.

Based on its belligerence alone, Waldorf Publishing would have earned our Caution rating. In combination with its litigious threats, its alleged failure to pay its bills, and its attempts to squeeze money from authors as they head for the door, Waldorf Publishing lands in our most severe rating category, the Watchdog Advisory.

Waldorf Publishing was offered right of reply but did not respond to our inquiry before the date of publication.

For the longest time, indie authors weren't able to enter awards like other authors. But more and more, book awards and prizes are opening up to us. Today, the Alliance of Independent Authors AskALLi highlights some of the best awards and prizes open to Indies. This is indie author friendly awards.
Read more

My ALLi author guest this episode is Tanya Anne Crosby, who first found a traditional publisher, writing romance novels that consistently made the best-seller lists. Eventually, Tanya grew weary of the tropes she was expected to follow in her genre and longed to break barriers. That's when she decided to go indie. Now, she revels in the freedom this gives her as a writer. Not only that, she helps other authors achieve the same kind of success.
Read more
View blogs by category
Sign up for the weekly blog round up
Back To Top
×Close search
Search
×
Loading...