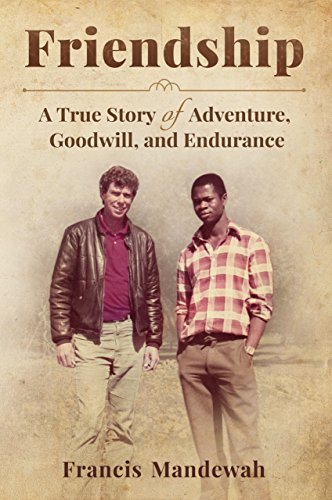 In our occasional series on what motivates self-published writers, one of ALLi's newest author members, Francis Mandeweh, shares the heartwarming story behind the memoir that he launched earlier this year, Friendship: A True Story of Adventure, Goodwill, and Endurance.

I am a naturalized African-American citizen residing in Ferguson, Missouri, the United States community that has been rocked with racial tensions in the aftermath of the shooting death of the black teenager Mike Brown, Jr. by  Ferguson police Officer Darren Wilson.

At a time when racial tensions are high and morale low in America, I write to showcase how a kind, generous, and altruistic American, a diamond transport pilot from Minnesota miraculously met me,  in Sierra Leone in 1976, when I was a fifteen-year-old poor boy,  and how this generous American man befriended me, and transformed my life forever.

From Orange Seller to Author

At the age of fourteen, having never left my impoverished village, I was sent to live with a cruel and physically abusive cousin in a diamond mining squatter camp to continue school, but I soon dropped out because ny mother and sisters could no longer afford my school fees.  Not wanting to return to live in my village, I continued to live with my cruel and abusive cousin while I sold oranges at the diamond mining headquarters by carrying the orange basket on my head, with all the profits going my cruel cousin and his wife.

In the mist of my hardships and difficulties while selling oranges I miraculously met Thomas Johnson, an American pilot who was employed by the diamond mining industry in Sierra Leone, to fly boxes of gems and alluvial diamonds, from Yengema to Freetown, where a British Airways jet would take the gemstones to London.  This was two decades before the rebel war, and the Hollywood film Blood Diamond which brought attention to that war.

How I Met Thomas Johnson 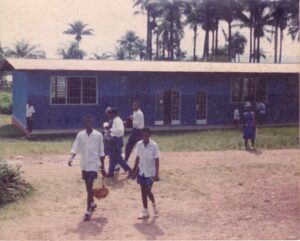 The Catholic boarding school at Yengema

After a long silence, the white man asked me why was I was not in school.  I was shocked the white man asked me this question.  I looked at him searching his eyes for his intentions.  Why did this white man care? Perhaps he wanted me to work for him?  Then I decided to share part of extreme poverty situation with him in my best awkward and broken Creole English.

“I dropped out of school because my mother and sisters could no longer afford to pay for my school fees.”

The white man sat and listened intently as I explained my impoverished situation of my sixteen years of life, leaving out only the details of my cousin’s cruelty.

Tom Johnson subsequently changed the odds against me when he voluntarily chose to befriend me, when he rescued me from physical abuse and poverty, when he gave me generous support and opportunity to a Catholic boarding school at Yengema, and when he paved the way for me to America, and when he eventually brought me to America, and paid my college tuition, room, and board at Springfield, Massachusetts, so I could realize the American dream.

Yes, I am fully aware and conscious of the sensitive and complex nature of racism in America, and yes, I have in fact experienced and endured its ravages first-hand, but I still refuse to believe that all white people are racist and or indifferent, simply because I have personally experienced the love, care, kindness, and altruistic and generous nature of a white man: Tom Johnson.

My New Life in America 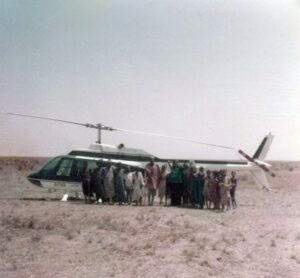 It was a white man, who out of his own goodwill and generosity befriended me, a poor black boy,  and gave me generous support that opened a new life of opportunity for me; a white man who paved the way for me to America, eventually brought me to America and voluntarily and generously paid my tuition, room and board at Springfield, Massachusetts so I could realize the American Dream.

Our friendship transcended race, and has built a positive connection between the races. We can overcome racism through friendship and positive cross-cultural relationships. Captain Tom Johnson didn’t choose me without consideration for my race, but rather I think he chose me because of it.  Without Tom Johnson, my future prospect would have been bleak. 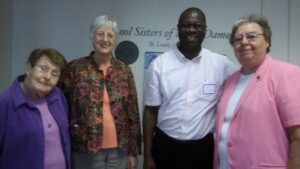 Francis with Sister Andre, Sister Josephine and Sister Rosanne at the Blessed Teresa Parish in Ferguson, Missouri, where he now works as a counselor at a correctional facility. All three of these Sisters now reside in St. Louis and all three Sisters ministered/taught at Yengema Secondary School in Sierra Leone in 1975.

My autobiography, Friendship: A True Story of Adventure, Goodwill, and Endurance, tells how through faith, courage, and determination I encountered and endured trials and tribulations on my way to America, including crossing the Sahara Desert, which almost cost me my life, and how I endured and persevered in Italy, Greece, Turkey, and finally in America. I hope it will inspire readers and lift their spirits.

OVER TO YOU If you have an unusual and interesting story to share about what inspires you to self-publish any kind of book, whether a memoir like Francis, or other genre, we'd love to hear from you.

A social justice advocate, Francis Mandewah has 14 years of experience as a probation and parole agent with the Wisconsin Department of Corrections. He is a member of Blessed Teresa of Calcutta Parish in Ferguson, Missouri, where he currently resides and works as a counselor at a correctional facility. For more information, please visit his website: www.francismandewah.com