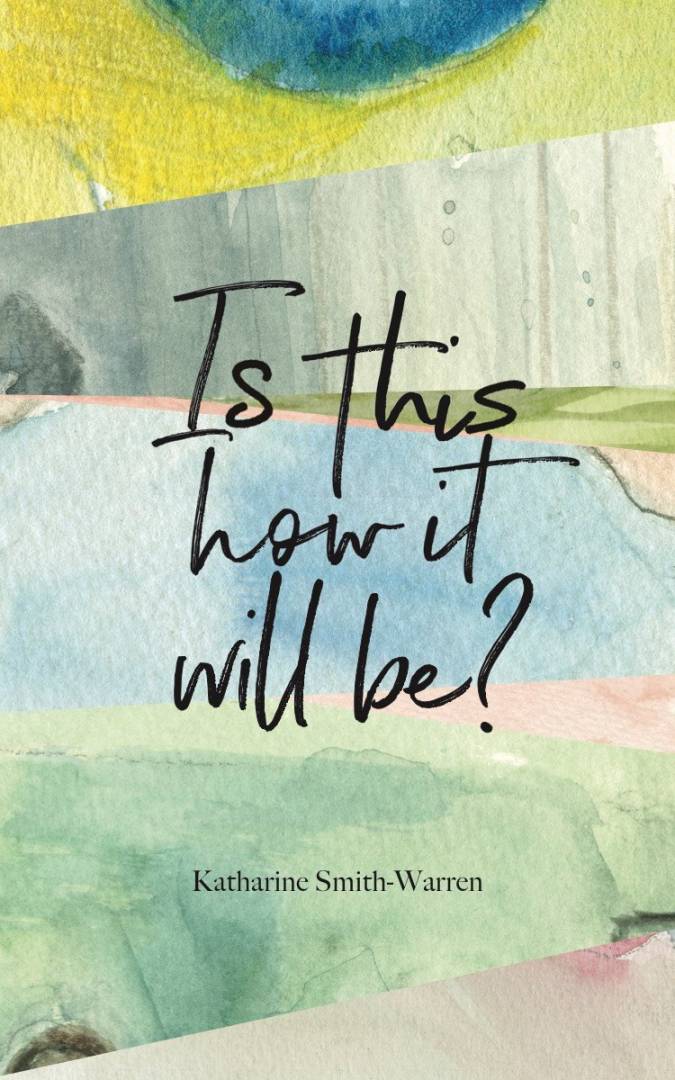 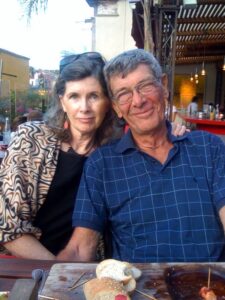 Katherine Smith Warren with her late husband, the inspiration for her memoir

Memoir is a popular genre among indie authors, and many writers include such a book somewhere along the line in their self-publishing journey, whether it is their springboard to fiction or non-fiction, or to a series of other works about their own experience. It can also be a powerful therapy for dealing with trauma or loss, and here on this blog we have been privileged to share the stories behind various authors' memoirs came to be.

Today we  are grateful to Katharine Smith-Warren for describing with such dignity and grace the natural development of Is This How It Will Be?, her memoir of bereavement, characterised by an unusual mix of prose and painting and published this week.

Writing a memoir is tough. There is no way around it. If it is going to be honest you will have to dig deep and that isn’t always pretty.  It’s non fiction, remember. The truth can hurt.

I have always kept a journal. Often at erratic intervals, but after my husband died, it became a necessity as I tried to understand what was happening to me.

It was the second time I was widowed. Years ago, my first husband died in a car accident. I was 34 and the mother of an almost 5 year old.  How I dealt with that grief is a different story.

I married again, and my husband developed a series of physical problems which were eventually diagnosed as MSA, a Parkinson type neurological impairment, untreatable and incurable.  It was seven years of increasing disability, doctors, emergency rooms and caregiving. Eventually hospice care at home for the last eight months. And then he died on a beautiful autumn afternoon.

I am an artist, and it was hard to paint as I grieved. But I still went to my studio and began to make small watercolor paintings. 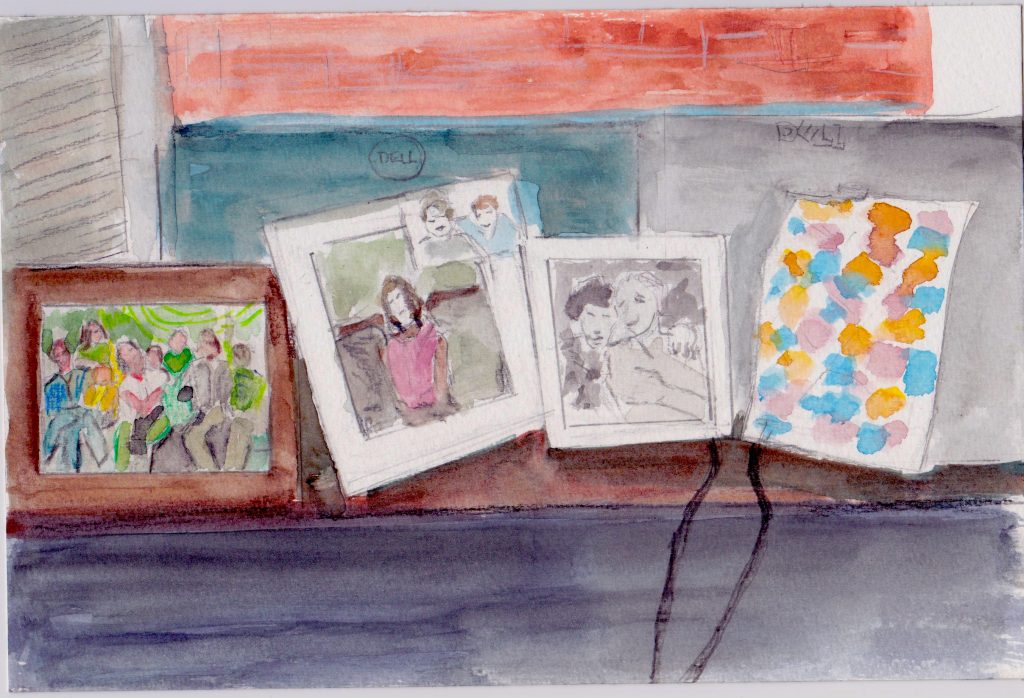 A series of small paintings

As first I thought of them as sketches or studies.  I worked quickly and intuitively and imagined I would return to them someday to make finished paintings. Or maybe I would just stash them in a file.

I’m not sure when I realized that they connected with my journal. I began selecting sentences from the journal that seemed to fit the image. And sometimes the image sent me to my journal to find the words. 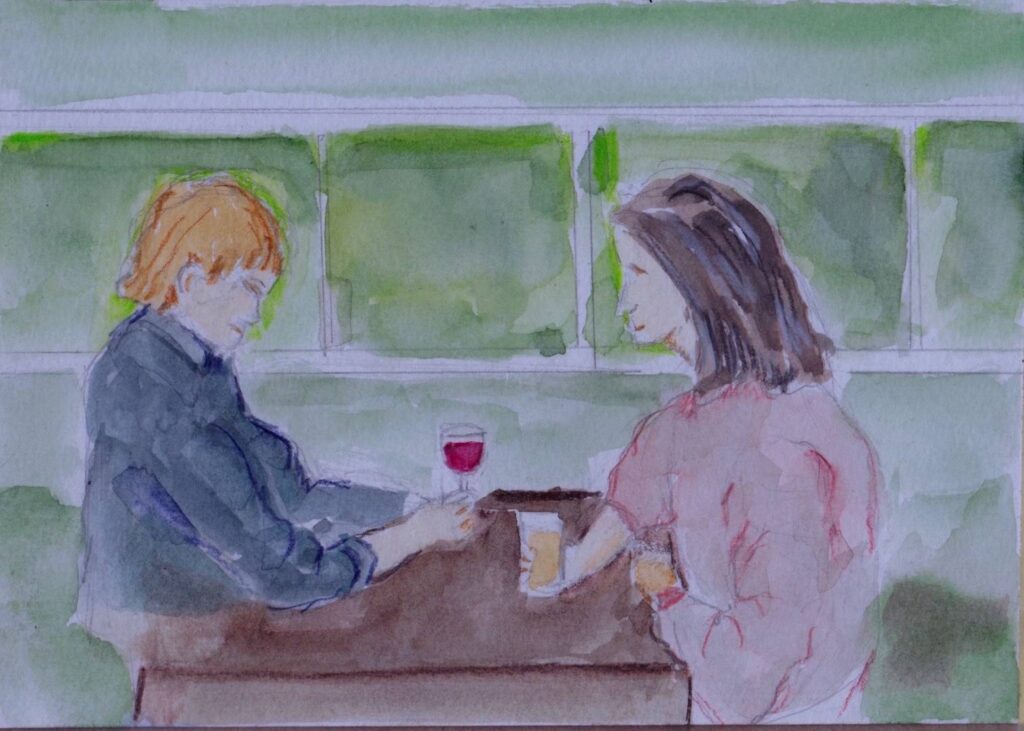 I am a private person who is not comfortable with sharing emotions so it was hard to conceive of sharing these paintings. I told no one what I was doing.

I had written a children’s book a few years ago, and I began to see a narrative in the images and words. 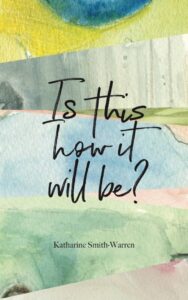 Helping others who have been bereaved

For months I kept my studio door closed or moved the paintings to a file when visitors came.  Eventually, I showed them to an artist friend. She advised me to hire a designer to put it together as a book. Even when I did that I wasn’t sure I would make the book public. It was so raw, so close to the bone.

But when I spent time with another friend whose husband had died suddenly I thought, “Maybe what I went through could help her”.

I admit until I pushed the button on Ingram to release the book, I still had fears and doubts.

(Is This How It Will Be? is now available to buy as a paperback from Amazon.)

OTHER MOVING POSTS ABOUT WRITING MEMOIRS – FROM THE ALLi ARCHIVE

Katharine Smith-Warren is an artist, writer and curator in Denver Colorado. As the founder of Art Management she created many art collections and advised municipalities and businesses on art acquisition including public art. She served as Colorado editor of Artspace; Southwestern Contemporary Arts Quarterly and has published many art catalogs including Time and Place: 100 years of Women Artists in Colorado and over 50 articles on art in Art News, Rocky Mountain Magazine, Colorado Homes and Lifestyles and others. She is the recipient of the Fountainhead award for writing.