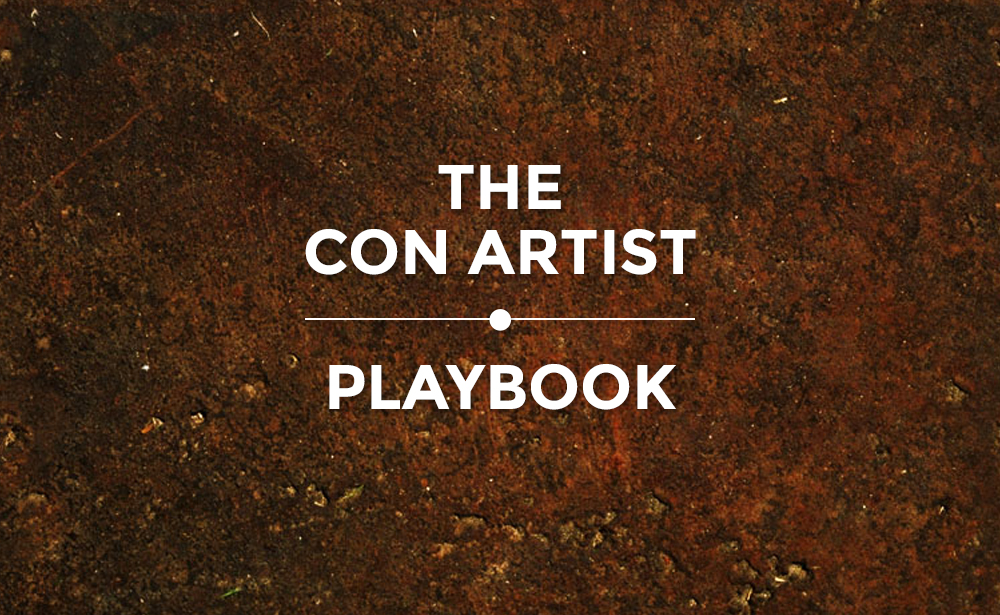 I've been involved in consumer advocacy for more than 25 years, and I've encountered a bewildering array of predatory behavior. I've confronted illegal telemarketers, crush video producers, plagiarists, fraudsters, pedophiles, publishing scams, animal abusers, fake charities, identity thieves, cyberbullies, fugitive felons, and more. But despite the vastly different circumstances surrounding each of these cases, there are reliable patterns of behavior that surface: collectively, I call them the Con Artist Playbook.

As far as I know, there isn't really a handbook instructing bad actors on how to deflect blame (and I sincerely hope nobody is inspired to pen Criminal Behavior for Dummies or The Idiot's Guide to Committing Felonies), but these cynical, manipulative tactics are so eerily consistent, I've wondered if these bad actors are operating from the same guidebook.

Individual tactics from the Con Artist's Playbook are commonplace, but meaningless in isolation. We all have bad days. When your spot one of these negative behaviors in a friend, that doesn't mean she's secretly running a pyramid scheme out of her garage. Rather, these signs and symptoms are part of a larger syndrome, a cluster of behaviors that when viewed together points to something highly suspect.

The quotes below are fictionalized, but typical of real comments I've heard from bad actors. Watch for them in the wild. And if you see these responses from a publishing service of any kind, run.

If I Hide, They'll Go Away

Depending on the offender's personality, this may be their first resort, or a later response when other tactics fail. A favorite tactic of corporate offenders, refusing to respond to questions assumes that people will lose interest and promptly forget about the controversy.

Silence only worsens suspicion, and the offender then resorts to other forms of evasion.

My Public Misbehavior is Private

If the offender can't hide from the issue, they will attempt to silence it, ruthlessly stifling any discussion on forums they control and avoiding public forums.

This particular behavior is problematic in that some matters are private. However, it's hard to give that defense much credence when the issue is a highly public one, such as the charity operator accused of defrauding donors of hundreds of thousands of dollars, or a hypocritical “family values” politician who gets caught with his pants down (literally and figuratively).

I Never Did That, But So What If I Did?

When it becomes clear that they can't hide from the issue or deflect the blame, the offender may try to minimize the offense or their role in it.

Downplaying the magnitude of the offense is a step toward discrediting the accuser and the evidence presented against them. It may also be a step toward rallying their supporters against the whistleblowers.

Guilty individuals fear prosecution, so perhaps it's no surprise that they view the legal system as a weapon to be wielded against one's enemies.

Cease-and-desist notices with threats of litigation are a favorite tactic of bad actors. Sometimes they're poorly written, laughably amateurish efforts copied and pasted from internet samples. (One such letter received by yours truly still had the “YOUR NAME HERE” placeholders intact.) Other times, they're perfunctory form letters rattled off by a strip mall attorney for $75.

It can be unnerving to receive one in the mail, but they're usually toothless: the last thing a criminal wants is to actually set foot inside a courtroom. Bad actors know these are intimidating, and dispense them like candy from a pinata.

As pressure mounts, the offender invariably blames “haters” for their woes. Adopting the role of the innocent victim will become the offender's principal defense, with any setbacks blamed on a nefarious cabal of black-hearted individuals who are out to destroy the offender's happiness. They may spin elaborate tales of conspiracies, particularly if law enforcement has become involved.

In one case I assisted with, a convicted animal abuser announced that the arresting officers, the judge, the newspapers, and Facebook had all been compromised by “the haters” and were conspiring to destroy him, and that's why things were going so badly for him in court.

In another case, a fraudster angrily informed the court that it didn't matter what verdict was handed down, because he knew that everyone involved had been paid off. After it was thrown out he was going to singlehandedly expose the corruption in our legal system — starting with the judge.

In the end, neither argument was persuasive.

In the offender's narrative, they are being harassed by bitter, jealous people who just want to see everyone else be as miserable as they are. So, to show their lack of concern, the offender will put on a display of good-natured cheer, taunts, and over-the-top vitriol.

I have little sympathy for those who prey on others, but I'm always sad to see this phase. The bravado and bluster are as natural as a $12 toupee in a windstorm. This is the point where the anxiety and stress of maintaining a lie bleeds through to the surface.

A common manipulative technique is the dramatic “Goodbye forever!” moment, in which the offender announces that they are leaving social media (or an industry, or a group) forever because the haters have driven them away.

I imagine them flouncing through the doorway, then pausing at the threshold, waiting for someone to plead with them to reconsider.

After a suitable absence of several days, the offender returns to announce they've changed their mind, to the applause of their supporters.

Sockpuppets are fake identities used to manipulate the discussion, attack others by proxy, influence bystanders, or bring shame or disfavor on a rival group by impersonating them. The use of sockpuppets to disseminate misinformation and political rhetoric gained the focus of the media during the 2016 election, but the practice has been employed for centuries in the form of shills and confederates.

When supporters and sympathizers are in short supply, or are not vocal enough in their support, the offender may invent their own army of sockpuppet supporters — or avengers.

An author accused of plagiarism used dozens of sockpuppets to attack her victim with 1-star reviews, vicious comments, trolling, hate mail, and threats. It was later discovered that the perpetrator — a schoolteacher by day — had been using the identities of her young students to wage her campaign of harassment. And when that was exposed, she turned to the next page in the Playbook, and began wailing about how she was the victim…

With a sudden shift in tone, the offender reveals that they've been under tremendous stress — which is undoubtedly true. Unfortunately, this is used as leverage against their enemies. They will hint at serious health and financial problems brought on by “the haters”. Screenshots of hate mail and angry comments will be shared with supporters as evidence of the horrible things they've had to endure. This will be paired with self-serving comments about all the good things they've done, their charitable donations, the long hours they've spent helping the community, only to be persecuted by such evil people.

In some cases, the offender truly believes they are the victim, but more often, it's a calculated attempt to manipulate supporters and drum up sympathy. Sometimes, the woebegone status updates are accompanied by a plea for donations either from the offender, a supporter, or a sockpuppet.

The goal is twofold: on the one hand, the offender solicits sympathy, encouragement, and reassurance that they're in the right. On the other, they throw gasoline on an emotional fire in hopes that less-restrained individuals will retaliate on the offender's behalf.

You Can Borrow My Pitchfork

After Blame the Haters and The Pity Party have supporters calling for a whistleblower's head, the offender may try to incite their followers to retaliate, harass the victim, or even commit violence.

Harassment doesn't often cross the boundaries of the internet, but when it does, it can be deadly. Stalking, arson, assault, and murder have all resulted from incitement on the internet. It's a serious concern that should not be dismissed.

Confronting injustice is a noble pursuit, but it must be done with care. Confrontation is inherently emotional, and there are many on the internet today who allow those emotions to override their common sense.

Don't be one of them.

Venting your anger at an injustice may be emotionally satisfying, but it's counterproductive, and when multiplied by hundreds or thousands of similar voices it can quickly spiral out of control. Note how many of the tactics above involve the criminal playing the victim, or turning the tables on an accuser and making them out to be the bad actor. That's made infinitely easier when the real criminal can point to acts of aggressive harassment as proof that they are the aggrieved party.

And that person who made one stupid, offhand remark that offended, or briefly stepped over a line they shouldn't have? The behavior deserves condemnation, but they don't deserve to have the hyenas of the internet rip them to shreds.

The angry mob does not understand proportion, which is why justice doesn't come at the hands of a bloodthirsty crowd. It comes through patient investigation, determination, and unrelenting calm.

Be the person who sows peace in times of trouble.

Beware that, when fighting monsters, you yourself do not become a monster… for when you gaze long into the abyss, the abyss gazes also into you. — Friedrich Nietzche

Over to You
Have you witnessed these behaviors in the bad actors you've encountered? Let us know in the comments below, but please, out of an abundance of caution, do not identify names.