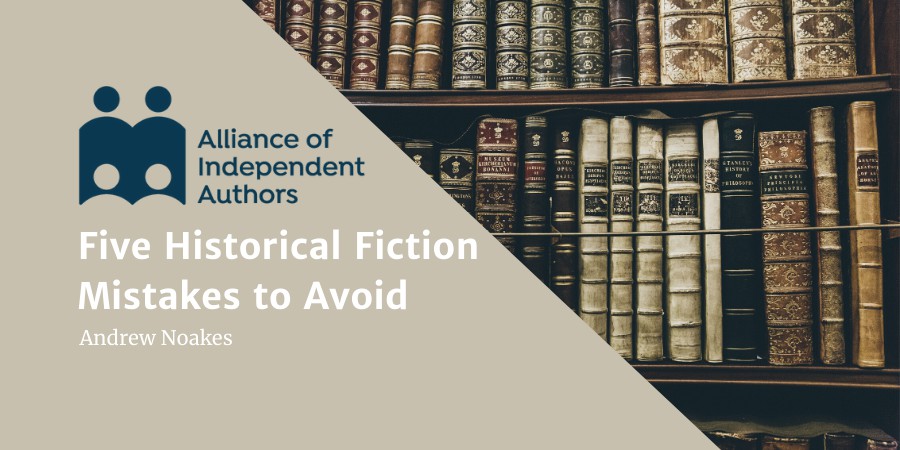 The Alliance of Independent Authors has members writing in all sorts of genres. But today, Andrew Noakes, founder and executive editor of The History Quill is here to go niche. Andrew discusses historical fiction and the most common mistakes you should avoid when writing in the genre.

Writing historical fiction is most often a fascinating, inspiring, and invigorating process, but sometimes it can also feel like running a gauntlet. Nothing is more likely to strike terror into a historical fiction writer than the inescapable idea that something, somewhere in their manuscript may be historically inaccurate. But that’s not the only risk. As a specialist historical fiction editor, I’ve seen a whole range of mistakes common to the genre. Have no fear, though: below I have outlined the top 5 mistakes I encounter, complete with tips on how to avoid them.

Andrew Noakes, founder and executive editor of The History Quill.

Historical Fiction Mistakes: Too Much History, Not Enough Story

If you’ve spent months – often years – immersing yourself in your chosen historical period, researching everything from the prevalent fashions to how people went to the toilet, you’ll no doubt feel the overwhelming urge to share everything you know with your reader.

But give yourself a reality check.

In truth, 90 per cent of the details you unearth in the course of your historical research should never be used in your novel. If you ignore this, the history will end up drowning out the story. While historical fiction readers want to be immersed in an authentic historical world, remember that what they’re ultimately looking for is a story, not a history book. This means you must selectively deploy your knowledge rather than dumping everything you know onto the page.

One good way of dealing with this is to seamlessly integrate the history. For example, it’s better to show the reader what kind of weapons would have been used during your period in a battle scene that’s integral to the plot rather than by having your protagonist take a random trip to the armoury to inspect them.

While you shouldn’t overwhelm your reader with every imaginable detail about your period (see above), selective use of some of the small details of every-day life can really help to create a sense of authenticity. The problem is when writers get these details wrong.

We’ve all seen the kind of mistakes I mean. The protagonist of a Regency novel making their own introductions at a public ball rather than waiting to be introduced. Or people eating potatoes in Europe decades or centuries before they were first introduced. Errors such as these jar the reader out the story, making them feel as if the past is being carelessly and inaccurately rendered.

You need to get the small details right when they make an appearance. For this, do your research. We’re fortunate that some really useful books have been written on every-day life during different historical periods, from Lionel Casson’s Life in Ancient Rome to Toni Mount’s Everyday Life in Medieval London.

Primary sources can be useful too, particularly diaries and letters written by travellers or immigrants, who were more likely to find the ‘ordinary’ features of life noteworthy.

Historical fiction writers are, understandably, often very focused on historical accuracy. Most of the time, this is a good thing and helps to guard against mistakes. However, if they become too myopic or uncompromising, a different problem can develop: too much accuracy.

What? Too much accuracy? Yes, it is possible. Consider this:

How fares thy faire doghter and thy wyf?'

And John also, how now, what do ye heer?'

This is how people spoke to each other in the late 14th century. Well, kind of. These lines of dialogue come from The Canterbury Tales, and they are a good example of Middle English.

Now, clearly, most readers wouldn’t want to read a historical novel where all the dialogue is written in Middle English. If you wrote such a book, you would be taking accuracy just too far. And yet readers don’t want your dialogue to sound modern, either.

The answer is a concept called historical authenticity, which often diverges from strict historical accuracy. It means creating the sense of accuracy without necessarily enforcing the full reality of it upon the reader.

This is particularly important when it comes to language. With historical dialogue, the trick is to avoid words and phrases that sound overly modern, focus on using neutral words that feel more or less at home both in the modern day and in earlier periods, and include a few archaic – yet still intelligible – words and phrases here and there to give the reader a good sense of the period.

Ancient Romans thought it was fine to watch gladiators fight to the death, Europe’s role in the slave trade was considered morally acceptable by many at the time, and attitudes on race and gender have come a long way over just the last hundred years. In the past, people had different ingrained values, views, and norms. Many of them would be considered backwards today, and some of them downright odious.

So how do we create characters that are historically accurate while not alienating or frustrating modern readers? Sometimes, historical fiction writers go too far in one direction, either oversteering and making all of their characters unrealistically forward-thinking, or showing no sense of nuance or sensitivity in their depiction of these issues.

In navigating this question, the first thing to say it that not all historical people conformed to the predominant beliefs of their time. Though the slave trade may have been considered acceptable by many, a vocal lobby opposed it and eventually converted the majority to their cause. There were progressive voices in the past on issues of race and gender, just as there are now. You can legitimately go down the route of including characters whose opinions contradict the prevalent views of their time, or whose lives do not fit into the common mould, as long as there is a basis for it in history – and there often is. This is definitely one way out of the problem, as long as you don’t make every character unconventional and as long as your unconventional characters clearly appear unusual in your wider story world.

Of course, most people did still hold views and live lives that were typical for their time. My advice is to show sensitivity, think carefully about your use of language, and pick your battles. If you are respectful, nuanced in your approach, and have done your research, most readers will appreciate the authenticity of your portrayal.

Historical Fiction Mistakes: Bending the Truth too Much – or Not Enough

This is distinct from the accuracy and authenticity issues discussed above. Here, we’re talking about how to balance historical accuracy with creative license. This includes altering timelines, depicting real-life historical figures doing things they probably didn’t actually do, and throwing in some dramatic flourishes that may not strictly be rooted in fact, among other things.

There are as many opinions on this as there are historical fiction writers, so the first thing to recognise and accept is that, whatever you do, you’ll probably annoy someone. The most important thing you need to do is work out what your own rules are, then follow them. That being said, here is some general guidance that you should consider:

1) It’s a good idea to include a historical note at the end of your story explaining where you have deviated from history and why. This can help to disarm readers who have taken an exception to particular decisions.

3) If you’re going to alter a verifiable fact or invent something about a real figure, make sure you have a good reason, make sure the alteration is plausible, keep it to the necessary minimum, and be aware that the more verifiable something is and the more central to history it is (or the bigger the real-life figure), the more risky it is to change it.

Historical Fiction Mistakes: Don’t be too Hard on Yourself

This is my final piece of advice. It’s all too easy to get overwhelmed by the possibility of making one of these mistakes and let that sap your confidence and motivation. Don’t let it. Everyone makes mistakes; even books by bestselling authors contain errors. Be conscious of these pitfalls, yes, but most of all, enjoy the process of writing.

What tips and tricks do you have for writing historical fiction?