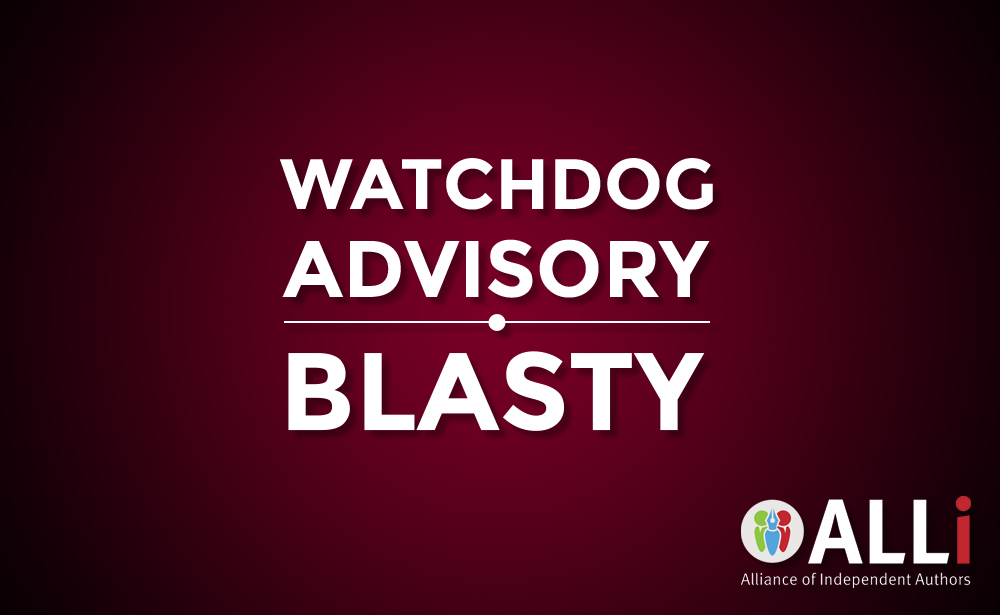 Blasty has been a recommended service provider — at least until last year, when the company's customer service abruptly imploded.

ALLi's Watchdog Desk has received more than twenty complaints of Blasty failing to respond to customer service inquiries, failing to honor cancellation requests, and continuing to charge customer credit cards and bank accounts after cancellation. Some complainants felt they had no other recourse than to cancel their credit cards, or file fraud claims with their banks.

Although Blasty continues to send out takedown notices, these are noticeably delayed. Customer support inquiries have been met with silence.

It's a baffling turn of events for a company that was once a highly responsive and respected member of the publishing community.

After six failed attempts to reach Blasty staff over the course of three weeks, including online submissions and emails to [email protected], I began to look for other means of contacting someone at the company. I reached out to Olivier Zetlers, the original CEO of the company, through email and LinkedIn private messaging. Mr. Zetlers' LinkedIn profile lists his tenure at Blasty as ending December 2018; nonetheless, I was hopeful that he could put me in contact with the current operators of the site, or provide insights into the sudden lapse in customer service.

Four days later, on April 10th, Mr. Zetlers responded on LinkedIn. In his message, he clarified that he is still the CEO of Blasty, that the company is still in operation, and asserted that they respond to all emails from users.

That same day, I provided him with the fruitless history of my attempts to contact someone at Blasty, as well as the email addresses and summary of issues for five of the dozens of authors who have reported problems with Blasty. (Complaints made to the Watchdog Desk are confidential; this information was shared with the explicit permission of those authors.)

Five days later, he responded with further information about those accounts: of the five accounts cited, two were already cancelled, he said, and three more had just been taken care of. He also explained that Blasty was “going to implement a much easier way for users to cancel their account,” to go live by the first week of May.

Mr. Zetlers provided no information about the source of the disruption, or what steps were being taken to correct it. I again requested information on the lapse in communication. I also alerted Mr. Zetlers to the fact that ALLi had suspended Blasty's Recommended status pending an investigation, and requested a statement from the company for inclusion in this article.

I again received no response. Follow-ups sent to Blasty's support via their online form triggered an automated response letting me know that my request had been received, but, like so many authors, no further response followed.

Worse still, two of the authors who lodged complaints with ALLi report that they are still being charged for ongoing subscriptions, despite Mr. Zetlers' assurance that their problems had been resolved.

I had been hoping that a technical issue was at the heart of Blasty's customer service issues, that perhaps they simply were not receiving the communications and were unaware of customers' issues. Unfortunately, the company's staff and CEO have failed to respond to multiple inquiries via email, online forms, and LinkedIn, which makes a technical cause extremely unlikely. I cannot speculate on the cause of Blasty's deterioration; I can only note that it's an extraordinary departure from their usual responsiveness.

A fundamental tenet of ALLi's Code of Standards is service: a company serving authors must be accountable for their work and keep clients informed about the work they do. A company that cannot be trusted to perform its accounting duties and which cannot be reached in the event of a dispute has failed its clients.

Accordingly, we have downgraded Blasty to a Caution rating. Until the company resumes normal communications, and cancellation requests are being honored consistently, authors may wish to reconsider any paid subscriptions.

Blasty was offered right of reply, but did not respond before publication of this article.

What have your experiences of Blasty been?

Other Posts From The Watchdog

ALLi Watchdog Posts for 2017: A Round-up of Best Practice Advice