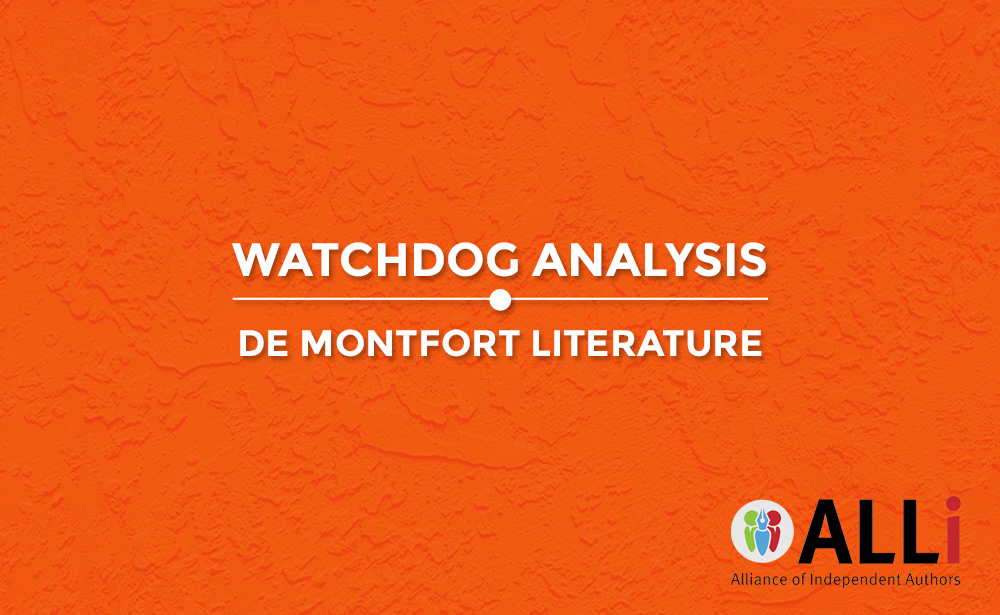 We've seen quite a bit of media buzz recently about a new startup, De Montfort Literature (DML). DML's novel venture — if you'll excuse the pun — promises to select writers algorithmically, and pay selected writers a £24,000 annual salary (about $31,000 USD) while they write their books and cultivate their talent.

To an aspiring or fledgling author, this sounds like a dream come true. The goal of many professional authors is to earn a living wage from their writing, a goal that requires years of hard work, patience, and a bit of luck. Then along comes a wealthy investor offering to finance a full-time writing career.

The rate is slightly lower than the average full time salary (£27,600) but it skips the slow climb that most authors face and allows them to jump straight into a full-time career as an author.

But, as always, the devil is in the details. In this analysis, we'll examine the pitfalls of this new company with an unflinching eye.

Jonathan De Montfort, the individual behind this venture, is a successful hedge fund manager who credits his firm's success to “a mathematical system based partly on the Fibonacci sequence”. He claims this system has successfully predicted financial markets, the 2008 crash, and Brexit, and other events, and now believes it can be applied to literature. “I have taken what I know about hedge fund management and applied it to literature,” reads a quote on the company's website.

However, De Montfort's experience with publishing appears to be extremely limited; his first novel, Turner is scheduled to be published on August 31st of this year.

In a June 1 interview with The Guardian, De Montfort's view of publishing becomes more apparent. He says,
“The traditional publishing models for fiction writers are littered with obstacles. Securing a literary agent is a lottery, and self-publishing is costly and time-consuming.” DML's website positions their approach as a “new, alternative route to the traditional agents and publishers” which will “make being a novelist a valid career choice…”

The thousands of career authors who are earning a living wage from their “invalid career choice” may take exception to those comments.

DML's website also stresses that they are open to any genre. A one-size-fits-all approach does not work for all books. Does the company have the expertise and understanding of the market to sell books across a wide range of genres?

De Montfort may believe his venture to be an innovative new approach (or, as his website puts it, “a totally new model” and “a game changer for the fiction industry”). But startups regularly arrive on the publishing scene promising to revolutionize an industry they have minimal experience with, and the results are rarely good.

Consider Inkitt, who debuted with similar Jedi hand-waves and claims of “an algorithm that predicts bestsellers by analyzing reading behaviour”. The founders' experience in sales and software development did not translate to experience in publishing.

Publishing is a turbulent sea, and those entrepreneurs who leap in without understanding the depths of those waters often drown. Sadly, they may drag scores of novice authors down with them.

The lure of a full-time salary hides a sharp hook

While the fine points of DML's contract are unknown at this point, the points that have been publicly disclosed are hugely problematic.

Several of these terms are particularly odious in a publishing contract.

Non-compete clauses have the potential to cripple an author's career and income. Sweeping rights grabs deprive authors of assets that are potentially far more valuable than the original work. And even if it's enforceable in your jurisdiction, claiming ownership of an author's ideas should be an immediate deal breaker for any publishing contract.

According to Mr. de Montfort, the ownership of ideas is limited to the characters and plots mutually agreed to by both parties; it is not a sweeping claim to any ideas the author may come up with during their term at DML. Technically, the author retains ownership of the copyright, but licenses the content and all rights, subrights, and options exclusively to DML unless the author chooses to buy back those rights.

Promoting your authorial brand, which no longer belongs to you

DML states in its FAQ that “We are looking to promote you as an authorial brand.” However, that authorial brand is under the exclusive control of DML for years. The company claims ownership over your writing and the very ideas of your books, and has the right to hire less qualified authors to churn out content with your name on it long after you've left the company.

But, if you wish, you may buy back the rights to your creativity and your name for an undisclosed sum.

What's fifty percent of nothing?

DML's FAQ promises authors 50% of sales, after “all costs are taken into account”. These costs include “salaries, production costs, and marketing”. (The nature of those salaries is not explained in DML's FAQ. Does that include the £24,000 salary paid to the author? If so, we've seen that business model before. It's called an advance against royalties.)

There's a phrase to describe the kind of open-ended costs DML lists above: Hollywood accounting. The television and movie industry is infamous for using creative accounting methods to inflate the recorded costs of a project in order to downplay profits. For example, Harry Potter and the Order of the Phoenix earned $940 million at the box office on a $150 million budget. Yet, on paper, Warner Bros. claimed that the film resulted in a $169 million loss. The studio claimed distribution fees of $212 million which the studio paid to — surprise, surprise — its own subsidiaries.

By claiming a loss in this way, studios can minimize their taxes and reduce royalties to a fraction of their actual value.

Hollywood accounting is why authors must be extremely wary of royalties based on net profits, or a percentage of profits after expenses. It's all too easy — and perfectly legal — for a publisher to claim tens of thousands of dollars in marketing expenses, salaries, and other fees paid to entities under their control. If you're being paid a percentage of net after costs, this creative accounting cuts deeply into your income.

We haven't seen the state of DML's accounting yet, but the cynic in me notes that a hedge fund manager whose raison d'être is amassing wealth will almost certainly be looking to maximize profits.

Literary sweatshops are not the future of publishing

De Montfort assures us that DML is born out of a desire to elevate authors, and to invest in their future. But no matter how benign those intentions may be, framing authors as salaried employees opens the door to dangerous, even dystopian possibilities. I do not relish a scenario in which authors are simply human resources to be hired and fired at the whim of an algorithm, where creativity is subject to quotas and mandatory targets, and most importantly, where the newfound independence and agency of authors is sacrificed for the promise of a paycheck.

DML does not specify how many books an author will be expected to pen, stating only that the number “depends on the author and their ideas”, and that they will be “expected to hit certain targets”. What are those targets? 2,000 words per day? 10,000? 15,000? We just don't know.

And therein lies the primary concern with DML's contract and business model. It requires the author to have faith in de Montfort Literature's good intentions, yet enables a raft of potential exploitation. It may yet turn out that DML is an incredible boon to authors, and that De Montfort's good intentions are backed by good faith actions. Money does flow toward the author under this system, but as it stands, the potential harm inflicted by the restrictive terms of DML's employment offset the benefit of a steady paycheck.

Good intentions are commendable, only a well-crafted contract that protects the interests of both parties will save authors from being exploited.

In the best case scenario…

In the worst case scenario…

Which scenario will be closer to the truth? We'll have to wait and see, but I would not want to be the guinea pig for this experiment.

De Montfort Literature did not respond to our request for comment before the article's publication.

De Montfort stresses that the exclusive licensing and buyback provisions are only in place to protect DML's investment in the author. The goal of DML is to cultivate storytellers and develop their skills and branding. But, to help guide the author, the author must surrender some control. “We are their total management agent,” he says.

When asked whether the company would continue to publish books under the author's name after they leave DML, de Montfort pointed out that the company only has rights to the stories the author has licensed to DML. Authors record their ideas and pitch them in an interview, and if DML accepts the proposal, the defined plotlines are licensed exclusively to the company, under terms that are clear to the author and mutually agreed upon.

However, if the author leaves the company before DML has recovered their investment, de Montfort does not mince words: “We are going to monetize that author's name, unapologetically.”

In this Watchdog's view, Jonathan de Montfort is flush with good intentions and exhibits a genuine passion for literature. However, the direction DML takes in its evolving strategy remains to be seen. The company may yet shed some of the more onerous terms in its business model, establishing itself as a fair and equitable option for authors seeking traditional publication, and an incubator for rising talent. But it could just as easily descend into exploitation and abuse, particularly if the company changes hands or adopts a more mercenary stance.

We'll be watching closely to see which path this unusual venture takes.

What are your thoughts on De Montfort Literature's business model? Does a steady paycheck offset DML's restrictions on your career? Do you trust them to treat authors fairly? Let us know in the comments below!