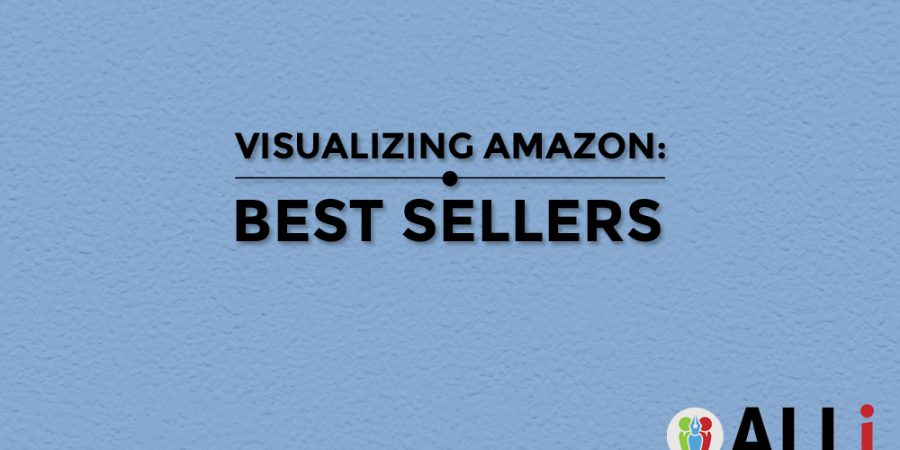 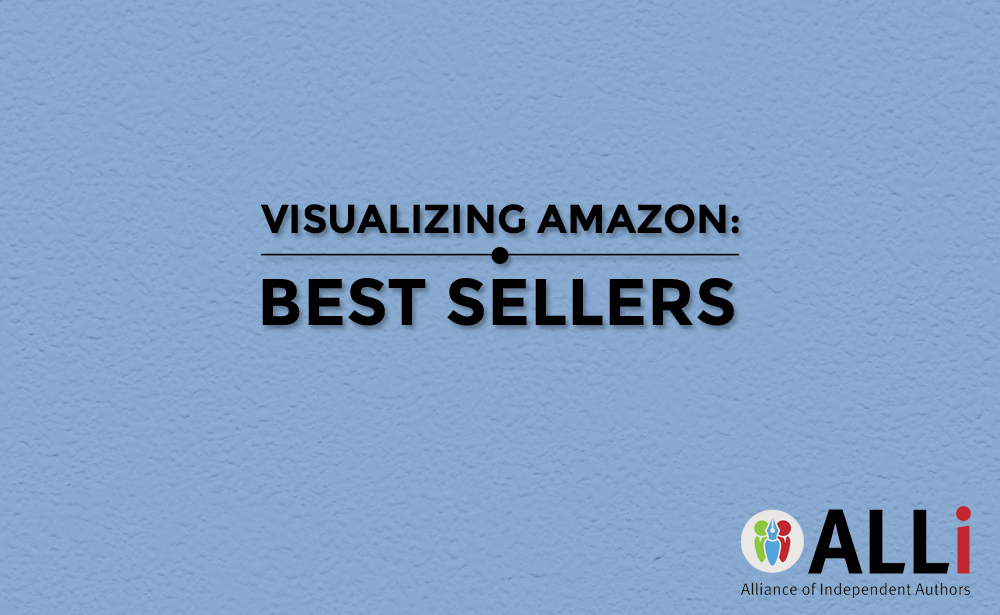 Beginning in the last half of 2016, many indie authors reported sharp declines in their Amazon sales. Some wonder if a global slump in sales could be to blame, while others point to the rise of Amazon’s imprints as a possible cause. More than a possible cause: I’ve heard authors express absolute certainty that Amazon is using its corporate might to shoulder aside non-Amazon imprints.

It’s that latter theory that prompted me to examine Amazon’s top sellers.

I took a long walk through Amazon’s pages, looking for interesting patterns that might shed light on the situation. Ultimately, I decided to focus on the Top 100 Paid lists for ten relatively high-level Amazon categories, a total of 1,000 titles. It’s a tiny sample size in light of Amazon’s 5.1 million ebook catalog, but if Amazon is gaming its own system to gain an advantage, it would likely be reflected in the top-selling titles.

Borrowing a page from the data demigods at Author Earnings, I grouped each publisher into one of the following categories:

In the images below, each square represents one title on the Best Sellers list for a genre, laid out from left to right in rows of 10. Keep in mind that this experiment looks at only one moment of Amazon’s volatile best seller rankings. 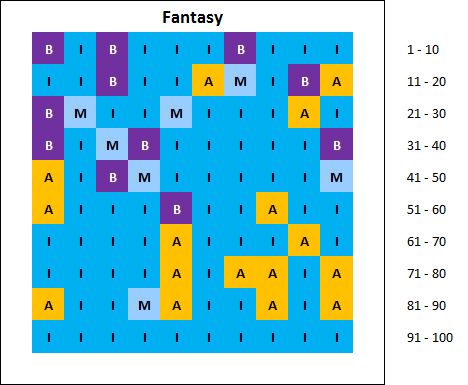 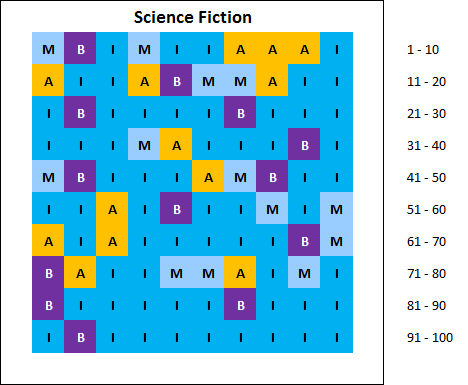 Self-published authors make up more than 60% of the best sellers in Science Fiction, while the remaining slots are divided evenly among Big 5 imprints, Amazon imprints, and multi-author imprints. Penguin Random House accounts for half of the Big 5’s hits in this genre. 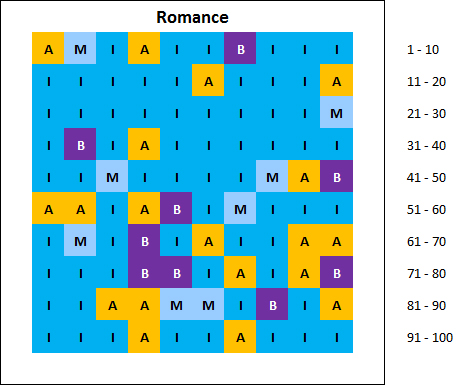 Indie authors also fare well in Romance, securing 64% of the best seller slots. Amazon imprints come in a distant second with 19% of the slots, mostly via the Montlake Romance imprint. 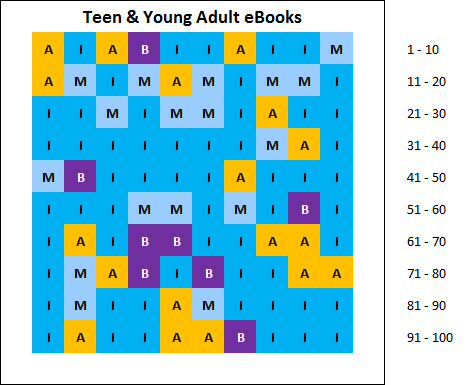 Teen & YA fiction is another stronghold for indies, who represent more than half of the best selling titles. Surprisingly, most of Amazon’s best sellers here don’t originate with their Teen and YA imprint Skyscape, but rather with 47North, their imprint for sci-fi, fantasy, and horror. 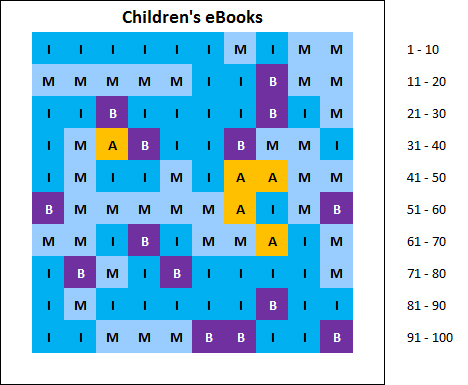 Harry Potter consistently rules in the Children’s eBooks chart, and true to form, J.K. Rowling’s digital imprint Pottermore — which we have categorized as a single-author imprint — comes close to a clean sweep of the top 10 slots. Even excluding these outliers, single-author imprints hold more than a third of the best seller slots. Amazon’s Two Lions imprint fails to roar in this category, holding only five slots on the list, all at the 30th percentile or below. 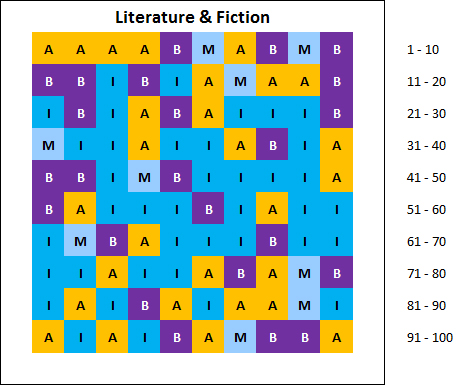 In the broad, catch-all category of Literature & Fiction, the charts are more evenly divided. Indies hold a slight edge thanks to the category’s preponderance of romance and erotica titles. 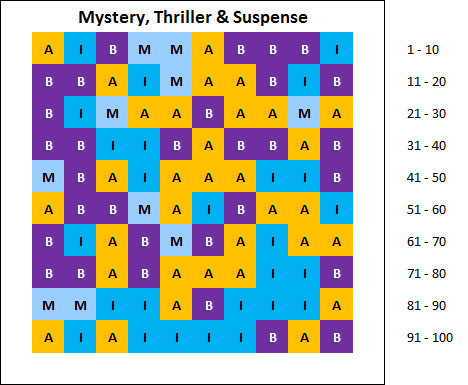 This is a genre typically favored by traditional imprints, and competition is fierce. Amazon imprints are the dominant force here, swallowing up a third of the best seller slots. Another third is divided among the Big 5 imprints. Hachette’s performance is particularly weak with only two titles in the Top 100 for this genre. Indies claim a quarter of the best seller slots, primarily towards the end of the cutoff. 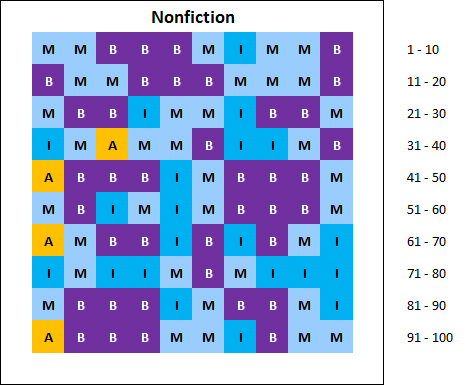 Big 5 imprints are strong in this category. Of the 39 Big 5 titles in the Top 100, 14 belong to HarperCollins imprints. Independent publishers like W.W. Norton, Callisto Media, and Bonnier Corporation take second place with 36% of the Top 100, and self-published imprints make up a respectable 21% of the field.

If there is any truth to the suspicion that Amazon is algorithmically manipulating what customers see in order to favor Amazon imprints, the practice hasn’t been applied to nonfiction titles: only 4 titles from Amazon imprints are in the Top 100, all ranking worse than the 40th percentile. 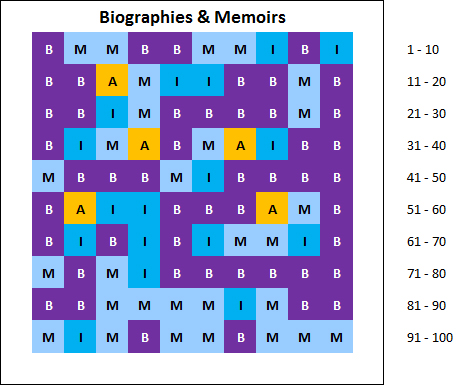 Big 5 purple dominates the Memoirs chart, consuming fully half of the best seller positions. Penguin Random House and HarperCollins make up the bulk of these Big 5 titles. Like Children’s eBooks and Nonfiction, Amazon imprints account for only 5% of the Top 100 titles. 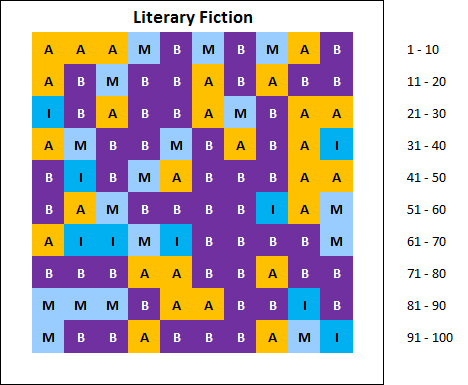 Pressured by Big 5’s dominance of the genre (47% of the best selling titles) and the relatively new incursion of Amazon’s Lake Union Publishing (25%), independent authors fared significantly worse in Literary Fiction. Less than 10% of the best seller slots are held by indies.

These charts can be distilled into the summary below (click to enlarge). 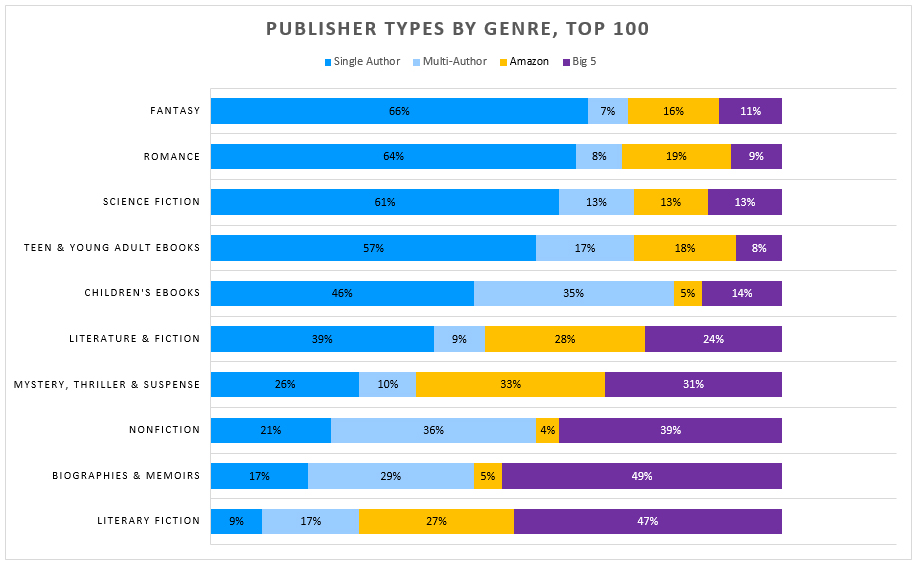 A curious thing happens when you sort these genres by the percentage of Single-Author Imprints. In general, the larger the Big 5’s share, the smaller the indie authors’ share, and vice versa. That sort of tug-of-war isn’t apparent from any other ordering of the data. This may be coincidental, but it’s worth examining whether Amazon’s share remains relatively constant while other publishers are in flux, or grows at the expense of those publishers.

The charts above offer an intriguing glimpse at how various publishers are represented in Amazon’s Top 100 best seller lists. However, it is important to remember that they are merely snapshots, a very thin slice of data observed at one brief moment in history. Like a yearbook photo taken in the middle of a sneeze, the image they present may be contorted by unusual events.

With regard to the theory of Amazon manipulating sales, it’s true that there are a host of ways in which Amazon could potentially favor its own products to the detriment of others. Amazon has near-total control over pricing, advertising, recommendations, reviews, shipping, communications with customers, reporting of statistics, and the display of products. Any of these factors could be used to tilt the playing field in Amazon’s favor. But if Amazon were using these tactics, surely there would be a higher number of Amazon imprints in the upper echelons of their best seller lists.

Fortunately, there is no sign that Amazon has its finger on the scales. I have seen no evidence of algorithmic manipulation of Amazon’s search results, sales rankings, or reviews to favor their imprints. In the short term, Occam’s razor applies: the rise of Amazon’s imprints may simply be due to a potent combination of quality books and savvy marketing.

We will continue to gather data in the coming months to look for trends and noteworthy shifts in the numbers.

OVER TO YOU
What are your thoughts on the success of Amazon’s imprints? Do you believe Amazon is playing fair? Let us know in the comments below!