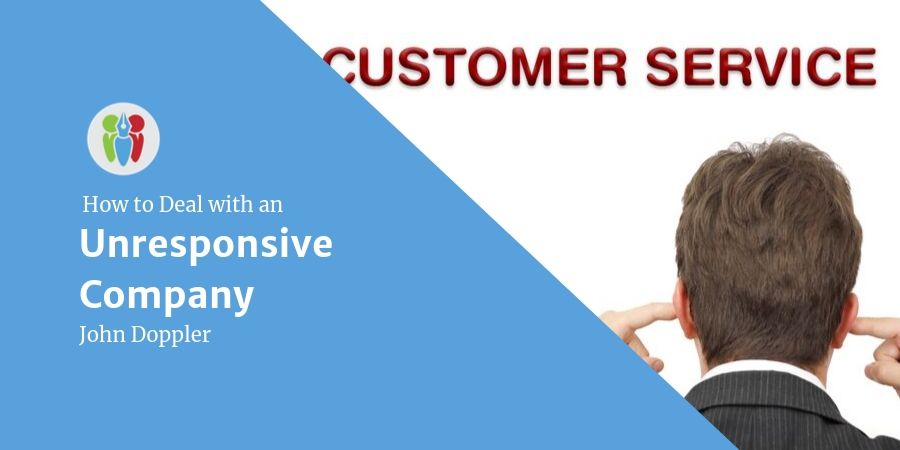 How to Deal with an Unresponsive Publishing or Self-Publishing Company

Most publishers — even the bad ones — will at least respond to client requests and complaints. But what happens when that company simply ignores you? Below are some tips on how to deal with an unresponsive publishing or self-publishing company

The silent treatment from unresponsive publishing or self-publishing company?

That's the situation that authors with Dog Ear Publishing recently found themselves in. After months without statements or royalties, authors sent increasingly worried inquiries. These were met with vague excuses at first, and eventually no response at all.

This can be a nightmare scenario for any author.

When the publishing service does not respond to correspondence, the author's book may be held hostage. Retailers often won't take the book down without a statement of reversion of rights from the publisher. And retailers will not put themselves in the middle of a legal dispute between the publisher and the client, so a court order may be the only way to compel the publisher to remove the book from sale and allow the author to republish.

Legal action can be prohibitively expensive, time-consuming, and difficult if the company is headquartered overseas. But if you find yourself in this situation, there are steps you can take without resorting to the courts.

As soon as you realize that a company has defaulted on their obligations, document your interactions with them, from the initial proposal up through your most recent communication. Document the date, who you spoke with, and what the result was.

Having a well-organized timeline is a tremendous help, especially if the company later disputes your version of events.

When you communicate, do it in writing or email. Unless recorded, spoken conversations are impossible to prove, and the company's representative may later forget, lie about, or distort what was said.

For critical communications like legal demands, send the message via email (for speed) and via post by certified mail with return receipt. Email is easily deleted and ignored, but a certified letter shows that you're serious. It gives you legal proof of receipt of your demands. And it's a clear signal that you are documenting the process, possibly for a lawsuit.

Carefully read through your contract or agreement with the publisher. You'll want to take note of four things: the company's obligations to you, the consequences for failing to meet those obligations, the terms under which the contract can be terminated, and the process for notifying the company.

You will need to carefully obey the deadlines and processes outlined in the contract. For example, the contract may state that the company must be notified in writing by mail, and that they have 30 days to remedy any breach. You can reference these clauses in your demand letters so the recipient knows that (a) you are aware of your rights, and (b) the clock is ticking.

While this legal document has little effect outside of a court of law, it can be powerful leverage if you do reestablish communication with the company. Nobody wants to deal with a lawsuit, especially when they're on the wrong side of a suit for breach of contract.

Be firm, but be polite

This is a stressful time, and that's exactly why you need to take special care to remain civil. Hostile language won't lead to a resolution, and if the dispute does go to court or arbitration, it can undermine your case. For example, the delinquent publisher can claim that they stopped communicating because the author was abusive and harassing.

Always keep your cool. No email needs to be sent immediately, so wait a few hours (or even days, if necessary) until you've regained the necessary calm to compose a firm, but polite demand.

When a company ignores correspondence, it's because the principals are hoping the problem — in this case, you! — will go away. Make it clear by your actions that you will not give up.

Contact the company via email, phone, post, and even by direct messaging on social media. When you do reach a person, insist on a solid deadline: “When will Mr. Smith call me back? Can I expect to hear from him by Monday? By Tuesday? If I haven't heard from him by then, I'll be in contact again.” Hold them to that deadline and follow through.

If normal channels of communication continue to prove ineffective, it's time to make some noise. Reach out to every contact within the company you can find and explain that you're not receiving a response from your appointed representative. These complaints will cause discomfort for the responsible party: subordinates will forward the message up the chain of command, and supervisors may instruct them to fix the problem immediately. Either way, it may kickstart a more earnest discussion from agents who have not shown an interest in resolving the problem.

Let them know you're serious

Consider hiring an attorney to draft and send a letter on your behalf. Attorney services of this sort can be purchased at a realtively low cost.

Legal letterhead has a way of making negligent companies sit up and take notice, particularly when combined with a clear understanding of your contract and a carefully documented timeline of how the company has failed to meet its obligations.

As a last resort, go public

When all other attempts have failed and the company has shown no intent to respond, it's time to bring out the heavy artillery. Remembering the “be polite” mantra, post a negative review or complaint on the Better Business Bureau website, on review sites like Yelp, and on the company's social media pages. Clearly outline the different ways you've tried to resolve the complaint, and the lack of response.

Monitor your posts for a response by the host, the company, or other authors who have had similar experiences.

If the company has a social media manager, they may ask you to message them with your email address or to contact the company's customer service channels. Do so, but don't allow this to derail your complaint. If you don't get a satisfactory reply within a few days, follow up again on that page with an updated complaint. And you may wish to point out that it's embarrassing to have to make these posts publicly, but if the company would simply respond to your communications, the matter could be quickly resolved in private.

Be aware that this is a power play that could potentially alienate the employees you've been working with. It should only be used to provoke a response from an unresponsive company. If the company has been dealing with you in good faith, give them ample time to make good on their promises before you air that dirty laundry in front of the neighbors.

If you have been the victim of fraud, report it

If you believe the company's failure qualifies as a crime, file a formal report with the appropriate government agencies. If enough of these reports are received, or the crime is serious enough, consumer protection agencies may initiate action against the company.

Some situations can't be resolved outside of the courtroom

There is a difference between a company that is reluctant or unable to communicate (e.g., because they are in the middle of declaring bankruptcy), one that fails to communicate due to negligence or incompetence (e.g., because the owner is overwhelmed and the company understaffed), and one that is actively attempting to evade their legal responsibility (e.g., a phony company that's committing deliberate fraud). The first two can almost always be persuaded to cooperate in time, but a company that is intentionally engaging in criminal activity may be a lost cause.

In these cases, there may be no other recourse but to file suit or abandon the case. However, exhaust every possible means of communication at your disposal before you throw in the towel. Y

If you follow these tips on how to deal with an unresponsive publishing or self-publishing company, you may be surprised and find the company suddenly agrees to negotiate.

Have you had to deal with an unresponsive company? Were you able to resolve it? Let us know how in the comments below.