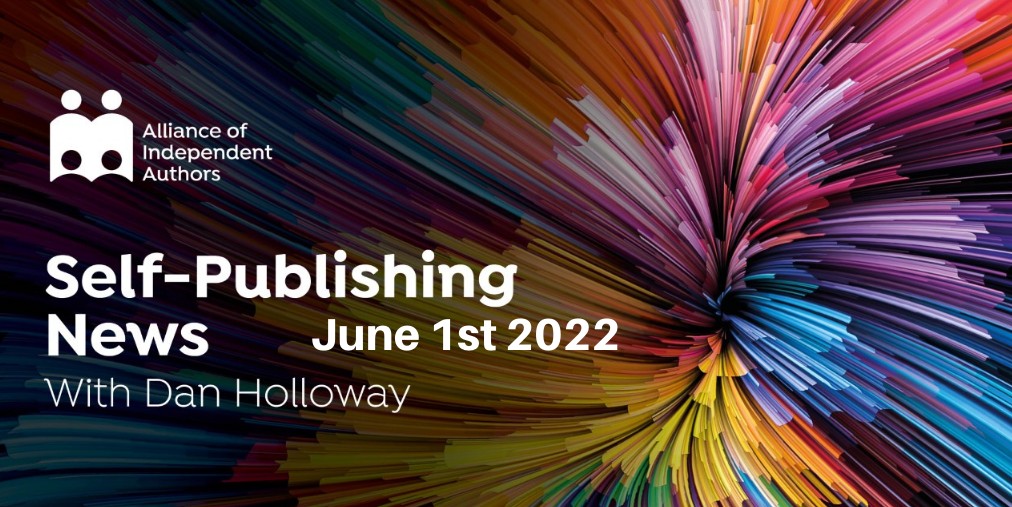 This week's #indieauthorchat is tonight, Wednesday 1 June, at 8pm UK time, 3pm Eastern Time. Tim will be looking at an issue that matters to all of us – how much authors really earn! Please do also catch up with the latest self-publishing news podcast, which you can listen to here. In it, Howard and I look in depth at the recent controversies around the role of librarians in curating content among many other things. I'd also like to use this space to extend very best wishes on behalf of all of ALLi to one of the heroes of the indie world, Mark Williams of the New Publishing Standard, who is currently recovering from malaria.

It's a week of better and worse news for the “wide” community this week. First up the “better” from Rakuten Kobo. The company’s CEO Michael Tamblyn gave the keynote at the Abu Dhabi International Book Fair. The talk covered a lot of fascinating ground. The key action to takeaway is that by the end of the year, Rakuten Kobo will make Arabic a primary browsing language. This will mean authors can reach more audiences than ever.

But it was fascinating that he positioned this within the overall “going wide” principle. Not only did he impress upon the audience the importance of an ecosystem in which self-publishing was as freely and easily available as possible in as many formats as possible. He also questioned the acceptance of exclusivity models in digital publishing. In particular he pointed out that when it comes to print, it would be unusual for publishers to restrict sales of their books to one retailer. Yet when it comes to digital, we seem to accept that we have to think about whether or not we have to be exclusive in where we sell.

Thanks to ALLi member Karl Drinkwater for bringing this story to my attention. Books2Read is a fabulously useful tool, especially for those of us who “go wide” with our book distribution. In short, it creates a nicely formatted, easy to embed, and easy to use widget for each of our books that includes links to all the stores where the book is available. You can link to local markets, and it works for print and audio as well as ebooks. All of which makes it fantastically useful.

Books2Read is provided and supported by Draft2Digital (they use the same typography for the “2” in a nice bit of branding). Draft2Digital is also a fabulous platform, whose wide reach and easy to use interface make it an essential part of many indies’ toolkits. They are fantastically busy right now as they manage their recent acquisition of Smashwords.

Some members of the community have reported bugs on Books2Read going  unfixed and expressed concerns that the tool is no longer being updated. Mark Leslie Lefebvre, who heads up  business development, says that, on the contrary, “there are plenty of updates happening to Books2Read, not to mention a list of 100+ improvements slowly being worked on (with bugs as the number one priority).”

I reported recently on Amazon's decision to close both its bricks and mortar bookstores and its “4 star” shops. But the digital retailer still seems intent on playing the bricks and mortar retail game. Its latest toe in the water is fashion. Amazon Style opened in Los Angeles last week. And there is a lot of the technology you would expect. Amazon will suggest outfits based on what it knows about you and move you around the store accordingly. Interestingly, one of the driving factors in the new store is a more efficient use of shelf space.

Which links to another interesting story I came across. It seems that Amazon has a warehousing problem. Specifically, it has too much warehouse space. And too much of it is empty. Meanwhile sellers in the fulfilled by Amazon programme are having to pay increased charges to cover Amazon's overhead on those empty shelves. These stories feel as though they are two sides of what Amazon might be realizing is the same coin.

In the indie community, we talk about awards a lot. At ALLi, we are proud to have Book Award Pro as a partner member, offering a great service to indie authors to help us navigate through the labyrinth and find the prizes that work for us. But that doesn’t change a very glaring anomaly. For many of the leading awards in the industry, we are still not welcome.

I reported recently from one of the big annual gatherings of book awards, the Audies, where the 25 category winners contained just one indie title, Heroine by Mary Jane Wells. This last week saw another of the industry’s big award gatherings, the British Book Awards, affectionately known as the Nibbies. This time there was not a single self-published winner. It’s a reminder that there is still a long way to go for the industry. And a reminder that it is not necessarily that our books are not good enough. It’s rather that for some unfathomable reason they are not eligible enough.