The Secret Diary of a Recovering Plotter

There are a handful of fundamental debates that cycle through the writing community: indie vs trad, wide vs exclusive and plotter vs pantser. Some of these debates have obvious answers, others less so. Where writers may flip between indie and trad or wide and exclusive, depending on where their business model sits, there's  less movement in our methods of creating the stories themselves. Writers tend to fall somewhere on the spectrum of plotter or pantser and sit there. But ALLi blog manager Sacha Black tells a different story.

What's the difference between Plotting and Pantsing? 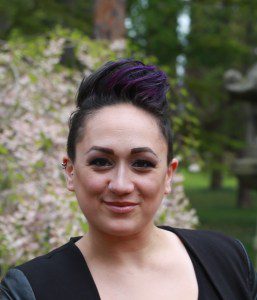 I like to think of plotting and pantsing as a continuum. On the one end, you have plotting: a structured and planned approach to writing. Typically a plotter will know as much as possible about their story before they begin. Before a plotter starts writing, they might have written:

A pantser takes a more fluid approach. They might not know anything before they start writing. Just the fragment of the idea that sparked the story. Of course there are many writers who mix the two and sprinkle a little of each method into their process. And in reality, whichever method you prefer doesn't really matter. What matters is finding a method that works for you and helps your creative mind spill words onto the page.

My journey as a recovering plotter addict

When I first started writing, I was a hardened plotter. I made the rookie mistake of ‘assuming' I needed to know everything about my story before I could start writing. Something that led me to not write for over a year because I was too busy killing trees and creating reams of notes. Thankfully, I bumped into the National Novel Writing Month challenge and promptly wrote 57k in a month. Ironically, I didn't refer to my notes once during that month of writing. Which left me wondering: had I wasted the last year plotting? 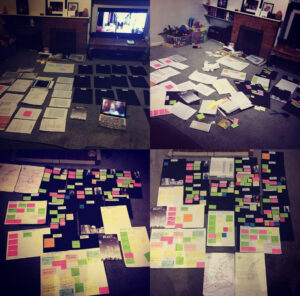 Please note, several packets of post-its died in the making of this photo

That very logical question didn't stop me continuing to plot – apparently I'm a stubborn old mule. So stubborn, in fact, my writing friends used to say my home was the place where post-its came to die!

But each time I plotted a manuscript, I'd get a few chapters in and realize the story was veering off into the wilds of my imagination, the characters weren't toeing the line and I didn't have a clue what was going to happen anyway.

Then I read Writing into the Dark by Dean Wesley Smith and my eyes were opened. A couple of things really stood out to me, the first was that not having an outline gave you more creative freedom to change things. Now, of course, as a plotter you're still free to change anything you've planned. But something struck home about the efficiency of that. It's more efficient not to plan if I'm going to change the story anyway. Why waste my time?

The second concept was the one that tipped me over the edge. If you don't know where your story is going, the reader won't be able to guess either. *queue a magnificently cliched cackle* That's the kind of book-mojo every author dreams of. I was sold.

I then spoke to Dean as part of the ALLi's #SelfPubCon, aka the Self-Publishing Advice Conference (and if you haven't registered for the Fall conference, you really should).

You can register here.

His session solidified my move towards pantsing – something Dean refers to as ‘writing into the dark'. If you missed his conference session, I highly recommend catching up with it right here.

If you're like me and you've either changed (or are) changing it currently, here's some top tips to help you:

Plotting vs Pantsing - what happens when you change your writing method? #amwiting #WIP #writingcommunity #IARTG #ASMRG Click To Tweet

Have you changed your process as you've progressed through your writing journey? Who out there is a plotter and who's a pantser?