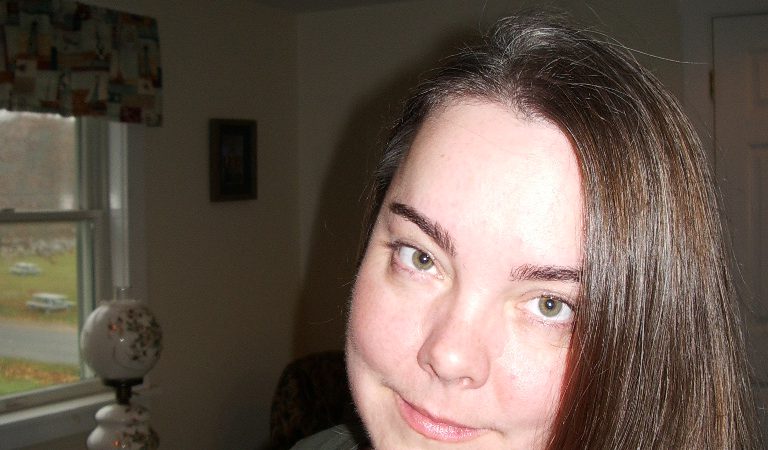 Indie author Christine Frost shares her disappointment on a major book festival's attitude to self-published writers and makes some constructive suggestions for change. 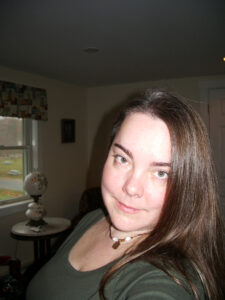 Last year as I perused the exhibitor booths at the Boston Book Festival (BBF) in Copley Square, the idea came to me to look into setting up my own display. Alas, checking the organization’s site revealed self-published authors were not welcome. I had been hoping to talk with someone at the BBF about the opportunity, but they soon recognized the popularity of indie publishing and opened up to indie authors for the first time this year.

So when Boston Magazine reported that this year’s event would offer space to indie authors, I was looking forward to seeing how they would be integrated into the festival, which draws more than 25,000 people to Copley Square. With ALLi’s Open Up To Indies campaign in mind, I was pleased.

Unfortunately, it did not go well. The printed program offered little enlightenment about Indie Alley or its precise location. The venue map showcased traditional publishers and literary organizations in their usual spots. Rather than include Indie Alley in the exhibitor list, it appeared as a pale orange ad toward the back of the program. No signs directed attendees to it. I traversed the perimeter of the festival, eager to see fellow indie authors, and eventually gave up in favour of not missing out on the dozens of readings and panel sessions to choose from.

Days later, some of the authors who found themselves in this out-of-the-way area shared a letter on Facebook that had been sent to the event organizers to express their frustration. The authors of Indie Alley each paid $150 for a table, plus the cost of their displays, only to be found when passersby were lost around the John Hancock Tower. 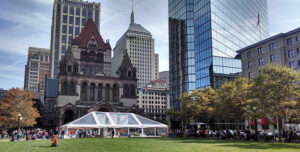 When I contacted organizers of the Boston Book Festival, they mentioned that Boston Magazine incorrectly reported the indie authors went through a “rigorous application process” in which 30 were selected; slots were actually given on a first-come, first-served basis. They said there was no other location to place the authors. The original plan was to have poetry readings throughout the day in the John Hancock Tower’s Blue Glass Café, and people would pass through Indie Alley to get there. In the weeks leading up to the event, managers at the tower notified the BFF that the space wouldn’t be available anymore. Authors from Indie Alley argued that there was plenty of space in front of Trinity Church, which would have placed them along the perimeter enjoyed by the other exhibitors.

The Boston Book Festival is comprised of two full-time and one-part-time staff, and relies on a small army of volunteers. I was told the amount of extra effort to coordinate Indie Alley proved to be too much in the face of the increased phone calls and emails in addition to the unhappiness that was felt on all sides of it. Ultimately, I was told, they can’t be all things to all people, and independent authors should organize their own event. 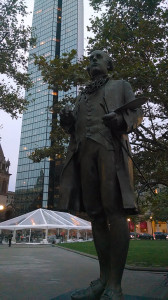 I was disappointed that it was deemed such a failure. Lessons were certainly to be had on both sides. Better strategy would have made Indie Alley more visible. The follow-up conversation might have been more constructive, with indies offering more collaborative solutions to perhaps help organize their own space at the event in the future.

While BBF organizers solidly shut down the idea of trying to incorporate self-published authors again after this experience, I’m hoping that eventually there can be a chance to revisit this to make it a more positive experience for everyone. With ever more authors turning to self-publishing, there is a host of opportunities to showcase the wealth of talent, innovation, and experience indie authors offer, through exhibits and panel discussions, and there would be plenty of interest among the attendees of this great Boston tradition.

Christine Frost received master’s degree in literature and creative writing from Harvard Extension School. Having worked as a beer and mead brewer and an international sales assistant for a record label, she eventually found her career in the world of words, becoming a communications manager, writer of historical fiction, and teaching assistant for college-level literature courses. She’s happily ensconced in a place overcrowded with books in the Boston area with her husband. Her blog is www.herravendomain.com.