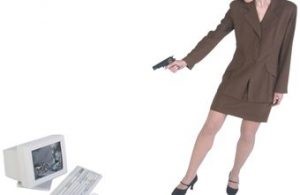 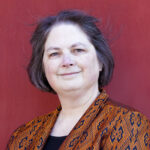 US indie author Karen Myers speaks out against the common practice for self-published authors to ask their readers to post reviews of their books on Amazon, Goodreads, and bookblogs. Do you share her view or disagree? Read her rationale then join the debate via the comments box… 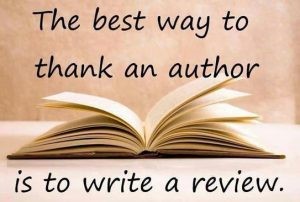 See that illustration? You know what’s wrong with it?

Readers don’t owe anything to authors, including thanks, and we shouldn’t presume that they do if we want them to continue as customers.

At least, that’s what I think. And here’s why.

Authors often seek recommendations on what to include in the back matter of their books. The potential list is long:

One of these, the “ask for review,” was recently in the news as something that traditional publishers have begun including in the back matter of their books, apparently learning from independent authors.

When I first published my books in 2012 and for a a couple of years thereafter, I also asked for reviews in the back matter, just as a standard practice, but I’ve stopped doing it.

Why would I do that? Don’t I want them to leave book reviews?

Of course, I would like to have more reviews — who wouldn’t? But what I would like, even more, is for someone who has just finished a book to be eager to look at and buy my other books. That “bird in the hand” of a satisfied reader is far more important to me than another drop in the review bucket for a potential reader down the line. My customer is a customer first, way ahead of being a member of my marketing team.

I think asking for the review smacks of desperation and comes across as a bit unprofessional. I don’t want my reader to start thinking of me that way.

The Impact on my Reviews

And you know what? It doesn’t make any difference to the number of reviews I get, near as I can tell. The review rate seems to be about 1-3% of units sold (I don’t do freebies), and that seems to be good across most current and active authors, trad or indie.

Think about what that means…

That means that 97-99% of my readers didn’t leave a review. And every one of them probably felt a bit uncomfortable about it, if they read the request. Did that make them less likely to buy another book? Who knows?

If the person is accustomed to writing reviews, then they’ll write one or not, regardless of what I say, just as if it were any other author’s book.

But if they’re not so accustomed, we’re asking them to change their behavior to accommodate us. We’re asking for a favor.

But that’s not the transaction deal our readers make — the deal was, they give us money, and we give them entertainment.

Not everyone wants to learn a new behavior

It’s as though we only published ebooks and asked people who only read print to learn how to use a new format just so they can access our books. That’s asking them to change behavior, too.

Unless we are in the “super-cool, new trend” category and we’ve encountered a techie (and even then), asking people to change their behavior to do us a favor isn’t really going to work. And it may embarrass or guilt the recipient, which is not how we want them to think about us.

Better to just thank them, give them the “for more information” and newsletter signup links, and send them on to the “1st chapter of next book” with its link so they can buy the next one while they still like us.

That’s more important than a book review any day.

OVER TO YOU Do you agree with Karen's approach? Have you changed your process regarding reviews lately? Do you have a different way of acquiring reviews? Join our conversation!

ANOTHER GREAT POST ABOUT BOOK REVIEWS – and this one will make you smile!

Indie Authors: A Book Review That Shows Why We Shouldn't Take Book Reviews Too Seriously