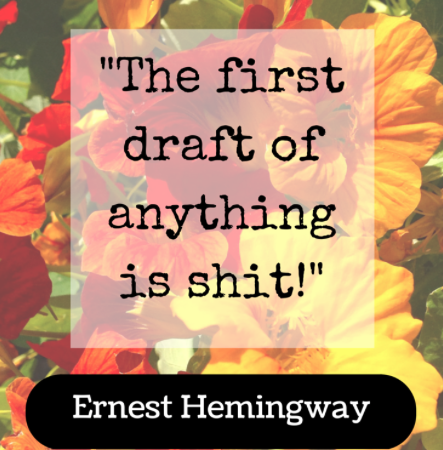 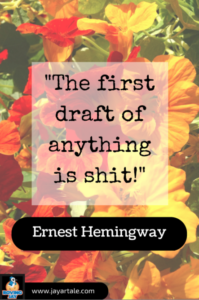 (With thanks to Jay Artale for sugaring the pill of Hemingway's terse words with a beautiful graphic!)

For this Writers' Wednesday, we have a second helping of ALLi members' favourite wise words about writing to inspire indie authors to aim high and achieve their self-publishing goals.

“The first draft of anything is shit!” –  Ernest Hemingway

“This quote reminds me not to expect perfection out of the gate,” says Jay Artale.

“Before you can make a silk purse from a sow's ear, first you need a sow's ear.” – David Michael Kaplan

Keith Dixon's favourite piece of advice on craftsmanship. It's from Sol Stein, and it's about getting the sequence right in your prose. So for example, instead of writing, “He looked for the picture, having entered the room quickly, and found it behind the desk,” you would write “He entered the room quickly, looked for the picture and found it behind the desk.” So the prose follows the sequence of actions. “It might seem a minor point, but it gives prose a directness and rapidity and easy-to-followness,” advises Keith, “even when you can't think of the right word to end a sentence.

Robert T Balder says: “My favorite author, the late Roger Zelazny, told me in person the one time I got to meet him, “tell a good story, and all is forgiven”.

One of many memorable quotes that Cindy Rinaman Marsh gleaned from reading The Habit of Being is:

“The meaning of a story should go on expanding for the reader the more he thinks about it, but meaning cannot be captured in an interpretation.” – Flannery O'Connor

Shweta Aggarwal has two favourite sayings on motivation and inspiration:

“Dream small. Dream big. But no matter what you do, don't put a dream to sleep.”

“Don't just think outside the box. Think as though there IS no box!”

Last word to Dan Holloway, who says “the following quote isn't strictly about writing, but given that writers should first be readers, it is actually about writing”:

OVER TO YOU What are you favourite aphorisms about writing? Feel free to share them in the comments box!

If you found this collection inspiring, check out these similar posts: