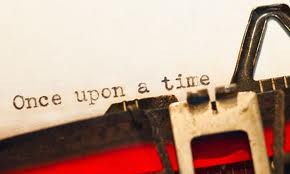 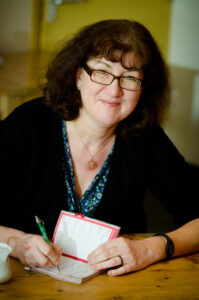 ALLi Author Advice Centre Editor Debbie Young, pen poised to fill that blank page inspired by all the great advice in this post…

Do you have a favourite saying or quote that drives your writing? I asked that question of ALLi  members on our Facebook discussion forum (a members'-only benefit) and was overwhelmed by the smart, succinct responses.

Some shared famous authors' aphorisms, others lines that they had arrived at by themselves. Here they are, and I hope they inspire you too. You might even want to use your favourite as a screensaver, or pin a note of it above your writing desk.

My favourite, by the way, is “Murder your darlings”, attributed to Sir Arthur Quiller-Couch – and I love it so much, I'm using it as the title for the second in my new cosy mystery series!

But the one that lives on my desk, printed on a mousemat, is “A journey of a thousand miles must begin with a single step (Lao Tzu, ancient Chinese philosopher”. When I'm procastinating from my writing, a glance at that, substituting “story”  for “journey”, “words” for “miles” and “sentence” for step, and I'm away…

“A ratio of failures is built into the process of writing. The wastebasket has evolved for a reason.” – Margaret Atwood

“This one has been a comfort over the years,” says Linda Gillard.

“When eating an elephant, take one bite at a time'. – Creighton Abrams

“Applicable to anything in life, as well as writing,” says Mark Gillespie. “For those who are intimidated by the idea of writing a novel and don't know how or where to start, this is gold.)

“Writing only happens after a liberal slathering of butt glue'.

“Not sure where I heard it, but I try and remember it every time I think about checking Facebook,” says Charles Booth. “As an aside, if you Google butt glue, you will find that it is a real product, used by Miss America contestants to secure their swimsuit to their behinds. Sheesh.”) Helen Kara quotes Terry Pratchett on the Anglicised version, which is, of course, bum glue, which summons up a different image in the US!

“You do stuff, and then it's done,” says Lisa Margreet Payne.

I have another variant: “The best way to get something done is to do it,” while Carol Cooper cites Nike's pithier version: “Just do it!” This handy reminder from Michael MacMahon makes it easier to reach the stage of declaring something is done:

“Finished is better than perfect.”

The road to Hell is paved with adverbs” – Stephen King

More smart advice from the King of writers chosen by Linda Gillard.

“I think to a poet, the human community is like the community of birds, to a bird, singing to each other. Love is one of the reasons we are singing to one another, love of language, love of sound, love of singing itself, and love of the other birds.” – Sharon Olds

“There is nothing to writing. All you do is sit down at a typewriter and bleed.”

“Reminds me to let the words and emotions flow on the first draft and get the heart of the story out,” says Amira Makansi. “Then edit and make it sound pretty later.” Various versions of this notion abound, and Amira cites Ernest Hemingway, but Orna Ross adds “It was sports writer Red Smith who said, “There’s nothing to writing. All you do is sit down at a typewriter and just open a vein.” I know this because Writers' Digest have a book with title based on that quote, called “Just Open a Vein”. But Hemingway gets another shout-out from Ellie Holmes here: