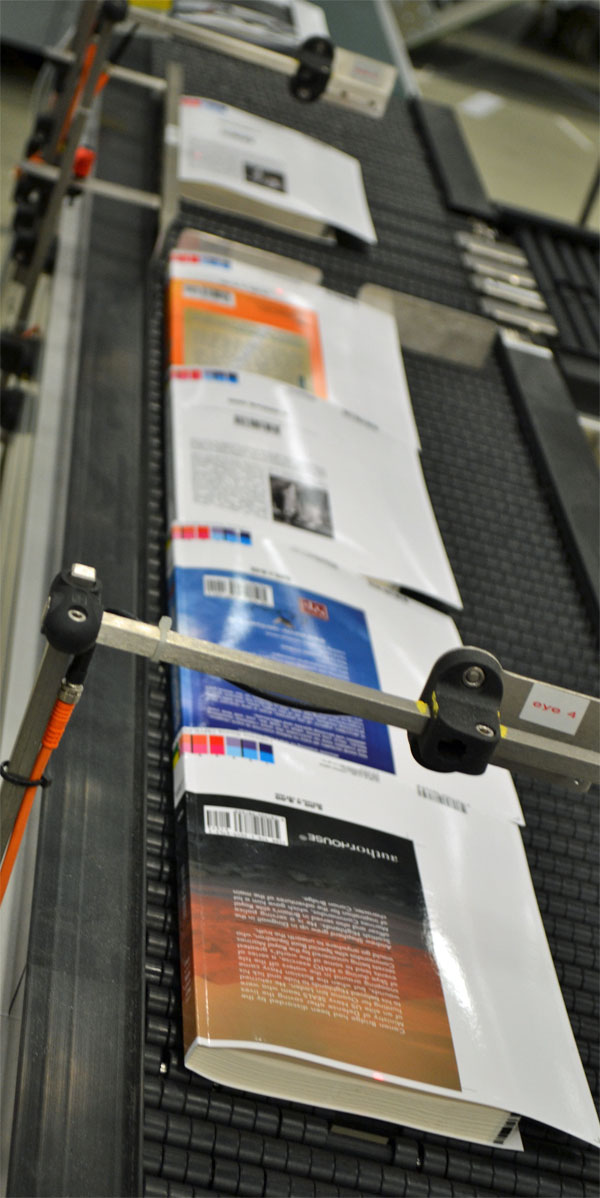 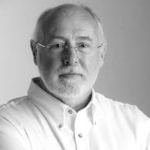 British indie author David Penny shares his experience of a tour of the UK printing facility of Ingram Spark, the global distributor of books favoured by many self-published authors for both print-on-demand books and ebooks.)

On Friday 25th September 2015 I attended an event at the Ingram printing facility in Milton Keynes, together with other ALLi members and representatives from traditional publishers. Why Milton Keynes? Andy Bromley, of Ingram, told us that when the company first set up in the UK the majority of work came either from Oxford or Cambridge University Presses, and Milton Keynes was more or less between the two.

Andy started by giving an overview of the Lightning Source and Ingram Spark services, which are essentially the same, although LS offers more print size options, and IS makes it easier for Indies to start up. The talk was informative and interesting and I may well write a post about its content in the future, but for now I want to describe the process that goes into creating a book—your book, if you’ve ever used Ingram’s service. And it’s the same if you want a single book or a hundred!

Ingram were open about the fact if you want your book as cheap as possible, or want the best possible quality, you might be better off looking to a traditional print service. But bear in mind this is only cost effective if you want several hundred books at a time and are willing to store them. For the rest of us mere mortals Ingram is a no brainer choice.

We started on the production line floor, which was surprisingly low on staff. Our guide, Terry, told us the entire facility operates with less than 20 floor staff. Despite this some of the processes were surprisingly labour intensive. More on this in a moment. 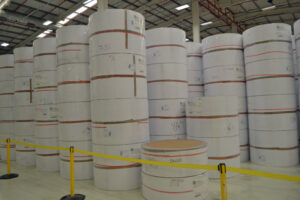 Paper bales – the raw product for your book

The first thing you see is the paper. And what a lot of it there is! Great round bales of it towering toward the ceiling. This is the raw material that ends up as your book. 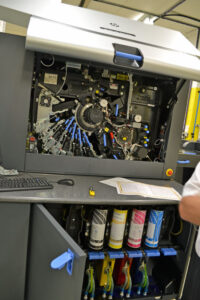 There are two separate lines of print machinery. The one rank is used by most IS authors and is similar to a laser printer, and gives that slightly raised, slightly glossy text you may be familiar with. Good quality, more than good enough, and at present this is the only option if you opt for creme paper.
The other production line uses the same technology as ink jet – but here each single ink cartridge costs several hundred pounds! At present the black print from parts of this line is not as dense as the laser equivalent, but Terry told us this was changing, with half the machines already upgraded and the remainder coming online in January next year. These upgraded machines us a really black black. Terry showed us samples of this live, and they are truly exceptional.

All production lines start with a raw roll of paper which is pre-shaken to stretch it a little from where it has been tightly rolled on the bale. This feeds in to where print is applied. 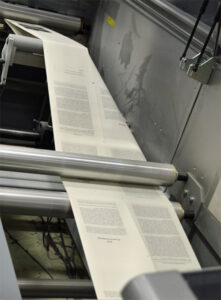 A run of books being printed, just as the folding into a finished product is starting

Not, as you might expect, one side then another, like a duplex printer, but up to three or four pages on each side, all printed directly onto a single roll. This is then fed into the folding and cutting section. Out the other end comes a finished book. Just thinking how this actually worked made my head ache!

If you put in a request for one of your books it gets batched up with all the others for that day of the same size. When we watched the machines were printing a 5” x 8” run. Some were single books, other longer runs.

These come off and are then manually moved to the next phase, where the pages are bound together. From there they go to where the cover is added – again a semi-manual operation. 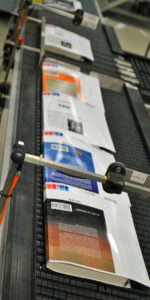 Covers are pre-printed then fed to the correct book, stuck on and laminated either in gloss or matt. At this stage the book looks odd because it still has all the guides and print information on it, which is then trimmed off, with all waste being recycled.

The finished books are passed to despatch, where one or more individuals use the bar code on the back of the book to match up on that day's production and put them in a slot either for single book or a bulk run.

Single books go to one section where they are packaged up, bulk orders go elsewhere to be boxed.

Terry also showed us the hardback printing facilities, and talked a little about the advances in pod printing that have taken place over the years. Personally, I loved it all. Having worked many years ago in a traditional printing factory, where my job was to melt down old lead type after it came off the printing press, this showed me how much things have changed since!

Some interesting facts that came out of the day:

This was a far more entertaining and informative day than I had expected, and I had already expected it to be good. Ingram came across as professional, businesslike, but also very approachable. They were interested in even the smallest issues raised by our group, determined to make sure they met our needs as well as they possibly could whether we were a single Indie author or a publishing house.

I want to thank Andy Bromley for the invitation, and all Ingram staff throughout the day for a wonderful experience.

To find out more about Ingram Spark's services for self-published and indie authors, visit their website: www.ingramspark.com. ALLi members are entitled to a discount on Ingram Services. Visit the Discounts and Deals page in the Member Zone.