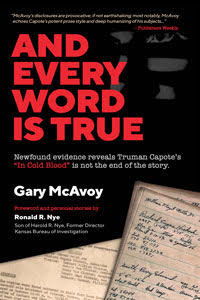 Why I Write What I Write, Prompted by Rare Literary Papers 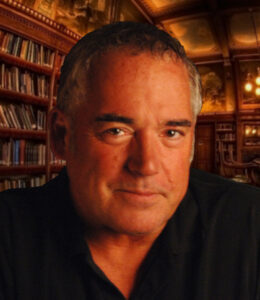 Gary McAvoy describes how in his quest to write a non-fiction book positing an alternative theory about the mass murder featured in Truman Capote's In Cold Blood, inspired and informed by his interest in historic literary papers, he had to spend four years fighting a law suit to defend his right to self-publish a work that no trade publisher would touch for fear of tarnishing Capote's reputation.

The lessons he learned are relevant to all non-fiction authors who draw on real life material.

While writing has been in my blood since my early teens, another hat I wear is as a collector and dealer of rare historical letters and literary manuscripts. Those who share this passion know few things compare to holding history in one’s hands—a letter penned by F Scott Fitzgerald to his editor, Maxwell Perkins, discussing royalties for The Great Gatsby, for example, or one by Truman Capote lamenting delays on his book In Cold Blood due to the killers’ legal appeals.

Inspired by the In Cold Blood Papers

It was this last acquisition that sparked the intriguing discoveries that inspired my own new book, And Every Word Is True, a revealing look at startling disclosures about the investigation surrounding the infamous 1959 Clutter family murders, heinous crimes chillingly portrayed in Capote's bestselling book.

In 2012 I was approached by the son of Harold Nye, a former director of the Kansas Bureau of Investigation, to handle a special auction of his father’s books and letters. Capote had sent these now-historical artifacts to Nye while both were working on the subject matter at hand. Nye was leading the field investigation of the murders of a Kansas farmer and his family, and Capote was writing In Cold Blood, the book about the crimes that would make him the most famous writer in America.

As an ardent collector of distinctive literary memorabilia since the 1980s, I felt privileged to be handling the sale of the rarest kinds of books and letters by Truman Capote, presentation copies personally given by the author to one of the principal investigators during the time history was being made.

Obstructed by the State of Kansas

But when word of the auction hit the media, the State of Kansas (for reasons that are still unclear) stepped in to put a stop to that with a “cease and desist” letter. Well, I figured, so much for writing that book.

Then came the lawsuit, which claimed that information found in the Nye archives could cause all manner of grief:

This was in spite of the fact that the Kansas Bureau of Investigation headquarters proudly boasts an elaborate glass-encased display featuring the actual instruments of murder, with a copy of In Cold Blood mounted prominently above the knife and shotgun that ended four innocent lives.

Ultimately, the District Court of Kansas handed Ron and me the victory we fought four hard years to achieve, while affirming our First Amendment right to publish Harold Nye’s personal journals and records.

What I Learned from the Experience 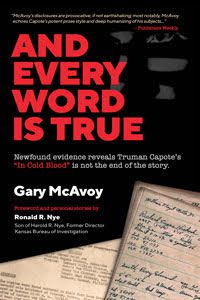 Gary McAvoy persevered for four years to self-publish his provocative book, out 4 March 2019

As a writer, this experience was a stark lesson on many fronts, first and foremost:

1) Don’t be cowed into backing down from a principled position, especially against a powerful and well-funded opponent.

As my agent was pitching the book to publishers, I was to find, somewhat shockingly, the book was rejected more than once on grounds that “We don’t want to be the publisher that takes down an American classic“.

3) The importance of resolving acceptable use of the plethora of documents at my disposal.

This was the very basis for our lawsuit with Kansas, in fact.

Having gone through such grueling and often intimidating litigation for so many years, you really can’t blame me for being gun shy, so to speak, when it came to naming names in my book. But when writing about historical events, real people and the circumstances related to them are essential components. Determining how these can be properly used required endless rounds of permission-seeking, copyright and trademark searches, and thoughtful consultations with my lawyers.

Richard Hickock, one of the executed Clutter killers, sent hundreds of pages of handwritten letters to another of the principals in my book. Normally there are specific legal protections on such documents, given a variety of factors, but working with the Authors Guild (membership in which I strongly recommend), their legal support services for members determined Hickock’s letters to be acceptable for my use, since copyright protection had never been sought and they preceded a specific legalistic time frame.

4) The importance of attention to detail

Deeper knowledge of these kinds of pedantic details can be crucial for anyone writing nonfiction, especially when, as in my situation, you’re writing about alternative motives and theories that may or may not be provable, using names of real people living or dead.

Exercise caution, then, and, while you’re at it, look into media liability insurance as a prudent back-up in case someone out there takes exception to your work.

OVER TO YOU If you've had to do battle to tell a true story in your self-published book, we'd love to hear about it – feel free to join the conversation via the comments box.

Gary McAvoy (www.garymcavoy.com) is a veteran technology executive, entrepreneur, and lifelong writer. For several years he was also a literary media escort in Seattle, during which time he worked with hundreds of authors promoting their books—most notably Dr. Jane Goodall, with whom Gary later collaborated on “Harvest for Hope: A Guide to Mindful Eating” (Hachette, 2005).

Gary is also a professional collector of rare literary manuscripts and historical letters and books, a passion that sparked the intriguing discoveries leading up to his latest book, “And Every Word Is True” (Literati Editions, March 2019), a revealing look at startling new disclosures about the investigation surrounding the 1959 Clutter family murders, heinous crimes chillingly portrayed in Truman Capote's “In Cold Blood.” “And Every Word Is True” pulls back the curtain for a suspenseful encore to Capote’s classic tale, adding new perspectives to an iconic American crime.