Production: A Small but Important Tip about Formatting Spacing after Periods (Full Stops) 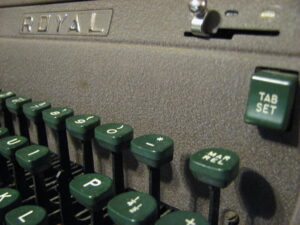 If you want to make your self-published books as professional as possible, it's important to pay attention to formatting details such as margins and spacing. Today we're looking at an issue too easily overlooked and often misunderstood, perhaps because it's invisible: the blank space after a period.

Just how big should that space be? One space, two spaces, more?

This was the question posed by one of our authors on our members-only forum recently. Other questions swiftly followed:

Here's the gist of the ensuing conversation…

One Space Versus Two Spaces

When we learn to touch type, it's drummed into us how many spacebar spaces to insert after a period (full stop).

(By the way, if you haven't yet learned how to touch type – it's never too late to learn, and it can vastly improve your writing productivity. More on that score here.)

The arrival of digital typesetting changed the way characters are arranged on the line:

If you want to remind yourself what a difference that makes, try formatting a piece of text with the Courier font, which emulates an old-fashioned typewriter. (Remember, typewriters offered only a single font and type size.)

So if we're used to typing two spaces, should we reprogramme ourselves to one? Does it really matter?

Two spaces afer a period look like this.  As opposed to one after this sentence. Not a big difference to the untrained eye, but enough to irritate a purist.

However many spaces you choose to use – and yes, it is your prerogative as an indie if you don't want to comply with convention – we recommend that, just as with spelling and punctuation, you make sure you are consistent,  to provide a  satisfactory experience for your readers.

Even if you think you have been consistent, it's easy for extra spaces to creep in during the editing process by mistake, so here's how to check.

View your manuscript such that all your formatting marks are shown on the screen. In Word, this means clicking the back-to-front P sign in the top toolbar:

Your spacebar spaces will show as dots. The easiest way to check for excess ones is then to type in ”  ” (ie spacebar spacebar) into the search box, to highlight each incidence. Then simply delete the surplus spaces/dots.

You might also want to try “(spacebar spacebar spacebar)” or even more multiples to be on the safe side. (Yes, you can do it in a single stroke with a global search and replace action, but it's best to avoid that function as it too often leads to unintended consequences!)

While you're unlikely to get a negative review for an otherwise fabulous read because you've used two or more spaces after each period, it's attention to detail like this that separates the professionals from the amateurs.

OTHER USEFUL POSTS ABOUT FORMATTING – from the ALLi Archive