You finally hit publish and have your masterpiece in both physical and digital hands. And then someone pirates your book. Book piracy feels horrible and scary and hopeless. So what can you do about it and what is the impact? We often talk about digital piracy, but not so often print book piracy. Today, the Alliance of Independent Authors welcomes and thanks member Rob Biesenbach for today's article all about what to do when your book gets pirated.

If you're looking for more information on piracy and copyright, we have the following articles to help:

Rob Biesenbach specializes in helping busy professionals capitalize on storytelling to connect with, engage and influence colleagues, customers and other important audiences. He’s the author of the Amazon bestseller Unleash the Power of Storytelling: Win Hearts, Change Minds, Get Results and two other books on business communication. He’s also an award-winning corporate communication consultant, an in-demand keynote speaker and workshop leader, and a Second City–trained actor. Find out more about Rob on his website, or LinkedIn.

Indie authors beware: one downside of success is that it makes you a target for piracy. I speak from experience, having lost boatloads of sales to three fraudulent storefronts in 2021. Beyond the financial hit, the ordeal cost me countless hours of stress and lost sleep. And because I didn’t immediately recognize the issue for what it was, it went on longer than necessary. If you ever find yourself in this position, here’s a bit of hard-won wisdom on how to recognize piracy, how to stop it and how to head it off before it happens.

It all started in May 2021 when I suddenly lost the all-important Amazon “buy box” for my latest paperback to a seller who was offering it at a lower price. When I reduced my price, they simply lowered theirs. I couldn’t imagine how they were able to make money that way, so I eventually ordered a “test copy” and discovered that it was printed by Ingram, where I listed my book at the 55% wholesale price.

I assumed that they were ordering my books at wholesale and selling them at retail. Not illegal, but definitely harmful to my interests, since my royalty on the discounted price at Ingram was much lower than on retail at Amazon.

So as a safeguard I temporarily removed the book from Ingram distribution and decided to wait until the reseller’s inventory ran out. I figured it wouldn’t take long based on my Ingram sales.

But they never did run out. In fact, throughout this two-month ordeal, the buy box switched back and forth between this seller and another. (The test copy from that seller also revealed it was printed by Ingram, leading me to suspect that the same person was behind both storefronts.) During this time I had countless email and phone conversations with Amazon KDP and Ingram trying to figure what was going on and what I could do.

I thought perhaps they pirated a copy of my book and were printing their own copies through Ingram, who assured me that their systems would detect and stop someone from printing my book on their own.

In June, I ordered an additional test copy from each seller and noticed the printing data on the back page was identical not just to each other, but to the copies I ordered four weeks earlier.

So four different books sold by two (purportedly) different sellers over a span of four weeks were printed on the exact same day and in the same location (March 5, 2021 in Pennsylvania)? Highly suspect, especially given the relatively low numbers I sold on Ingram around that date.

I looked at the books more closely and realized the covers were not the bright white of my originals, but a grayish white, the interior paper felt different as well, and the print quality on the author photo was poor.

Apparently the scammer behind both storefronts ordered a single copy of my book from Ingram and used it to print off their own copies for sale.

That’s when I went to Amazon and filed a copyright infringement report alleging that these storefronts were selling counterfeit copies of my book. That did the trick, and within a few days the storefronts disappeared and I won back the buy box. It was the end of a six-week ordeal.

(Or so I thought. Less than two months later another storefront, clearly operated by the same person, popped up selling the same pirated copies of the book. This time I leapt into action and shut it down within a week.)

How to Recognize Print Book Piracy

The piracy took a huge toll on sales (and my sales rank), which still have not fully recovered. Average monthly revenue has declined 30% even after reclaiming the buy box. So if you suddenly lose the buy box to another seller, here are some things to check:

You can also try contacting the seller directly. Don’t accuse them of anything — simply inquire about the source or quality of their inventory and see how they react. One of the sellers replied defensively, assuring me the books came “from Genuine source” [sic]. So that was revealing. 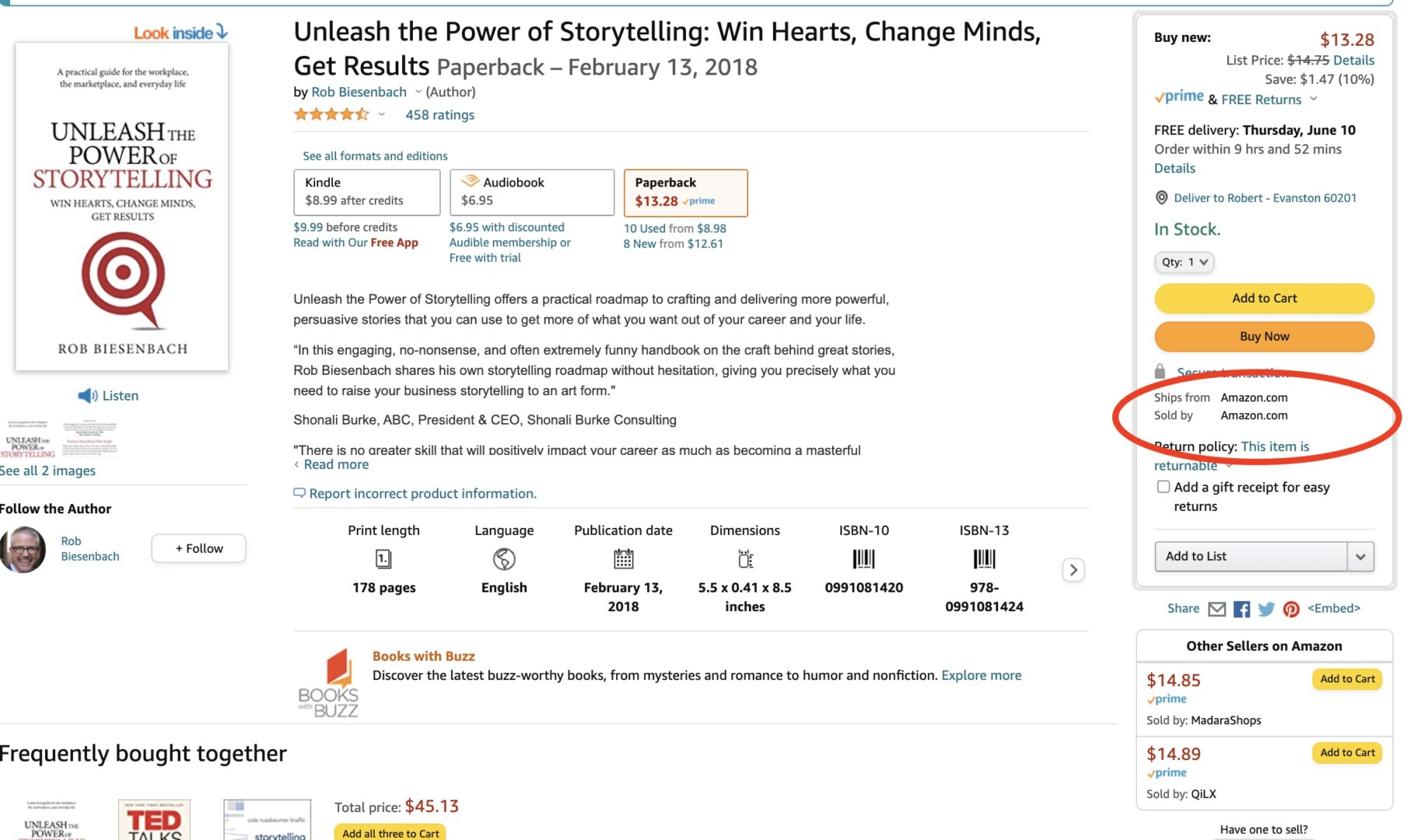 Throughout this ordeal, dealing with Amazon was a nightmare. I'd make some progress, have a case number, then in a subsequent inquiry they'd revert to cutting and pasting stock answers clearly based on keywords in my message and not an understanding of what I was communicating.

And I was bounced back and forth between KDP and the advertising people. One rep actually suggested I take my book down, change the title and cover, and put it back up again!

I was also prompted a few times to sign up for services like Amazon's Brand Registry or to register as an Amazon Seller ($39/month).

Ingram was generally more responsive and helpful, though I wish they had phone service like Amazon does. In the end, I lost thousands of dollars in royalties and a LOT of sleep. But I did learn a few things:

I will say Amazon is pretty good at timely takedowns — 4-5 days. But it's all handled by bots.

After the issue was resolved, I put my book back up on Ingram. But to be safe, I lowered the discount to 35% instead of 55%. Even though that wasn’t the basis of the counterfeiter’s scheme, I don’t want to leave any future avenues open.

Recently one of my test buys revealed another instance of the old counterfeit books being sold. But this time it was from a clearly legitimate storefront.

So instead of filing an infringement complaint I wrote to the seller informing them that they may not be aware that the copies of my book they were selling are counterfeit. They were very gracious, refunded my money and halted sales of the book.

So apparently the counterfeiter decided after their third attempt was stopped to simply dump my book into the resale market. I’m not overly concerned about that, since I still have the buy box on Amazon and no one has since undercut my price.

One final piece of advice: if you ever detect something odd going on with your book, listen to the little voice in your head. Sometimes the most obvious answer is the right one.

Over to you, have you ever had to deal with print book piracy?