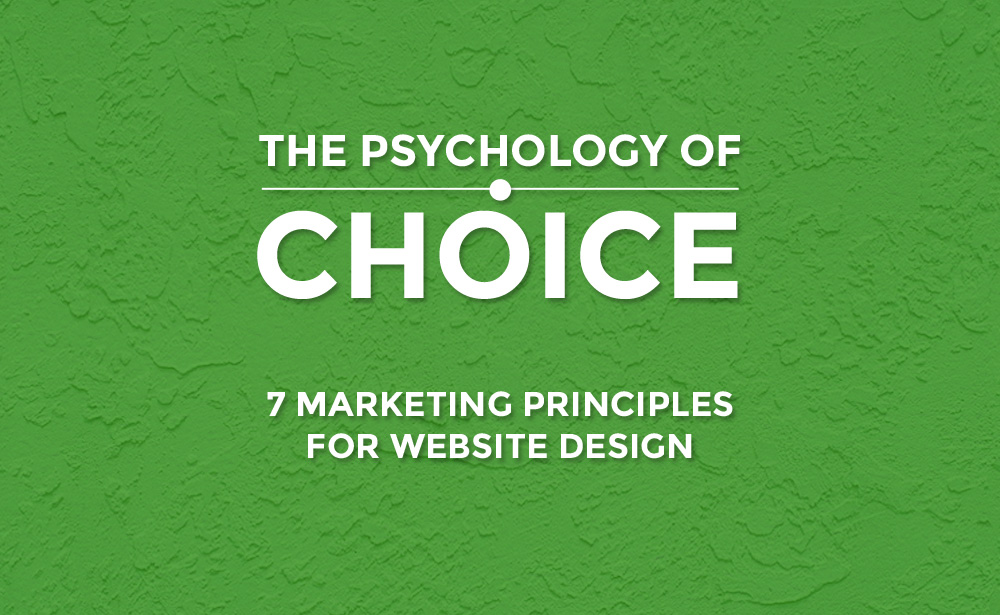 The Psychology of Choice

During the redesign of a friend's website, we pondered how to lay out the books on her sales page for maximum sales. She also wanted to offer a choice of novellas on the landing page for her mailing list, and we wondered what the optimum number of choices would be.

Fortunately, marketers and behavioral psychologists have been mulling over these concepts for decades, and we found a wealth of information to guide our website development. The following are the theories and studies we found helpful in guiding our decisions. I'll follow up later this year with the results of our efforts. In the meantime, I hope these studies provide inspiration for your website marketing efforts.

Too many choices leads to analysis paralysis

Researchers Sheena Iyengar and Mark Lepper found that the higher the number of options, the greater the likelihood that people will walk away without selecting any option.

Known as the “Jam Experiment,” Iyengar and Lepper's famous study described a display table offering 24 varieties of gourmet jam, and a second table offering only 6 varieties. The larger display attracted more shoppers, but the smaller display resulted in nearly ten times as many sales.

Psychologist Barry Schwarz calls this the paradox of choice. Offering too many choices can paralyze consumers. By simplifying that choice and reducing the number of decisions that must be made, we should be able to increase conversion rates.

Based on this, we scrapped a plan to list every book on a single page, and opted to display only three titles at a time.

A single option makes consumers more willing to walk away

Author Daniel Mochon found that narrowing a consumer's options to one choice may make them less likely to buy that option, a phenomenon he calls “single option aversion”.

The study found that consumers were more likely to make a selection when both models were presented to them.

This theory reinforced our desire to offer multiple options as an incentive for mailing list signups rather than a single novella.

Three is a magic number

If a single choice stifles conversions, and too many choices will overwhelm the consumer, how about two choices?

That's a possibility, but studies show that when given a choice between two options, consumers overwhelmingly select the cheaper option (or the greater perceived value). This may not always be the option we would like them to pick. Worse, if the items are equivalent, indecision can set in, and the potential customer may abandon the sale.

The Rule of Three is ingrained in the consumer's psyche. Small, medium, large. Basic, premium, deluxe. Hot, warm, cold. Bronze, silver, gold. It abounds in all fields, but especially in marketing, where a three-option layout leverages other psychological principles to drive conversions.

You'll see four, five, or more options in some cases, but three is the most common.

On the site we designed, three books are prominently laid out in the top third of the page. Other titles are available through a menu, and are grouped by categories, with the primary selections at the top of the page. In each triptych, the one we most want to promote is in the middle of the three.

In an interesting study out of the University of Chester, UK, researchers Paul Rodway, Astrid Schepman, and Jordana Lambert tested our preference for positioning. Test subjects repeatedly picked the middle items in a series, whether those items were varied paintings or identical pairs of socks.

Termed the “Center-Stage Effect,” numerous studies have since affirmed that we favor the middle item in a series, whether presented horizontally or vertically. Marketers have taken this strategy to heart, with the center option emphasized on a majority of sales and pricing pages.

To take advantage of the Center-Stage Effect, we will position the book we most want to promote—e.g., a new release, or the first novel in a series—in the center of a lineup rather than the end.

The “Goldilocks Effect” echoes the “Center-Stage Effect”, but with regards to value rather than positioning. When a low-priced, budget option and a high-priced, premium option are placed alongside a standard option, most consumers will pick the standard pricing rather than the cheapest option available. 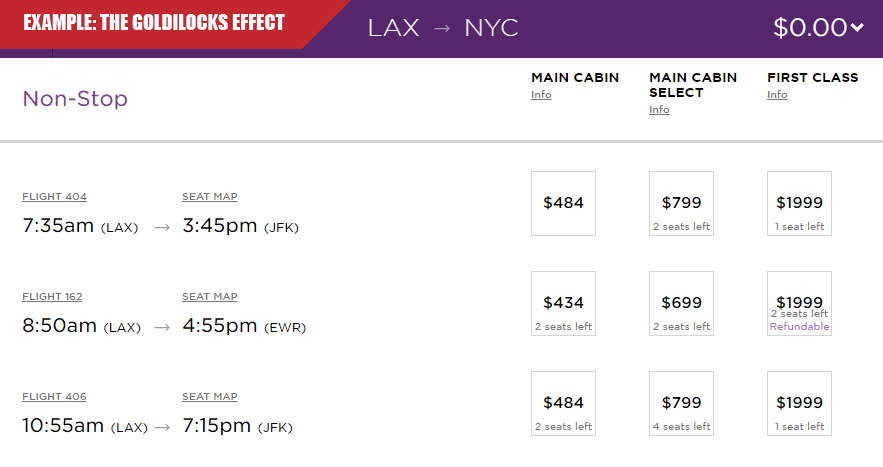 While this principle didn't factor into the site design, it's nonetheless a useful strategy for your marketing toolbox. This could be used to promote a box set, where a single novel is offered at the “cheap” price, a multi-series omnibus is offered at the “premium” price, and the preferred box set positioned comfortably in the middle.

To me, this is one of the most surprising and interesting phenomena in pricing psychology.

Behavioral economist Dan Ariely noticed an ad for The Economist which offered three subscription options: digital, for $59; print, for $125; and both digital and print for $125.

Few people would purchase the print version only when they could get the online version at no additional cost. The print-only option seems useless, so why not get rid of it?

But when the print-only option was removed, the majority of students chose the cheaper option, and only a third chose the combined option. The choice between an inferior option and its better sibling overshadowed the choice between those two options and the third, potentially less-profitable option. 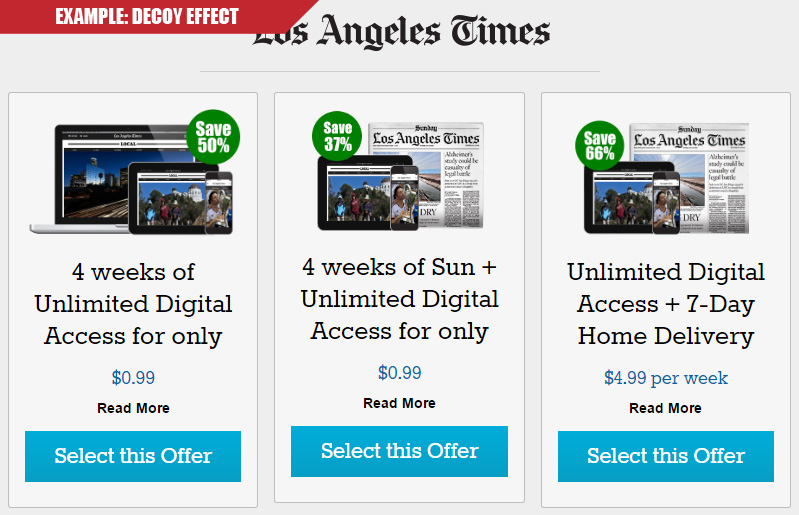 The LA Times uses the Decoy Effect — the left panel — to steer subscribers towards the middle option.

Ariely extended this concept to human faces as well. When he asked respondents to identify who they would want to go out with, Tom or Jerry (both average, computer-generated faces), responses were evenly split.

The Decoy Effect is proving useful for mailing list incentives. We wanted to encourage readers to download a particular novella, but didn't want to limit them to that single option. The solution was to offer Novella A, Novella B (the one we wanted to promote), and an option that bundled Novella B and a short story together. Early results have strongly favored the bundled option, whereas the previous layout was split between A and B.

Setting one option apart from the others adds a strong push in that direction. You'll see this done in a variety of ways: changing the color of a Buy button on the promoted option; adding a “Most Popular” or “Recommended” or “Best Seller” tag; or fading the colors of the other options, to name a few.

The key to employing this technique is to highlight only one option. If you tag multiple options, the consumer still faces a difficult choice that may lead them to abandon the sale.

We chose to tag the newest release with a brightly-colored “Hot Read!” tag to attract clicks. We will experiment further with A/B testing to find which wording, color, and style has the greatest impact.