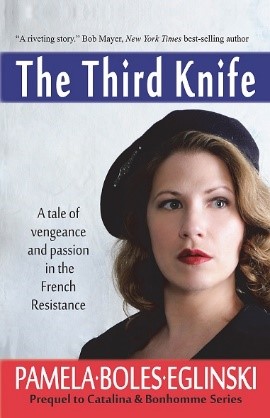 Writing a Prequel: Why Write It and How to Market It 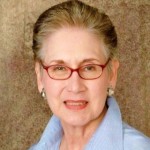 Sometimes, despite your best-laid plans to write and self-publish series of novels, an out-of-sequence idea leaps out of nowhere demanding to be written – whether a prequel or a volume that fits in between your already carefully numbered set of books. US author Pamela Eglinski describes how that happened to her, and how she benefitted from submitting to the urge to write book 0 in her series. 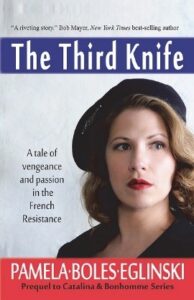 The Third Knife – but the first book in the sequence

Some readers might ask, “Why write a prequel?” The answer is simple. As I wrote the second and third novels in the series (formerly the first and second), I realized there was a fascinating backstory to be told, and the prequel was born.

I enjoyed writing The Third Knife for a number of reasons. It was my first historical novel, and because it was a prequel, I was able to reference scenes and characters from French Blue, and She Rides with Genghis Khan. Some characters in French Blue and She Rides gained fame in an earlier time, during World War II. Nonna and Edouard were members of the French Resistance, and helped shape the lives and passions of their offspring, a granddaughter and son, Catalina and Bonhomme. Simply said, The Third Knife set the stage for the next two novels.

How to Present a Prequel 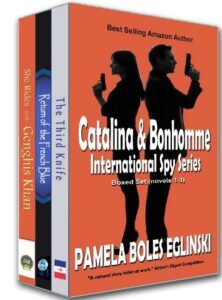 Once the prequel was completed, I packaged all three novels in a Kindle boxed set: Catalina & Bonhomme, International Spy Series.

I know authors are told that a writer’s reputation and popularity are greatly enhanced once a third novel is written, so it made sense to package all three, and also sell them as stand-alone books.

The Third Knife was published in November 2015, and the boxed set in January 2016.

How Do Prequel Sales Compare?

Written first, to be read second

Written second, to be read third

What about sales, you might wonder? Anything unexpected? Definitely. Since The Third Knife was published Pam has sold nearly 500 books, most of them the prequel. There must have been a hunger for the story!

But, there is one more unexplained curiosity.  Almost all copies of the prequel have sold to readers in the UK, Canada, and other Commonwealth nations. To date I've had one marketing campaign for The Third Knife, in early December. This was a give-away, and 1,600 books were downloaded. Since then the price has remained at $2.99. If you can shed light on the reason for this geographical pattern, I'd love to hear from you! Please leave a comment.

I plan to write two more novellas this year, and will box them together with my existing special-ops novella, so am on the lookout now for marketing advice about selling boxed sets!

OVER TO YOU Have you written a prequel? We'd love to hear about your experience of writing and promoting a “book zero”.

Pamela Boles Eglinski (“Pam”) was born in San Francisco and raised on the Peninsula in northern California. She holds a master’s degree in Asian Art History from the University of Kansas, and two additional masters degrees from Colorado State University—one in counseling, and a second in comparative history. Much of her professional career was spent in higher education and in non-profit management. She has been writing full-time for the past ten years. www.writerpamelaeglinski.com