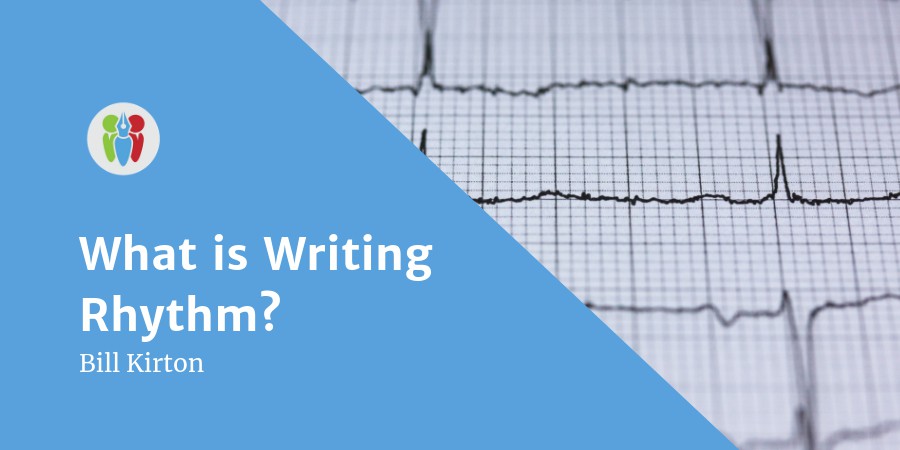 What is Writing Rhythm?

Rhythm is an obvious element in poetry but it’s just as important in stories, novels, even essays. As timing is to the sportsman or comedian, so rhythm is to the writer. Today, Bill Kirton ALLi author member, examines writing rhythm across literature.

In more formal types of poetry, there are usually rules about where stresses should fall, Shakespeare’s ‘Shall I compare thee to a summer’s day’ is a typical iambic pentameter. Switch the stress to the second syllable and the iamb becomes a trochee, as in Longfellow’s:

‘By the shores of Gitche Gumee,

Stood the wigwam of Nokomis,

Daughter of the Moon, Nokomis.’

In poetry and prose, rhythm gives you another string to your writing bow. If the rhythm’s not right, the words have less impact, you create an uneasiness, a sense of dissatisfaction. That’s fine if it’s deliberate but not if you’re unaware of it. Do it right and, as well as conveying your thinking and your effects through what the words mean, you can influence the reader by soothing or disturbing her with gentler cadences or unsettling stresses. ‘To be or not to be, that is the question’ is far more disturbing than ‘The question is to be or not to be’.

I think there must be an instinctive psychological response to rhythms at a level beyond the rational. For example, I don’t think it matters if you don’t know the ‘meaning’ of: ‘And I shall pluck ’til time and times are done The silver apples of the moon, the golden apples of the sun.’ The combination of images and rhythms there is enough to give you a feeling of wonder.

Rhythms don’t just mean smooth, uninterrupted flows; they have their own, independent power. In Marlowe’s Tamburlaine the Great, a courtier tells the king

I’ve dispensed with the line breaks but that makes no difference to the impact. The rhythms add further resonance to the words.

But it’s not just ‘noble’ rhythms that work. Othello, for example, was a great orator, with lines such as

‘Farewell the neighing steed, and the shrill trump, the spirit-stirring drum, th’ear-piercing fife; the royal banner, and all quality, pride, pomp, and circumstance of glorious war!’

But his self-assurance and conceit break down when Iago hints at Desdemona’s alleged infidelity, and he loses control.

‘It is not words that shake me thus. Pish! Noses, ears, and lips. Is’t possible?—Confess—handkerchief!—O devil!’

So rhythm works not just through its own power and consistency but when it’s broken and overwhelmed. French classical drama was highly formal. It aimed to ape what it thought Greek tragedy was like, so it was written in Alexandrines – rhyming couplets of 12 syllables, with a caesura in the middle of each line and a sort of mini-caesura after the 3rd and 9th syllables. The example usually quoted of the form at its best is one of Racine’s. (I’ll mark the caesuras with /).

‘Ariadne, my sister, wounded by love, you died on the shore on which you were abandoned’.

My apologies for a translation which is an example of very bad rhythm, completely unsuited to what’s being expressed.)

As well as being great poetry, this formal structure, including the rhyme scheme, has a specific function; it marks the pre-eminence of those speaking the words. All the main characters in classical tragedy are high-born – kings, princesses, generals, etc. They have dignity, poise, and their control of language is a mark of their elevated status. If you like, it’s another of the masks they wear. So when they seem to stumble over syllables, we know the ordinary mortal under the mask is having trouble suppressing baser instincts or just plain human emotions. My favourite Racine play is Andromaque and there’s a great example there of how rhythm does the dramatist’s work for him.

The plot is complicated but essentially it’s Oreste loves Hermione, who loves Pyrrhus, who loves Andromaque, who still loves her dead husband. So there’s not much chance of a happy ending. At one point, Hermione makes a long passionate speech outlining how Pyrrhus’s rejection of her has brought shame on her family. She ends it by urging Oreste to go and assassinate her enemy and not come back until he’s ‘covered with the blood of the infidel’  (i.e. Pyrrhus). That’s how, she says, he (Orestes) can be sure of earning her love. So off he goes. When he sees her again, he makes a long, noble speech full of noble imagery and awe at the enormity of events, declares his love for her and ends by saying that he’s killed Pyrrhus. She’s horrified at the news and immediately rejects him in a short speech where she barely maintains control of her temper (and the lines she speaks). It ends with a brusque, very ordinary, colloquial question stripped of all dignity: ‘Qui te l’a dit?’ (Who told you to do that?)

Also, it’s nowhere near being an Alexandrine. So, as well as having to get over the shock of rejection, Oreste has to finish the line with the correct number of syllables, provide the rhyme, and so on. The man who’s just made that great rolling speech is reduced to near incoherence. The complete couplet goes as follows:

(Why kill him? What had he done? Why? Who told you to do that?

Oh God! What! didn’t you. Yourself, here, just now, order his death?’)

Compare those stuttering sounds and fractured sentences with the beautiful fluid couplet (by the same author) I quoted earlier. This one still has 2 lines of 12 syllables, but there’s no rhythm, no regular pauses, no flow. The words are simple, desperate attempts by the characters to make sense of things but the broken rhythms show the crumbling of their masks. The glorious noble exteriors fall away to reveal the lost, unhinged people inside them. Rhythm and control give way to chaos.

I make no apologies for taking my examples from French literature since the formal maintenance of ‘correct’ rhythms was an essential part of its jealously guarded pre-eminence. Indeed, the famous battles between Classicism and Romanticism were fought over this same poetic form, the Alexandrine. When Victor Hugo came along and not opened a play with a king asking the vulgar question ‘Quelle heure est-il?’ but a servant replying ‘Minuit bientôt’ (when, according to one critic, the reply should have been more like ‘L’heure aura bientôt atteint sa dernière demeure’ – ‘The day will soon have reached its final resting place’), he also introduced a flexibility into the form which scandalised the old guard. Here, for example, is an exchange between two high-ranked characters in Ruy Blas.  They follow all the rules of speaking in perfect alexandrines, yet the result is as fractured as a natural everyday conversation.

There’s no need to translate. It matters little what the words are saying, it’s the form itself, the halting, breaking rhythms that convey the tension of the scene, the characters’ helplessness. Only the final, full hemistich, promising ‘I’ll kiss you’ restores balance and they retake control of themselves.

This manipulation of rhythm is a part of the writer’s skill set that’s often overlooked. It doesn’t just concern the sonorous surge of epic events or the grandiose pronouncements of eminent personages; its effects are far more subtle. For a final example, take Catherine Czerkawska’s The Curiosity Cabinet. It consists of two interlinked but separate threads and one of the pleasures of reading it lies in the rhythmic variations she achieves as she switches between them. In one, the man comes to his love’s room just to say

‘Oh, my love, I could not go to sleep without a sight of your face’.

In the other, it’s the woman who says

How do you use writing rhythms in your work? What tips or tricks can you share to help others capitalize on rhythm?

10 Top Writing Errors and How to Avoid Them

Bill Kirton has been a university lecturer, TV presenter, and had many radio plays broadcast by the BBC and the Australian BC. He’s written and performed songs and sketches at the Edinburgh Festival, been an RLF Writing Fellow at three Scottish universities and given writing workshops at schools in Scotland from Dundee to Kirkwall.
His writing includes five books on study, writing and workplace skills in Pearson’s ‘Brilliant’ series, five modern crime novels, two historical novels, a spy satire and a satirical fantasy novella. Two of the novels won Forward National Literature Awards, his short stories have appeared in several anthologies and one was chosen for the Mammoth Book of Best British Crime 2010.