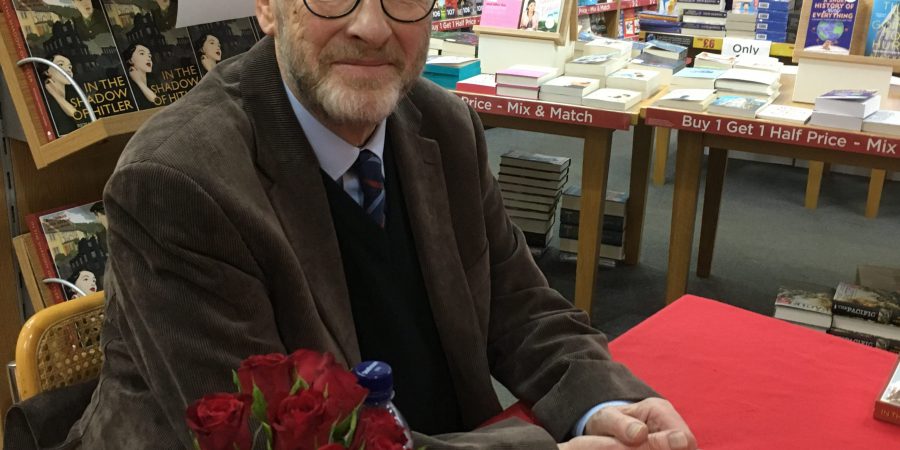 When the long-established British bookstore chain WH Smith invited applications from authors to hold book-signing events in its nationwide chain of retail sites, the first question on the lips of indie authors was “Does this include self-published books?”

We're delighted to advise that it does – as this case study of Richard Vaughan-Davies‘s recent event in a nearby branch of the store.

As with all such events, the onus is on the author to make it a success, and the starting point must be an appealing book written and published to professional standards. Richard's historical novel, In the Shadow of Hitler, was already being stocked by several local independent bookstores, which gave him the confidence to tive WHS a try. Over to Richard for a moment-by-moment account of his event, to help other indie authors make the most of such opportunities in WHS and other bookstores. He also sets it into context as part of a much longer process in the author's career.

My WH Smith Event for In the Shadow of Hitler 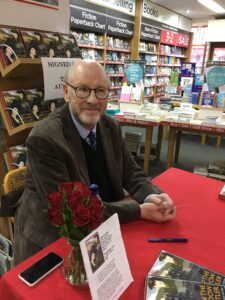 Off to A Slow Start

Well, that was a new experience! Sitting at a table with a stack of books in my local branch of WH Smith on a Saturday morning while the rain poured down. The staff had been friendly and helpful, but it felt pretty lonely for the first half hour while my partner Barbara and I were setting up our stall.

Someone asked me where to find the newspapers, and another if we sold chocolate, but otherwise there was no interest in our table.

Then some kind friends called in, and a new customer started flicking through a copy. At the end of a brief conversation he actually bought one. We were off.

From then on we were meeting, talking, and even selling on and off for the rest of the day.

Four Years in the Making 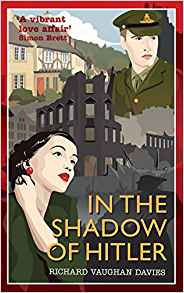 I should make it clear at once that the whole exercise of book signing is only one stage of a long process. It took me four years to write and edit In the Shadow of Hitler, and then another year to publish it.

My first effort to cobble a book together with my son’s help and upload it onto Amazon was successful in terms of some lovely reviews – but what a learning curve! I paid a third party quite a lot of money too, but we’ll draw a veil over that. I then endured the misery of submitting it to agents in order to find a publisher, with the usual predictable results.

Then I heard Debbie Young, ALLi‘s Author Advice Center Manager, speak at the Evesham Festival of Words, and light dawned. Forget that route, and publish it yourself. But the book has to look good as well  – the format and most importantly, the cover and  blurb. I found the artist I wanted, and with wonderful help from a technical friend, I finally had a product with eye appeal. This is essential for marketing.

My Stance as a Retired Retail Professional 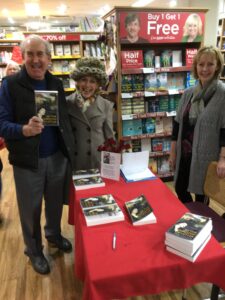 Pleasingly, Richard's stall eclipsed the paid display behind it for the famous “Richard and Judy” bookclub picks!

ow it was time to try bookshops, because as a retired retailer this publishing route appealed to me.

Two local shops took a couple of copies each, and one has ordered more. But it was a complete stroke of luck noticing that a local branch of WH Smith were promoting a book by a local author, and I was knocked out when they agreed to this signing session.

I am sure the cover sold it to them, and I doubt if the staff ever opened a copy, bless them.

Anything to do with books was clearly a distraction from their main business of chocolates and cards. But they were impressed that:

Financially?  We are not buying the house in Provence just yet. The profit margin on each copy sold was £1.23, so hopefully covered the cost of petrol and parking… (I gave Smiths a 40% discount off £8.99.)

But we met a lot of nice people who gave me a clearer picture of my target reader.

What I Learned from my WH Smith Event

I learnt some ground rules: 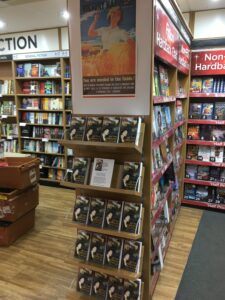 At the end of the day we went home tired but happy. And it was fun.

Book Marketing: How I Found Success in a Bookstore – A Case Study by Jonathan Hope

Richard Vaughan Davies ran a still-thriving and well-known men’s wear retail business in North Wales. He built this up from a one man shop to a million pound turnover business very rapidly by the power of press advertising. He contributed articles to MENS WEAR magazine for over thirty years, where he acted as Deputy Editor for a short time, and had a weekly business column in the Liverpool Daily Post. At a halfway point in his career point he took time off to do a combined honours degree course in English and Italian at Liverpool University. Richard has retired to the Cotswolds to write, where he runs play reading and poetry groups. “In the Shadow of Hitler” is the novel he always wanted to write since having an inspirational Austrian teacher at Malvern College. His hobby is solving and compiling cryptic crossword puzzles. Find out more about Richard at his website: www.vaughandavies.org.