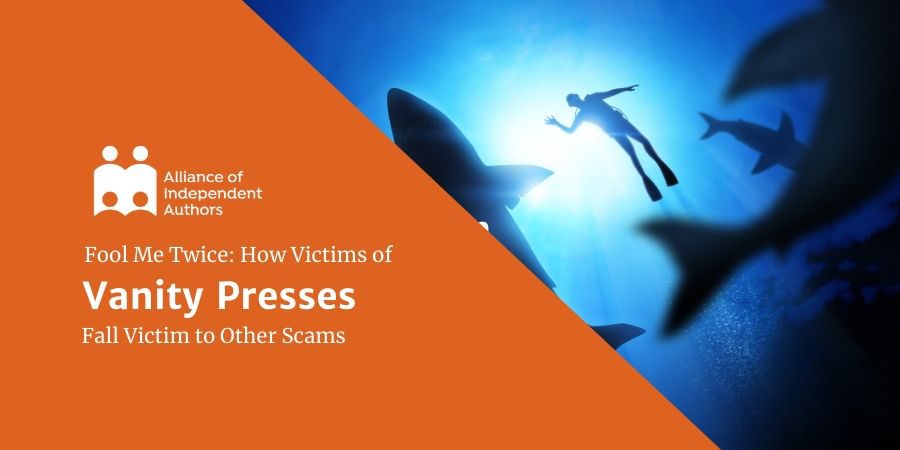 When a child touches a hot stove and burns their fingers, they learn an important lesson: stoves are hot, don't touch them.

But when an author is burned by an exploitative vanity press, the lesson may be harder to absorb. They may continue to funnel money into the pockets of the “publisher”, having been persuaded that they just need to spend a little more on marketing for that book to really take off. Or they may abandon the vanity press, only to fall into the clutches of another vanity press or scam.

The reaction is often “this stove is hot, but let's try this stove over here…”

It's easy to blame the author, to call them gullible and chide them for not doing their research, but the reality is that vanity presses feed into a vast network of seductive and misleading scams. Years of operating this way have honed their grifting to a fine point.

I'd like to share a two examples of authors who fell victim to multiple vanity presses. These accounts have been anonymized and fictionalized to protect privacy, but are based on real events.

Gray was a novice author who wanted to have his first book professionally published. He consulted a search engine and clicked on an ad for a publisher who promised professional results and a doorway to traditional publishers. Gray filled out the submission form, and was delighted to learn that the company's “editorial panel” had “selected his book” for publication.

$12,000.00 later, when he finally pulled the plug on the scam, he had a garage full of poorly-edited books and virtually no sales.

Gray set out to find a better publisher with a solid reputation. He again consulted search engines, and was presented with several listings for Author Solutions. This time, Gray checked a trusted source, the Better Business Bureau. The BBB listed the company with an A+ rating. Reassured, Gray signed up for an expensive publishing and marketing package.

In the end, Gray lost nearly $30,000.00, and didn't earn enough to cover the rental unit where he stored the books.

Hazel wanted to publish her memoir, but she had already been stung by a vanity press and was wary of approaching another company.

One day, she received an email from a publisher who had discovered her book, and noticed that it wasn't selling as well as it could be. “We can help you republish your book to get the sales you deserve,” they explained.

Hazel was suspicious. “I was told that any company that wants money to publish your book is a vanity press,” she said.

“Oh, that's not true! We're a hybrid publisher. We partner with authors, and do all the heavy lifting in exchange for a modest investment in your book. We don't make money if you don't make money.”

Hazel researched the company. It was headquartered in New York, alongside prestigious Fifth Avenue publishing houses. The website listed pages of glowing testimonials from authors just like Hazel, and bore the logos of Forbes, the Wall Street Journal, the New York Times, Amazon, Barnes & Noble, Ingram, and more. There was nothing negative on the web about the company, so she was reassured.

Hazel's “modest” investment came to more than $8,000.00, most of which, she was told, was for marketing expenses. Every email was greeted with terrific news. The book was coming along beautifully. The company had had a great deal of interest from media personalities, one of whom had close ties to Oprah herself.

But as the deadline for publication passed and she still had no book, Hazel grew nervous. After several emails, the company responded to apologize profusely. The supervising editor had passed away unexpectedly, leaving the company in a state of disarray, but Hazel's manuscript was now in the hands of a new editor, and would be ready soon.

She felt badly for being so insistent, and agreed to be patient. Months passed, with more excuses. The new editor had quit suddenly. A trusted employee had embezzled funds from the company. A hurricane had disrupted communications.

“Hurricane? I thought you were in New York!”

“Our headquarters is in New York,” the employee explained hastily. “But we have branch offices all over the world.”

Hazel demanded that the book be published within thirty days, or the company must refund her money. The employee agreed and assured her that it would be taken care of.

Thirty days passed, and Hazel bombarded the company with email, first demanding the status of her book, and finally, demanding a refund. She received no reply. She sent a certified letter to the company's address. It was returned as undeliverable.

Panicked, Hazel looked up the address, and found it was indeed an office building in Manhattan. However, the suite number listed belonged to a Mailboxes Etc. location: a rented mailbox. Further searches on the internet turned up recent stories of other authors in the same boat. No books, no royalties, no statements, no response. Some authors reported that the company was actually headquartered in the Philippines, and run by a notorious scammer.

In the end, Hazel received nothing for her money. The scammers had fled into the night, to resurface under a new name — and a new metropolitan maildrop in a city where they have no physical presence.

Both Gray and Hazel had been stung previously, and both tried to research the new companies they signed up with.

In Gray's case, he was deceived by the Better Business Bureau “accreditation”. BBB accreditation is a sham. Companies with abysmal customer services and hundreds of complaints have been awarded A+ ratings, but only after they paid for accreditation.

Under no circumstances should authors rely on the BBB's accreditation as proof of a company's legitimacy.

Neither can you rely on testimonials, as Hazel discovered. On a company's website, testimonials are cherry-picked to offer only the most glowing praise. Even reviews on services such as TrustPilot are frequently subverted by unethical companies, which pressure clients (and sometimes employees) to leave enthusiastic reviews. Some of these reviews are left by naive clients who have been shamelessly taken advantage of, but don't realize it because they have nothing to compare the service to.

One major warning sign is when a company has dozens of reviews on one particular platform, but few on other review sites. That's often an indication of an organized campaign of fake or coerced reviews.

Don't be swayed by official looking logos, even though of trusted companies. Those logos may be used without permission, or they may try to suggest a connection to a legitimate company when the only real affiliation is a purchased ad or service.

Always rely on multiple sources where possible. Industry watchdogs, peer forums, and review sites generally offer good insights into a company's reputation. However, no news is not necessarily good news, especially when you're looking for evidence of customer satisfaction.

Hazel did her best to research the company, but found little online about it. That, in itself, is a warning. A company that promotes itself as a “world leader in publishing” or similar nonsense would at least have some incidental coverage in newspapers, trade magazines, or blogs. A company with no real internet footprint may be a new creation, and that may point to a scam.

Don't be deceived by an official looking address on a website. Use Google examine the address. If it points to a maildrop or virtual office space, or has dozens of other small companies operating out of that location, be suspicious.

Hazel would not have fallen prey to this particular company if they hadn't approached her. A representative claimed to have discovered her book. Discovered how? Do publishers trawl through Amazon listings, looking for poor-selling books they can republish?

No, they do not. But vanity presses and scammers often do. Predatory operations may search for authors who have been published by Author Solutions and other vanity presses, knowing that those authors are probably dissatisfied and perhaps easy prey for scams.

Successful publishers have more submissions than they know what to do with, and they have no need of cold-calling, spam, or other unsolicited contact to chase down manuscripts. When you receive a solicitation of this kind, you can drop it in the spam bucket.

Similarly, claims that your book has been “selected” by an “editorial panel” are hogwash. This is a ploy used to stroke the ego of the author and lower their defenses. It's exciting to think that your book has risen to the top of the slush pile, where the incandescent shine of its genius was immediately noticed by a sharp-eyed editor. The reality is rarely that glamorous, though, particularly where a small and relatively unknown publisher is concerned.

Have you been a victim of a vanity press or scam? What measures do you take to protect yourself? Let us know in the comments below!