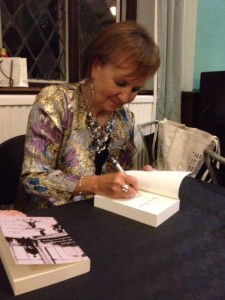 Author and creative writing tutor Lindsay Stanberry-Flynn shares the dilemma facing a growing number of authors who have been both traditionally published and self-published: which to choose? 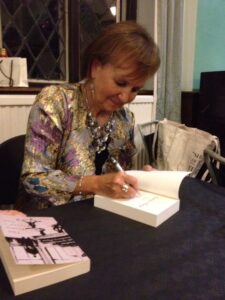 Signing books at the launch of “The Piano Player's Son”

With the publication of my second novel The Piano Player’s Son by Cinnamon Press, I’ve been pondering my new status of hybrid author. Hybrid: the offspring of parents of genetically different stock, for example a mule. With a traditionally-published novel and a self-published novel Unravelling under my belt, I’m now officially a mule!

The quality of stubbornness – commonly associated with the mule – is certainly a prerequisite for any writer, but what else does it mean to be a hybrid author?

I self-published Unravelling in 2010, just before the massive expansion in independent publishing, before Kindle Direct Publishing, before ALLi was a glint in Orna Ross’s eye! I had always believed in the mantra if your work’s good enough, it will be picked up eventually. But with the upheaval in publishing over recent years, leading to the squeezing out of first- time authors, I realised this was no longer true – if it ever had been. Self-publishing was a lonely place in those days and I embarked on it reluctantly. I had seen some very poor self- published books back then, so I chose to publish with Matador, a company recommended even by Jonathan Clifford, famously anti ‘vanity’ publishing, hoping this would get me a high quality product, able to hold its own on bookshelves next to traditionally-published books. 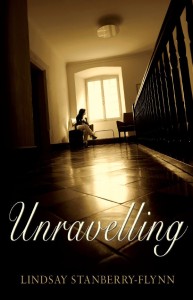 I am so pleased I took the plunge. Unravelling has been well-received, winning three awards and praise from readers. It’s brought me into contact with more writers and readers, and its publication gave me the confidence to call myself a writer. Having a book out was liberating. My work was no longer skulking in drawers, but clutched in readers’ hands. When emails from complete strangers saying how much they’d enjoyed it began to arrive, my cup seemed full.

But – and for me, this is a big but – the thrill of having a publisher declare, ‘I love your book, and I want to publish it’ is immeasurable. Cinnamon Press says ‘we select books we feel passionate about. Our titles are unique, enjoyable and thought-provoking.’ To have that external validation – to join that list of ‘unique, enjoyable and thought-provoking titles’ – is enormously satisfying.

In addition to this, The Piano Player’s Son was selected for publication in the 2011 Cinnamon Novel Award – a competition that didn’t exclude previously self-published writers. The novel was one of ten long-listed and five short-listed, eventually winning with a cash prize as well as publication. Instead of paying out money to publish my book, the production costs were covered and I received money as well! 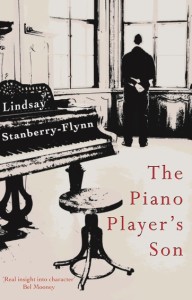 There are lots of positives to being traditionally-published, but what about the negatives? Certainly I’m more anxious this time round. If Unravelling had bombed, it wouldn’t have mattered to anyone but me. With The Piano Player’s Son, the expectations are Cinnamon’s as well as mine. Cinnamon’s costs and reputation are in the mix, and I hate the thought of the book not fulfilling their belief.

There’s also the issue of lack of control, symbolised by the famously-difficult territory of the COVER. I love the cover of Unravelling, and I desperately wanted a similar success with The Piano Player’s Son. Cinnamon allowed me to find my own image, but when I first saw the suggested cover, it was nothing like I had envisaged. To say I was upset is an understatement. But Jan Fortune of Cinnamon is incredibly supportive of her authors, and although she remained convinced her designers had come up with a winner, she did allow subtle changes, and thankfully, I’ve now grown to love this cover as well. 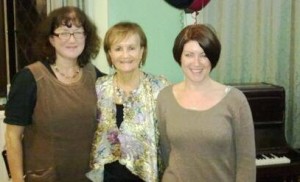 So, what’s the verdict – the traditional or independent route? I’d say both have their positives and negatives. For me, the most important thing is that my work should be read, and if a publisher is prepared to pay to make that happen – wonderful. Otherwise, the independent world has much to offer, and I can definitely feel it beckoning for my next novel.

Lindsay Stanberry-Flynn, who holds an MA in Creative Writing from Bath Spa University, teaches creative writing and is the author of two novels, "Unravelling" and "The Piano Player's Son". Her author website is www.lindsaystanberryflynn.co.uk.