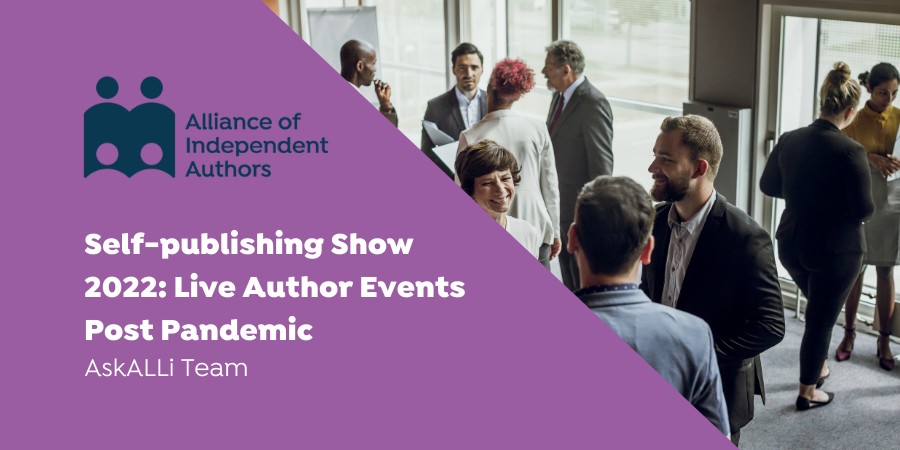 Live events used to be a staple of the annual author calendar until the pandemic closed events down, some forever, some to migrate online.  Alliance of Independent Authors news editor Dan Holloway went along to the recent Self-publishing Show LIVE in London to report on  how it feels to be at live events for authors again. 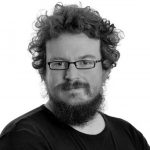 The Return of In-Person Events

Dan Holloway is a poet, novelist, journalist, editor and performer. He is also the Alliance of Independent Authors Self-Publishing news editor. Find out more about him on his website.

This week’s Self-Publishing Show was the first time I've been to an in-person event for well over two years, so it was a major milestone for me personally. And there was an extra emotional dimension to seeing so many of my friends inside and outside of ALLi again.

And I’ll start with there. Holding events in a world that has experienced Covid feels a bit like making a horror film after 1996’s Scream. Everyone has become a little meta, aware that events have formats and rules, and choices about format and content that previously would have felt automatic. 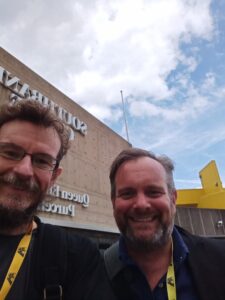 How Do Events Mix Digital and In-Person Activity?

The Self-Publishing Show offered digital as well as an in-person tickets. That was very much in-keeping with “how we do events now.” And valuable from an accessibility standpoint. But this wasn’t a hybrid event. The digital ticket bought you access to recordings of the sessions that will be available 10-14 days after the show, rather than a livestream.

It's a gamble to hold an event these days. Even one with a following like this. And livestreams are costly. So I imagine this was a cost-driven decision (at least I hope it was. Pulling back from truly hybrid events because “it’s better in person” is a tendency I see quite frequently, and as a disabled writer it’s a kick in the teeth, to put it bluntly).

Then there’s the content. Creating indie-dedicated content is always a balancing act. On the one hand, people who have had huge commercial success in writing series of genre fiction, explain how they did it. On the other, representatives of self-publishing services explain how to use their platforms. These elements were very much in evidence right across the programming.

And there were people who found these dimensions both useful and inspiring.

But an event like this needs to educate, inspire, even thrill people with what’s new—especially what offers new possibilities. An incredibly helpful aspect of the programming was the amount of time given over to information, specifically to the use of information to help with the discovery of your titles.

Data for authors has come a long way since the early Author Earnings Reports. And the tools available to us are getting more and more sophisticated. They are something platforms like PublishDrive realize can be a point of difference when competing for our titles. So it’s good to see sessions dedicated to getting the most from the tools we have at our disposal.

Everyone I spoke to (caveat—maybe that’s in part a reflection of the people I talk to!) agreed that the most exciting session was Joanna Penn’s. Her focus is on the business of being an author but as a (fellow!) futurist and tech optimist, she always updates her content to reflect emerging trends that offer interesting opportunities. She shared her knowledge and her passion for artificial intelligence and blockchain. Not just NFTs, but all kinds of blockchain applications, in particular the way smart contracts can help authors manage their growing digital portfolios in the long term.

Several people I spoke to felt genuinely excited after listening to her explain possibilities so rarely touched on in standard advice. 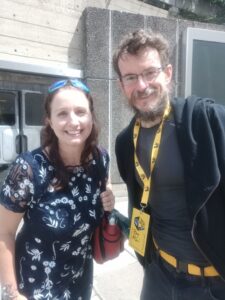 One thing I found most exciting was speaking to old friends and new from the companies who were there. Hearing about what was in the pipeline provided a concrete confirmation of a lot of what I have been hinting at in the weekly self-publishing news column, and what Joanna Penn talks about so passionately when she explains the exciting landscape ahead of us.

PublishDrive, for example, continue to be ambitious about making sure their platform offers as many different formats for authors as possible.

Audio still gets mentioned but audiobooks in themselves are now just another format, part of the landscape of self-publishing. Now it’s about how to make it easier and cheaper for us to create audiobooks. And a big part of that is the emergence of realistic AI-generated narration.

It was exciting to talk to Google Play Books about the work they’re doing in this area. They are currently testing a free tool for authors that will enable them to use high quality AI-generated narration to create audiobooks direct from their ebooks.

Things are moving fast. One of the things I reported from Futurebook was the massive untapped potential of ebooks that do not have an associated audiobook. Within a few months of that report, the biggest barrier to closing the gap between ebook and audiobook numbers, cost, is fast disappearing.

Other exciting developments included an expansion of Reedsy’s collaboration tool to allow real time remote sessions for authors and editors or, indeed, authors who write together. And PublishDrive’s Kinga Jentetics talked passionately about projects they were working on to help indie authors sell multiple formats of their books direct to readers rather than through storefronts or platforms.

This is a really exciting possibility for contributing to the Self-publishing 3.0 landscape.

Building Community: The Heart of Any Indie Event

It was great to be able to speak to many of my fellow authors. This was actually, I think, the first time I’ve met Tim Lewis, for example, although we’ve done two podcasts and talk a very week on Twitter’s #IndieAuthorChat. I got the sense from many that it was great to be among writing company again. But for some, this was their first such event. And for them there was a sense of new-found community and optimism.

Dan Parsons writes the Creative Business series for authors, bestselling fantasy and horror novels (under Daniel Parsons), and a weekly blog for The Self-Publishing Formula. He is also the Alliance of Independent Authors Publishing Production Manager. Find out more about him on his website.

“SPS Live was bigger than ever this year with several hundred authors attending the two-day event and hundreds more buying virtual tickets. The networking was relentless and everyone left with at least a few fresh ideas.
The biggest takeaway many visitors reported was that those who are succeeding  right now are writing a LOT, often publishing at least four books a year, and sometimes over 20! The Queens of Kindle, sisters Caroline Peckham and Susanne Valenti, for instance, revealed how they’ve written 52 books together in 3.5 years, all while penning 10 books each, as well.
“There were insights into TikTok from James Blatch, notes on futurist income streams from Joanna Penn, a live cover design demonstration from Stuart Bache and Amazon masterclasses from former Amazon exec Janet Margot, the current Books Team, and Kindle Storyteller winner Rachel McLean.
The watchword? Relevance. If you can bake relevance into your product and marketing strategy from day one, platforms like Amazon will do a lot of the heavy lifting for you.” 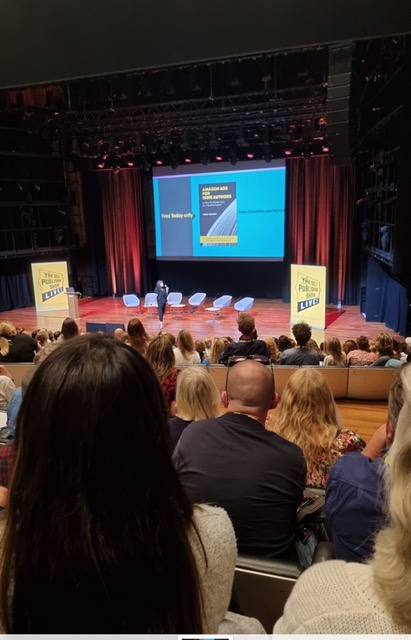