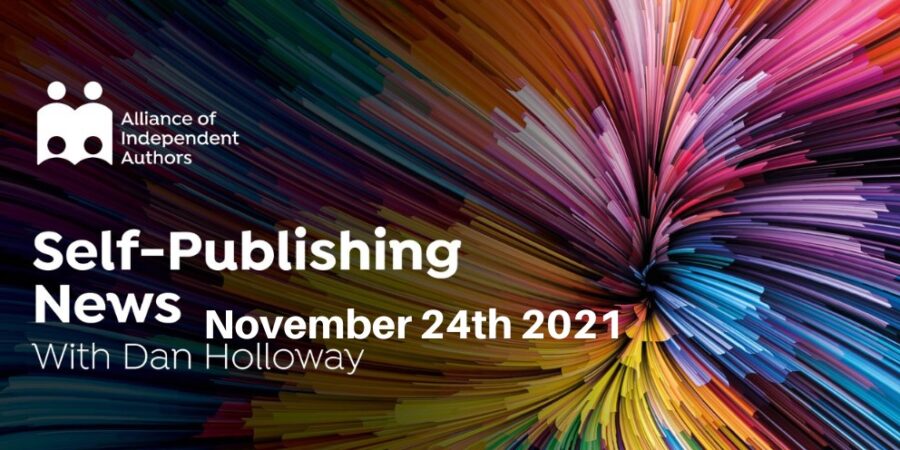 In this week's Self-Publishing News Special, ALLi News Editor Dan Holloway reports from Futurebook 2021 where the debate over audiobook subscription got heated.

Thanks to the team at The Bookseller, I got to spend last Friday (virtually) at Futurebook. Howard and I will be talking about it at length in the upcoming self-publishing news podcast. On tonight's #indieauthorchat at the usual 3pm Eastern, 8pm UK time, Tim will be leading a discussion about red flags in self-publishing.

Climate and the Supply Chain

As promised, this week’s news will take a deep dive into last week’s Futurebook conference. Coming on the back of COP26, it is no surprise that the event focused on sustainability and the industry’s impact on the climate crisis. There was a lot of talk about something I’ve increasingly reported on – the supply chain. There was much discussion about the commercial viability of printing locally. This would void some of the emissions involved in production. People didn’t really think it was feasible right now. What they were clear about, though, was that print on demand was the least damaging production method. Which is good to know.

There was surprisingly little talk about the most egregious element of publishing: returns. One slide that passed with little comment stated that 42% of emissions in the publishing supply chain were down to returns. That’s eye watering. There was also little talk about the damage done by electronic publishing. This could be a result of planned obsolescence and upgrades. Or it could be the land stripping and exploitation that goes into producing the metals for our devices and the minerals for their batteries. Maybe that discussion will come.

One thing on which there was agreement, though, was that publishing was in a unique position to contribute positively to climate change. And it could do that by focusing on its very essence: what it published. Overall, on this topic I was left with the impression of an industry full of impressive words (OK, half full) but rather too eager to pat itself on the back.

Audio has been a mainstay subject of events for many years. It felt at Futurebook as though at least some of the conversation was starting to catch up with reality.

There was a surprising amount of discussion about the use of machine-generated narration. This was positioned firmly, by representatives from Google and one of the providers of this technology, Speechki, as being about the unfulfilled potential of rights holders’ catalogues rather than eating into the market of voice actors.

We were told that 95% of ebooks did not have a matching audio title. This was portrayed as a vast loss of potential revenue. Artificial intelligence could serve the purpose not just of generating narration, but of syncing it with ebook content. Speechki, meanwhile, pointed everyone to a sample ”real or artificial?” quiz. Almost no one, it seems, can tell which of the voices there is real and which AI-generated. I have to say, I found the test samples much more convincing than DeepZen’s, which I listened to just a few weeks ago.

Positioning AI narration as “not a threat to voice artists” though, thoroughly failed to convince me. The matter at stake is a subset of the wider question of cannibalisation. “This isn’t about eating into an existing market, it’s about enabling rights holders to do something they otherwise wouldn’t.” That’s the argument for AI-driven narration being made, in essence. OK. But isn’t that the argument the same people reject when it’s pirates who use it. Or even libraries? The fact is that cannibalisation or non-cannibalisation is one of those arguments wheeled out to suit an agenda. And it gets used with little or no evidence base. Besides, this isn’t the pitch companies make to authors right now. Instead, the pitch is, “this is a great cheap alternative”. Indeed, front and centre on Speechki’s own home page is the claim that their AI narration is ten times cheaper than a voice artist.

Who Benefits from Audiobook Subscription?

The other big audio topic, of course, was subscription. Here there were wildly differing, if highly predictable, perspectives. Marcus Dohle, CEO of Penguin Random House, kicked the day off by stating of the recent trend in subscription – with a particular nod to the Spotify/Findaway deal

“I am convinced it is not good for author income, for retail, it’s not good for creating the future of longform reading for future generations”

Others preferred to look at what might happen from the consumer side. Michael Tamblyn, CEO of Kobo, put it rather succinctly:

“Will consumers start to compare the cost of streaming to the relative cost of a single book? If they do, things could get spicy”

But for most of us there the star of the show was Chiki Sarkar, founder of the Indian digital platform Juggernaut. The first thing she did was remind people focusing only on Anglophone markets what a small proportion of the total available market that is. Then, taking India as a case study, she pointed to the other real benefit for consumers in the subscription model:

“For subscriptions, customer doesn’t have to think about it. Just click and consume. Frictionless consumption.”

In 1997, Amazon introduced 1-click buying. That step probably did more than anything else to cement them in consumers’ minds as a place that existed to make consumption easy and friction free. Subscription does likewise.

For those of us worried about what this all means for author income, there was an interesting consensus. Those with experience of how consumers reacted to subscription seemed to agree that there was a consumption sweet spot of around 2 audiobooks a month. If that holds, the future might not be as dire as many fear.

There was, of course, a session on non-fungible tokens (NFTs). Sadly, it was only really half a session. So we never really found out much about how writers may benefit from them. And there wasn’t much detail given on the big topic of the day – the potential environmental impact of NFTs. As a result of that gap, though, I discovered this rather fabulous set of cartoons from Mycoverse, explaining how many NFTs are now using much less damaging platforms, like Solana.

Futurebook 2021 debates who wins and who loses from audiobook subscription and other top #selfpub news stories for #indieauthors, in one quick read, by #ALLi News Editor Dan Holloway @agnieszkasshoes #digitaleconomy… Click To Tweet