Self-publishing News: Where are the Young British Indies?

The first week in April is brought to you by a question. There is a very specific and very newsworthy reason for the question, but it is one that should be on our lips anyway. It's one that was particularly brought home to me this week as I watched my dear friend and sometime partner in literary crime Kiran Millwood Hargrave lift the Waterstones Children's Book Prize in London, and then return to Oxford in triumph to take part in a session at the Literary Festival alongside two more of my friends, Daisy Johnson and Sarvat Hasin, who have also been tearing through the literary world of late. They are all in their mid 20s (they are also all from the same *class* on the same creative writing course – do they sell that in bottles, please?). And that made me wonder – where are the young indies? Those of us here at ALLi have been lucky enough to get to know the force of nature that is Ben Galley, but where are the rest of you? Show yourselves! 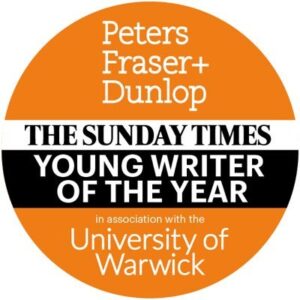 I was a student for much of the 90s. It was a time of incredible creative optimism, and at the forefront of this was a brash, brilliant loose-knit cabal that went by the soubriquet “Young British Artists.” In a way no one has done since, they got people in bus queues and at water coolers talking about art. When I entered the self-publishing fray at the end of 2008, I was convinced that a new wave of indies would do just that for books – get people talking not just about stories (though that's fabulous, and in a way self-publishing has done its bit, with a hat tip to E L James) but about the fundamental questions of what literature can be. And that hasn't happened. In large part because indieland has not produced the dynamic, iconoclastic, emboldened movement we saw in art. Yet.

Yesterday saw the launch of the 2018 Sunday Times Peters Fraser Dunlop Young Writer of the Year Award. Entries will be open until June 2nd and are open to any book published in the year leading up to that date by a UK citizen or someone resident in the UK for the past three years, aged between 18 and 35. After a hiatus the award, whose initial stagings saw wins by the likes of Zadie Smith, has been won by Sarah Howe's brilliant Loop of Jade and Max Porter's category-defying Grief is the Thing with Feathers. With a £5,000 first prize (and 10 week residency at the University of Warwick) and an organizing panel desperate to see what the best of Indieland has to offer, this is the perfect opportunity for our Young British Indies to step up and turn the literary world on its head. And if June 2nd seems alarmingly close, the Prize is committed to keeping its doors open for the foreseeable future, so please get your pens out, your ideas flowing, and your manuscripts polished.

We have talked quite a few times about the speculation that part of the new release of Windows 10 would include Microsoft's entry into the ebook sales arena, complete with their own in-browser ereader. It seems that this is, indeed, going to happen when the launch goes live on April 11. Watch this space. Meanwhile Yahoo Japan has gone the other way, outsourcing the operation of its ebook store to ebook Initiative Japan. 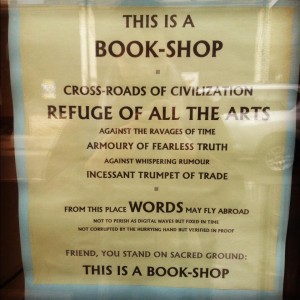 Whoever runs them, there will always be bookshops – places whose magic is perfectly expressed in this sign from Oxford's Albion Beatnik that went viral in 2013

Microsoft isn't the only ebook retail news. Yahoo. If all this leaves you wondering where Amazon are, the answer is that they are making news in bricks and mortar. As this piece puts it, Amazon will be opening a store in the coming year for pretty much every store Barnes and Noble closes. A new Amazon store really is no longer news. What remains news, for now at least, though is the other side of that equation as Barnes and Noble's shares fell over dividend concerns, taking the year's tumble so far to over 17%. Ouch.

Amazon aren't just opening bookstores though. The Amazon Influencers programme, which has just launched in beta will give those whose social media reach is largest hypercharged affiliate-style bonuses. Think “doing to the affiliate programme what White Glove and Amazon imprints did to KDP”. And Amazon Cash gives you a new way to shop with Amazon using paper money. I *think* I see how this is really useful and not at all a complete over-engineering of a problem that isn't really there. But retail news indies can definitely get excited about (thanks to Joanna Penn for the tip) is that Square, a super whizzy (and nicely designed) device you put on your electronic device to enable it to take credit card payments, is coming to the UK. Which will make shlepping bags of books round car boot sales just that one bit easier. 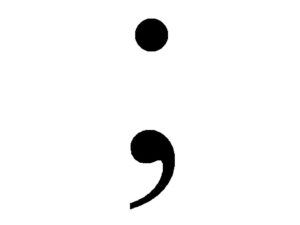 It's been a week where  grammar, and especially punctuation, has been in the news. As an editor, it would be a heinous omission for me not to mention the annual meeting of the American Copy Editors Society. The big news to come out of the conference is the acceptance by the Associated Press Stylebook of they as a singular form both for the purposes of referring to those for whom they is the correct pronoun and as a replacement for generic “he”. Chicago Manual of Style has almost followed suit, allowing all of that except the generic they in formal writing. In highly contentious news, the Oxford, or serial, comma is still not fully affirmed despite its recent role as star legal witness. Meanwhile a street artist dubbed the “Banksy of punctuation” has been going around correcting the errant punctuation of Bristol's street signs.

And it seems fitting to end our punctuation round-up with a tribute to Amy Bluel, founder of the wonderful suicide awareness and prevention organisation Project Semicolon, an initiative that has seen thousands of people tattooed with a semicolon, who died this week at the age of just 31. Next time someone tells you it's time to ditch the semicolon you may want to remind them of this initiative, in which people use the mark because it “signifies a pause where there could have been a full stop.”