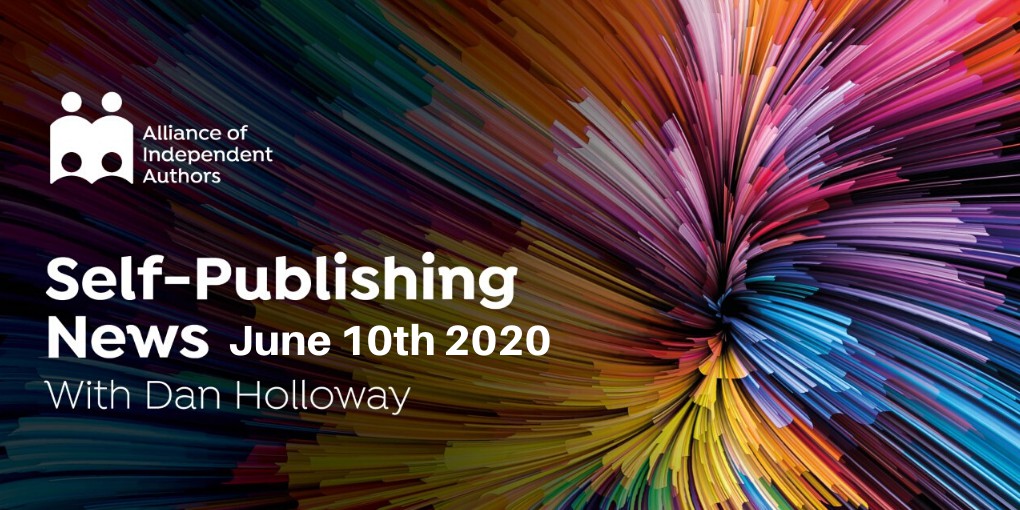 In this week's Self-Publishing News, ALLi News Editor Dan Holloway takes a look at the US Selfies Awards, a new service for ALLi members, and #publishingpaidme hashtag.

ALLi publishes a summary of the questions and answers from its weekly #IndieAuthorChat Twitter chat on the ALLi blog. This is published on the Tuesday following the chat, with last week's chat about publishing after lockdown here. And a reminder that ALLi has created a resource that seeks to answer any questions you may have about Covid-19, from concerns about the impact on events to ideas and news about how the services we rely on are responding. And as we look at online events in the news, do read this fabulous ALLi post on how to host online events as an author. You can also catch up with all last month's self-publishing news and more in our latest podcast from Howard Lovy.

The Alliance Of Independent Authors (ALLi) and the Ethan Ellenberg Literary Agency (EELA) have inaugurated a partnership to assist ALLi Authors in the management and licensing of their rights.

The Ellenberg Agency will provide an “ask me anything” style advisory service through the ALLi Member Support desk, as well as one-off representation on contract offers. And full rights representation to qualifying ALLI Authorpreneur members.

The rights covered by this agreement include translation, audio, and more. Specific areas of attention may include prior agreements, queries received, and offers. There is no obligation to employ the Ellenberg Agency in any capacity and all services are offered by member request only.

The Selfies Awards have been a big draw for indie authors at London Book Fair for the past couple of years. At least, they would have been if there had been a London Book Fair this year. This year’s Selfies went to (ALLi's) Clare Flynn and Jemma Hatt at an online ceremony on March 30th. And now the US has launched its first ever Selfies Awards. The shortlist has just been announced. The winner will receive their $1000 prize courtesy of Ingram Spark at this year’s American Library Association annual meeting on June 24th. For ALA members who really want to take part in the whole event, heavily subsidised places are now available. Following London Book Fair (and many others) that event will also take place online. Best of luck to everyone. You are all flying the flag marvellously for indies.

Are Online Conferences and Festivals Here to Stay?

Online festivals continue to be the new normal for now. With BookExpo clocking quarter of a million “visitors” it’s clear that the appetite for such events remains strong. In a fascinating piece Rakuten Kobo’s Michael Tamblyn talks about the future of the industry. He believes the continuation of online events is very much a part of that future.

And as more events move online, so does that most traditional of events, the Hay Festival, joins them, pulling in crowds of half a million. The phenomenon of festivals, as opposed to fairs and conferences, moving online, has led to a very serious question being raised in The Bookseller this week. What will the impact be on sales? The article suggests that a loss of festival sales could have a major impact on the book-buying infrastructure, and official charts.

My experience of the festival tent in Oxford is that a book can shift more than a hundred copies at a festival. If you translate that into non-fiction hardback charts the impact could be alarming.

I reported last week on the early responses of the book world to the global anger unleashed by the killing of George Floyd. This week, as Black Lives Matter protests dominated the news, every corner of the industry has been examining its past, present, and future. This interview with YA author Nic Stone is a very good introduction to what black authors are saying .

The most public of these reflections has been the #publishingpaidme hashtag across social media. Black fantasy author LL McKinney started the tag, inviting authors to disclose their advances to bring to light disparities between black and other authors. I would recommend everyone who wants to see the workings of the industry spend some time looking through the figures. It would be very interesting to see some figures from the self-publishing world as well.

Bookstores continue to struggle in the face of coronavirus. In the UK this week big and small alike have announced closures. Well-loved independent Button and Bear in Shrewsbury is closing and large chain Blackwell’s will be shutting 5 of its university campus stores. We have reported on some high profile campaigns of support for indie bookstores like City Lights and Shakespeare and Company. But while those may have been successful, if two of the world’s most famous bookstores needed that level of help, it’s worrying times for all. The additional worry is whether bookstores, which have been prominently in the news throughout, will become a real canary in the coalmine for the industry as a whole.

Let us know about great online events of interest to indies, and novel ways of moving what you do online in the comments below.