It's less than a month until what will be my third 100 kilometre ultramarathon. I have had a terrible year for training, drifting from injury to virus and back again. Of late, my injuries have been so many I have taken to doing my actual aerobic training on a rowing machine, pretty much resting my foot joints completely. This last weekend, in 90 degree sun, I finally made it out onto the trails for a long training run. And despite the disruption and change of plan, I ran the best I have done in over a year – and a day on I feel no ill effects. Now, there is a message to that, of course. And it's fairly obvious – as indies we have set out on an incredible path, reaching for remarkable goals. And when the inevitable derailments happen it can feel overwhelming. But we mustn't forget that as indies, we have the freedom to redeploy our resources and beat new, and often very different paths from the ones we expected, to lead us to the finish line.

What a Week for Amazon

You might well have guessed what the lead story would be this week even without the terrible pun in the title. Amazon has opened its wallets to the tune of $13.7billion to purchase organic food superstore chain Whole Foods. It's not 100% clear at the moment exactly what this might mean for the way Amazon works in the long term, and how that might affect us as indies or its wider plans in the book world, but it is a massive watch this space. Meanwhile, it seems Amazon is finding it somewhat harder to find its desired foothold in the Australian market owing to the rising cost of wholesale premises that would create the infrastructure it needs.

Are Ebook sales (still) declining (at all)? 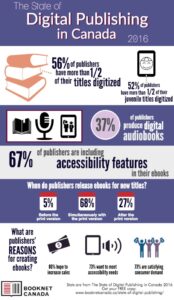 It's that time again. It almost feels like the pantomime call and response of “he's behind you”, “oh no he isn't”. No sooner does a trade association declare that ebook sales are falling than indies will cry “oh no they're not” – or, more accurately, “oh, well I'm not sure we have sufficient data to deduce that”. This month sees a reported 2% fall in ebook sales in Canada for 2016 as compared to 2015. The full report is here. It's particularly interesting to read Porter Anderson's always-nuanced account of the figures, and then read the take from never knowingly on the fence Good Ereader, who attribute this directly to the increase in digital library offerings. Meanwhile,

For the sake of balance, and staying true to formula, we follow the announcement of a mixed time for ebooks with more audiobook bullishness, a perfect way to celebrate the start of #loveaudio week as the UK Publishers Association are calling it. Do get involved on twitter and elsewhere. The rally exciting news in the audiobook world is that Draft2Digital have announced yet another exciting new offering. They are partnering with Findaway Voices, with a launch date of July 18th, to offer indies an alternative to ACX for producing an audiobook every step of the way from meeting potential voice actors to pushing the book out across platforms. Authors will get to keep 80% of the royalties Voices receive from each platform.

Erotica is one of the biggest sectors of the indie literary world, and its writers often lead the way in pioneering good practice for getting their books efficiently to their avid fan base. One of the ways they have done that is the very early adoption of the collective/cooperative model of author collaboration. Some of these have coalesced into small presses run by writers – I first became aware of Selena Kitt's Excessica in the very earliest days of Smashwords, for example, and Selena continues to be one of the great champions of indie causes, and too often goes unsung in “mainstream” indie circles. Sadly, there has been a darker side to such seeming collaboration, with unscrupulous opportunists taking advantage of authors seeking the advantages of banding together. Which is why the prosecution of Jana Koretko of JK Publishing, for falsely declaring royalties and withholding payments from authors (totalling $125,000) is such welcome news.

You may well have seen this wonderful mix of art, information, and literature doing the rounds this week, but if not, here is Atlas Obscura's fabulous piece on the structural maps of choose your own adventure stories.