In this week's Self-Publishing News, ALLi News Editor Dan Holloway fills us in on the latest with PublishDrive's new subscription plan for authors, Amazon's new one-tap review feature and the latest from the libraries versus publishers clash.

For many of us this past week has been about DigitalBookWorld. Fortunately ALLi's Boni Wagner-Stafford has produced a fabulous round-up of everything that happened. You also have a little while longer to catch up on ALLi's online self-publishing conference from the weekend. And of course if you join, you can access it forever.

Last week feels like it was one of those breathers in a frantic plot. This week the action is back.

First up, not one but two moves destined to cause controversy. The first of these comes from PublishDrive. We reported a while ago that they had introduced an author subscription alternative to royalties. Authors could pay $100 per month and keep all the sale value from all stores. It was clearly aimed at indies who were high volume in every sense. PublishDrive will now only be offering subscription packages for new authors. There is a free option (if you have only one book). But the paid subscription options run from $19.99 per month for 5 books to “price on application” for unlimited books. All options allow you to keep full sales values. It's a bold move and it will be interesting to see how authors respond.

Amazon has introduced a new one tap review feature in beta. This will enable customers who have made a verified purchase to leave a star rating with a single tap. It would remove the need to leave a review. The plan is to apply it to all products. My initial conversations with authors suggested a very favourable response. Anything that makes giving ratings easier is welcome. Thanks to Margaret Skea for asking the crucial question of whether the “minimum spend” will affect eligibility. To be confirmed…

Libraries on the offensive/ Audible latest 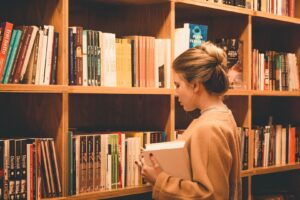 Photo by Eliabe Costa on Unsplash

You will probably have noticed that this week was DigitalBookWorld. The Amercian Libraries’ Association decided to mark the occasion by taking the front foot in their ongoing battle with publishers. They used the conference to present a petition. Their demand is simple. They want publishers to quit the restrictive measures that mean libraries pay inflated rates for ebooks they can lend only a few times. It is very interesting to see how the book world has responded to this controversy.

One of the few figures outspoken on the librarians' side is Passive Guy. His take is well worth a read and focuses around publishers' (lack of) understanding of tech business. In particular he questions publishers' reasoning. They claim library lends are cannibalizing publishers' sales. This may or may not be true, but he argues it is irrelevant. Innovative tech businesses cannibalize themselves before others can do it for them. I think that's a business-y way of saying “how about working with libraries?”

There are also developments in the Audible captions row. The International Book Publishers Association has joined the Association of American Publishers (AAP) in condemning Audible's captions feature. Audible has confirmed that it will not be rolling the feature out until after the lawsuit brought by the AAP has been heard.

The Resale of Ebooks

On the subject of ebooks, there has been a key legal opinion (an interim legal thing that’s basically the step before a ruling and indicates what might happen in the ruling) in Europe. The opinion states, effectively, that there is no resale market for ebooks. This means that the so-called principle of “exhaustion” does not apply. “Exhaustion” is the principle that the rights enforceable by a rightsholder in a “copy” of their work (e.g. a book) run out once you first sell that copy. It's true of books. But it looks like it may not be true of ebooks.

Would you rather pay your distribution platform a set amount each month? And do you like the thought of readers being able to leave a rating with a single tap? Let us know in the comments below.