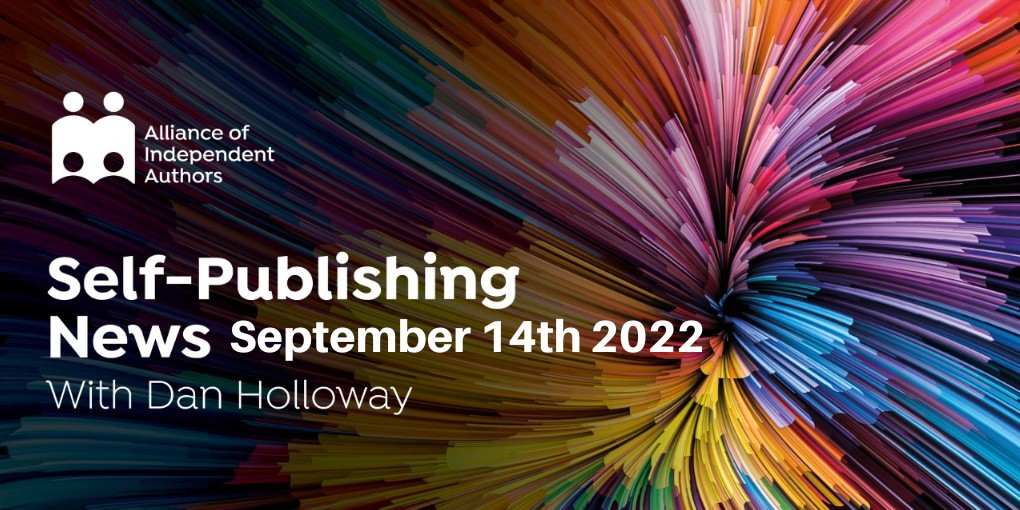 This week's #indieauthorchat on mailing lists took place yesterday in a one off. Keep an eye out for the writeup on Thursday. Next week we're back on Wednesday, at 8pm UK time, 3pm Eastern Time. Tim will be talking with us about building non-book income.

Spotify has been getting its ducks in a row ready to launch its major play in the audiobook market for some time. First there was the partnership with Storytel in Summer 2021 to distribute its audiobooks. Then, in November 2021, Spotify acquired the audiobook platform Findaway. This year they added AI-generated narration platform Sonantic to their portfolio.

And in June of this year, Spotify doubled down on its ambition for audiobooks at its investors day. Spotify wants to be the one stop shop for all things audio. It believes that the potential for audiobooks within that is a share of a $70bn global market, almost 10 times the current size.

It seems that Spotify is now ready to start playing that audiobook hand. At a presentation last week, CFO Paul Vogel announced that imminent trials would, in his words, “innovate and create something that is different.”

What was particularly interesting about the announcement for us is that Vogel reiterated his CEO’s earlier message that Spotify wants to grow the audiobook market as a whole rather than just take current market share. And that he sees working with writers as a part of Spotify’s journey. Expect trials to start soon. And if you see audiobooks in your future, get ready to get on board as soon as the opportunity comes.

Take Part in Research on the Traits of Self-publishing Writers

The UK’s Kingston University is home to much of what academic research there is on self-publishing thanks to the presence of Alison Baverstock on its staff. A new survey seeks to provide a base for valuable research into what kinds of writer might be best suited to self-publishing. You can contribute to the Survey here before October 16th.

The research by Holly Greenland seeks to establish, in her words, “if self-published authors share characteristics or personality traits, and what this could mean for both authors and the industry.“ It is open to writers based in the UK. I look forward to sharing the results.

Waterstones Troubles Part of a Wider Crisis in Distribution

The UK’s biggest chain of bookstores has had a tough few months. Since switching its warehousing and logistics software, the firm’s stores have been unable to order the stock they want. Not great for a chain whose CEO, James Daunt, has often boasted that what sets them apart is the way local stores use local knowledge to curate their stock.

The latest story to come out of Waterstones is that they are asking publishers to deliver orders direct to them. What this means in practice is publishers using distributors like Ingram to send books directly to stores rather than an all at once delivery to the Waterstones warehouse, from where Waterstones manage the onward delivery chain. According to the Bookseller, the impact of this move on small and independent publishers has been such that some have withdrawn their books from Waterstones for the time being. This means losing sales to the chain's more than 300 stores.

This comes at the same time as distributor Orca Book Services faces increasing difficulties. The distribution company has consistently failed to deliver or been slow to deliver. This has left publishers with high levels of inventory in the warehouse during the window when books need fluid supply the most.

I’ve written about distribution problems before. We’ve seen a lot of noise about the potentially harmful effects of big publishers merging. We hear less about the collapse and merger of distributors. But these problems highlight the need for a vibrant book supply industry. As Indies, it’s right that we increasingly look at opportunities to sell more than ebooks. But to think about the full range of markets, we need to know that the infrastructure is there to support us. When it comes to print books sold through retailers, that infrastructure is getting harder to trust in.

Earlier this year, Ireland announced a basic income scheme for the creative arts. The scheme will pay 325 per month to 2000 creative artists over a period of two years. The scheme aims to make it easier for people to pursue the creative arts and to prevent the loss of skills as people struggle to make ends meet. The Irish government has just announced the first recipients of the awards. 184 of them come from “literature.” Given that the scheme is for creative artists and not everyone involved in supporting the industry, I have parsed that to mean writers. 707 awards went to visual artists, 584 to music and 204 to film. Literature was next on the list, above theatre with 173. There's no indication how many of the 184 were indie authors. But indies were eligible to apply.

Recipients will need to give a fairly detailed account of what they do. Not to “check up” on them but to ascertain whether the scheme has achieved its goals. If it does, then it might be the start of something bigger.