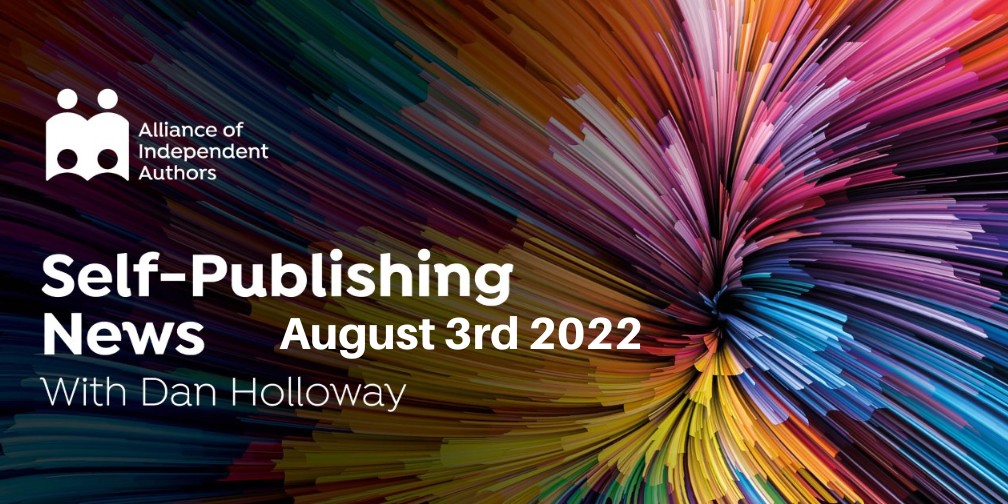 In this week's Self-Publishing News Special, ALLi News Editor Dan Holloway looks at Sora, Comics Plus and the downloads from school libraries that don't make it into many sets of industry figures.

This week's #indieauthorchat is tonight, Wednesday 13 July, at 8pm UK time, 3pm Eastern Time. Tim will be talking about Amazon's A+ content.

It's fabulous to report that Children's Literature have funded two scholarships for ALLi authors of books for readers up to 18. The scholarships will each cover $100 in award entry fees for children's and young adult authors. All eligible ALLi members can apply, by emailing this form with their entry to [email protected] This is a fantastic opportunity to get your book into the hands of judges and through them to a wider audience. You can use the scholarships to cover fees for awards of your choice, depending on what suits your book best. In order to apply you need to make the case for your book, explain the awards you would like to enter, and tell Children's Lit what impact this will have on you as a writer. Entries are due by October 1 and winners will be announced at ALLi's Autumn/Fall conference.

In the past week or so, I’ve seen some really interesting stories that provide a fuller picture of who is downloading ebooks and where. Both of them relate to downloads through school libraries. And one of the things that makes this interesting, as Mark Williams points out in relation to one of the stories, is that when we get official figures about the number of downloads, those figures don’t include this kind of download. So when we see stories, like this one on BookRiot that’s been doing the rounds this week, saying ebook figures are down, we need to take them with a pinch of salt. It’s also interesting because it would be easy to believe from many headlines that schoolkids no longer read.

This ties in neatly to a story that will be of great interest to those with a long memory. Thanks to Nate Hofelder for the tip through his Monday morning coffee newsletter. Bookstat is, as many of you will know, the child of Paul Abbassi. You probably know him better as Data Guy. Data Guy was the anonymous superstar at many a conference in the 2010s with his regular Author Earnings Reports. These sought to give the real story of what indie authors were earning. The story you wouldn’t find in the figures from Nielsen Bookscan. They were based on what one can best describe as good guesswork.

The Author Earnings Report turned out to be a promotion tool for Bookstat, a company that provides metrics to the publishing industry. This summary of what Bookstat does from the press release of this week’s story certainly paints a rosy picture of the company:

“Bookstat provides visibility into the whole market and is the only industry data service that tracks all online book purchases at the retail point of sale regardless of publisher type.”

Abbassi has clearly lost none of his ability for creating hype. What’s interesting is the purchaser. Podium Audio, who clearly share Abbassi’s comms team, describe themselves as the “fastest-growing digital publisher.”

So let’s look at those stories I mentioned above. First up, come the figures from Overdrive’s Sora app. That’s the app that distributes Overdrive’s catalogue to school libraries. Downloads through the Sora app have now reached 100 million since its 2018 launch. 87% of these have been ebooks and the balance audio.

Next there are figures for Comics Plus. In the first half of 2022, the platform clocked up half a million downloads. Those almost all came from the 200 school libraries that use the platform.

The comics market has been booming, and this is a continuation of that trend. But what’s really interesting is, as Mark Williams hints, the light this sheds on claims such as those Bookstat makes to provide “the whole picture.” No picture of the literary landscape can be complete without taking libraries into consideration. And we’d do well to remember that as writers.

Spotify has announced its intentions to take over the audiobook market both literally and metaphorically in recent months. As well as actually saying as much, the company’s biggest statement of intent has come in the form of its acquisitions, First there was Findaway. That gave it access to a catalogue of audiobook titles. More recently was Sonantic. That’s the AI narration company that will enable Spotify to generate audiobooks (and offer authors the opportunity to do so) cheaply from text.

What has remained a mystery until now is how much money Spotify has put into this move. The acquisition of Findaway, we learned this week, cost 117m Euros. Sonatic also set back nearly 100 million at 91 million Euros. That means the total outlay is about 10% of the $2bn Penguin Random House is trying to pay for Simon and Schuster in the attempted merger that goes to court this week.

Last week I talked about copyright and artificial intelligence. Specifically, I talked about the possible implications of OpenAI’s announcement that it would allow people to make money from the images that its DALL-E 2 platform generates. This week's news shows the kind of ways companies might try to make money from tools like this. PromptBase is a startup that will charge $1.99 to give people great text prompts to produce the images you are looking for. The rationale behind a company like this is that AI isn't great for giving you the kind of image you want to produce using the words you think you need to feed it. PromptBase uses its own machine learning to provide you with better prompts for what it thinks you want to do. We really are in the realms of the meta!