In this week's Self-Publishing News, ALLi News Editor Dan Holloway fills us in on the latest with a new Green Books Manifesto and Libraries facing tougher terms from publishers.

This was a week when grammar was big news in the UK. The new Leader of the House of Commons, Jacob Rees-Mogg, issued a much-tweeted-about set of “guidelines” to his staff. These included a list of banned words. There was also, most controversially, what appeared to be a misunderstanding of the Oxford comma, and an injunction to double space after a full stop. Opinions naturally ran high but as an editor it was, at least, something for me to see grammar in the news.

Publishers and libraries continue to face off 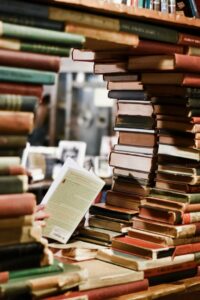 Photo by Allie Smith on Unsplash

Libraries and publishers have been feuding for quite some time. The subject of the disagreement is the terms on which ebooks are made available to libraries. Libraries were once able to lend out ebooks they had purchased in perpetuity. And where that option was not available, libraries could at least rely on as many lends as they would expect from a paper book. Recently publishers have been changing their terms. It started when MacMillan embargoed books from their Tor imprint for 16 weeks after publication. More recently there has been a rise in metred usage, with libraries paying higher rates for more popular books. Now MacMillan has announced a new policy for its whole output. For 8 weeks after publication libraries will be allowed a single copy only. After that period, they can buy more copies at a higher price, with metred usage.

MacMillan insists this is vital to stop libraries eroding the level of royalties their authors receive. Others point out the vital role libraries play in fostering literacy.

Wherever you stand on the issue, one thing is clear. It has never been easier for indies to make their ebooks available to libraries. If traditional publishers making it harder for libraries to lend their books has created a gap, it’s one indies can easily fill.

Every business has become more conscious of its environmental impact. For the book business, that impact is evident in practices like returns, and the way books are packaged to stores. Now, in the UK, the Booksellers’ Association has launched a Green Books Manifesto. It aims to work with the other stakeholders to commit to reducing the industry’s impact. Packaging and returns are obviously at the top of the agenda. Again, this may be a real playing field-leveller for indies. We have long struggled with selling through bookstores because of the industry’s returns practices. If the industry eliminates the practice, it will be just that bit easier for us to compete.

A great tool for everyone wanting to make the most of global opportunities is Streetlib’s fabulous industry newsletter Publish Africa. Streetlib has committed itself to having a storefront in every African market. And it has backed that commitment by providing invaluable insights into those markets. You can sign up to the newsletter here.

Amazon has taken a small step this week by rolling out Amazon Charts in the UK and Germany. Available for 2 years already in the US, these charts offer insights into the most read as well as the most sold titles in digital formats.

But the giant leap was the announcement that horror legend and bestselling behemoth Dean R Koontz is moving to Amazon publishing. Amazon has been scooping up authors for some time. Many indies have gone on to success with Amazon imprints. But this really does mark their arrival as a big publishing player. You may already be sceptical about bias within algorithms for Amazon’s own titles. If so, expect to feel a lot more so in the months to come!

What opportunities do you see for indies to help make the book business greener? Let us know in the comments below.