Self-Publishing News: The Value of Libraries

In this week's Self-Publishing News, ALLi News Editor Dan Holloway fills us in on the latest with big publishers changing their ebook terms for libraries while libraries offer new opportunities for indies, a look at what Libra means for indies, and new markets for audiobooks.

This has been one of those weeks when two parts of my life intersect that are otherwise separate. After a selection process that makes Kindle Scout look orderly and considered, Oxford has a new Professor of Poetry, Alice Oswald. This is also one of the few times poetry hits the mainstream media, and a good reminder that poetry is Ingram Spark's bestselling genre! 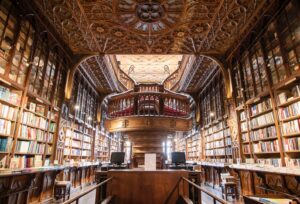 Photo by Ivo Rainha on Unsplash

Libraries have dominated the literary news this week. This week Hachette followed Simon & Schuster and Penguin Random House in changing the terms on which they make ebooks and audiobooks available to libraries. Instead of libraries buying a perpetual license to lend ebooks, they will have to renew that license every two years.

The Authors Guild of America and the American Libraries Association have, predictably, reacted very differently. For the Authors Guild, this is part of the balance that has to be struck between the value of libraries and the reduction of revenue for writers and publishers. The ALA, meanwhile, expressed concerns over the limiting of access to reading. The two year fee may be a reduction on existing rates. But to keep a book available in perpetuity will cost considerably more.

Which leads nicely into the second story. School libraries have been connecting to their local public libraries. OverDrive’s Sora app for school libraries makes this possible by plugging into the OverDrive feed to local libraries. The result has been a 249% increase in school reading.

The conclusion? While publishers struggle to make the most of the potential libraries offer their authors, indies who use OverDrive can tap right in.

What Does Libra Mean for Indies?

Anyone with any kind of interest in technology will know that this week Facebook announced it will be launching its own cryptocurrency, Libra. There is lots to say about Libra, and people have said most of it. The problem it is likely to face in many places is managing tax regimes. This is a problem for cryptocurrency in general – authenticating the appropriate regime under which an anonymous buyer and an anonymous seller should pay sales tax.

But there are some really interesting possibilities for local transactions in emerging markets. This might mean an opportunity for those of us looking to sell into these markets. We might see a choice of small local platforms taking advantage of the agility Libra offers them.

StreetLib, who have made it their mission to give indies access to global markets, are already exploring the possibilities of blockchain in Nigeria. They made the case for moving away from traditional financial structures in a talk at the recent Nairobi IPA Summit.

Where do your buyers come from?

We all get frustrated by the lack of return on advertising investment. Yet we all also believe we know instinctively where we should be doing that advertising. The fact there are courses for authors on how to advertise on Facebook and Amazon gives a hint. This is despite the story I brought you a few weeks ago on the rise of Twitter’s bookish micro-influencers. A new report on where publishers get their social media-driven sales makes really interesting reading in this context. One particularly noteworthy element is how low Instagram features in terms of profitability.

We know that the number of people listening to audiobooks in established digital markets is growing. But in emerging markets part of the problem can be the lack of channels for getting our books to potential audiences. Audible, for example, has a very limited reach beyond the big, established markets. So it is great to see two stories of audiobook providers expanding the options we have.

Swedish-based platforms Storytel and Bookbeat have both announced they will be making audiobooks available in new areas. Bookbeat is launching 24 new markets. The one that will be most interesting to watch will be Germany. Both companies have their eyes set there, the first time they will go head to head in a market where Audible has a firm footing.

Are your books being borrowed from libraries? Do you think this is a good thing for introducing your work to readers or a bad thing for reducing revenue? Or on Twitter? Let us know in the comments below.