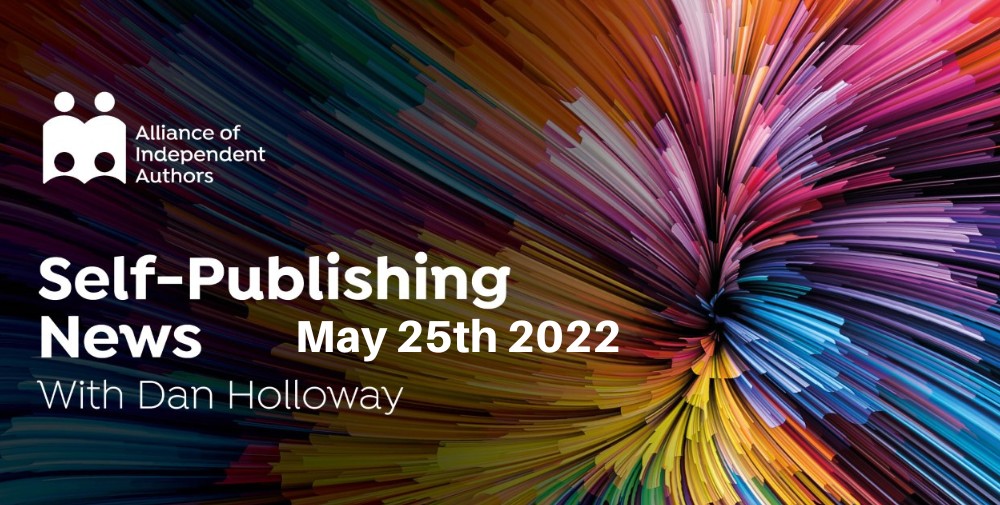 This week's #indieauthorchat is tonight, Wednesday 11 May, at 8pm UK time, 3pm Eastern Time. Tim will be leading us in a discussion about updating our websites (something I know I need to work on  – I don't  think I've done parts of mine in about 5 years!). Please do listen to a special London Book Fair Self-Publishing News podcast here. Howard takes in all the fun of the Fair. He also speaks to everyone about ALLi's 10 year story so far.

Low content book might sound like one of those run for the hills scam warnings. But by and large it’s just another way of saying that a book is intended to be bought for use as stationery rather than read. (Though I have to say, I’ve seen some fairly shady tactics used to sell notebooks on Amazon. Most involving a cover/title that suggests a link to a popular book. Especially self-help books, like Atomic Habits). The KDP page puts the definition very clearly:

“A low-content book has minimal or no content on the interior pages. These pages are generally repetitive and designed to be filled in by the user. Common examples include notebooks, planners, journals, and other similar works.”

KDP is changing the rules for those of us who publish such books. Under the changes, free KDP ISBNs will no longer be available to low content titles. They will, that is to say, be treated more like stationery than books. You will still be able to add your own ISBN but there will be no need to do so. What you will need to do, however, is tick “low content book” when you select your book's category. If you fail to do so, your title will be rejected.

KDP has also announced new reporting features in beta. The main change here seems to be an estimate of Kindle Unlimited earnings in closer to real time. I've just logged in for the second time today and the new reports seem to be there. I have to say I rather like the easy to read data. The presentation of royalty estimates is clear and broken down much more intuitively than the previous reports displayed things. Each book has its own breakdown of royalties by sale type and Kindle Unlimited page reads. And this concertinas out to give market by market information.

As a speed reader and a writer, it always piques my interest when a new reading app or fad does the rounds. In large part this is because they tend to be based on really bad science (one of the bizarre corners of the internet in which you will find me is as the subject of a documentary by Quartz magazine about the science of speed reading, which follows me on the journey to winning the third of my three European Speed Reading Championships).

The latest thing to go viral is “Bionic Reading.” This is an API that you can use to change the way text is displayed on your screen. Ostensibly, the new display makes it easier to read more smoothly and more quickly without losing comprehension. What the API does is to make the initial letters of a word appear bolder than the rest. There’s some spurious justification about letting the brain fill in the blanks.

But the actual mechanics of this approach is really sound. Reading comprehension takes place when the eyes are still and focused on a word or words. Those moments are called fixations. Most of what slows down most people when reading is that the movement between fixations can be uncontrolled—your eyes dart around and don’t move smoothly from one point to the next. And most effective speed reading techniques are about providing a guide for your eyes to help make this movement smoother. Which is exactly what is happening here. So I rather like this. I’d even go so far as to say I recommend it, which isn’t something I say very often about speed reading techniques!

Literary Prizes and NFTs: A Partnership No One Needed?

Last week’s item on the Terra crash prompted some robust but fascinating discussion among ALLi members. So it is with a little trepidation that I include another piece about NFTs. But this really is an eyebrow raiser. A major literary award has partnered with NFT platform Creatokia to produce non fungible tokens (NFTs) of its latest shortlist.

The German Non-fiction Prize is offering special edition NFTs of the 5 shortlisted books which will include additional content such as, interestingly, the prize jury statement on the book in question. Creatokia’s John Ruhrmann said, “At Creatokia, we’re betting on the idea that literature and the ‘metaverse’ belong together. Or, put another way, in reality, literature is already a metaverse in its own right.” His words will bring, I think it is fair to say, excitement to some authors, terror to others, and eye rolls to others still.