In this week's Self-Publishing News, ALLi News Editor Dan Holloway fills us in on the latest with UK Government's report into Author Earnings, Indie Bookshop Week, the enormous potential for ebook growth across Africa, and a mixed week for Amazon initiatives.

At the weekend a writer friend of mine asked a really interesting question. Would there ever be a level of opportunity for indies like we saw in the early years of Kindle? Would we, specifically see author earnings for indies reach those levels? Obviously we could fill a book with answers, but it made me think. Maybe the big opportunity we have now lies not in new technology but in new markets. That's certainly a theme of this week's news.

This week saw the release of a really important author earnings report based on the UK’s official industry figures. The ones which show median earnings at £10,500 per year from writing activity. The report on author earnings from the UK government’s All Party Working Group can be downloaded from their website.

What is really interesting is that ALLi was one of the groups consulted in drawing up this report. That, of course, is fabulous. The resulting report is less so. Self-publishing is referenced twice in the roughly 30 pages, ALLi once. Those references still see self-publishing as, effectively, something authors have been “driven to” because of the difficulties with traditional publishing.

I would offer a detailed commentary on the shortcomings of the report, but thankfully I don’t need to because ALLi has produced a great official response, which you can read here. 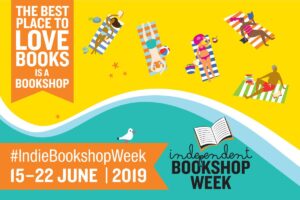 A few weeks ago I reported on Indie Bookstore Day in the US. With more than 500 participating stores, the event was a huge success, and saw sales reach a level they would otherwise only reach in the run-up to Christmas. This week sees a whole week devoted to indie bookstores in the UK.

I'm delighted to share the news of a new award, The Mo Siewcharran Prize. The award is for unpublished writers from a BAME (Black, Asian, and Minority Ethnic) background and comes with a first prize of £2500. Entries close on 29 July. The prize is named after a very much loved figure in the publishing industry.

Last week saw the International Publishers’ Association’s 2019 Africa Seminar in Nairobi. Markets across Africa should be right at the top of our radar as indies. The region has, according to the usual narrative, “jumped” a technological stage by moving straight from a largely analogue culture and economy to a mobile one. This receives a lot of attention in the wider business community. It has enabled fast adoption of micropayments, for example. But it has not yet spread fully to publishing. One figure from the seminar is that Africa represents just $1bn of the global $143bn publishing industry. That represents massive potential. And it’s that potential which makes Africa so important. And with StreetLib announcing a pan-African digital hub, it will very soon be possible for indies to reach every one of the more than 50 markets on the continent.

It’s always interesting to see how new ventures from large corporations fare. We tend to think of the behemoths in any sphere as having an automatic pass to success. But of course that’s not true. As if to make that point, this week Amazon announced that it will be shutting down Amazon Spark. Amazon Spark was a social shopping app that tried to replicate Instagram’s success at using the reach of influencers to sell things. With hindsight it’s clearly a catastrophically bad idea. But when every second, as well as every cent, we spend on marketing matters, it’s important that we learn lessons. And the lesson here is that communities grow organically around things they love, and sales come from those interest-driven communities.

On the other side of the Amazon coin is the runaway success of Audible. This week, Audible announced a rebrand of its “Audible Romance” package. This lets subscribers in the most avidly-read genre listen to as many books as they can. It is soon to become “Audible Escape”. Over at the Digital Reader, Nate Hofelder draws the inevitable conclusion – maybe other genres with similarly avid fans will join the package soon.

Somewhere in between is the Kindle Storyteller Award, which is now open for entries until the end of August. There is a £20,000 prize, whcih is great. There are also very highly respected final judges, also great. How books get under the noses of those judges is far less transparent. But if you are publishing on KDP Select in the next couple of months anyway, go for it!

A report into low author earnings fails to get to grips with indie publishing, indie bookshop week & other top #selfpub news stories for #indieauthors, in one quick read, by #ALLi News Editor Dan Holloway @agnieszkasshoes… Click To Tweet

Do you think the wider cusiness and political community understands the unique challenges and opportunities of being an indie author? Or on Twitter? Let us know in the comments below.