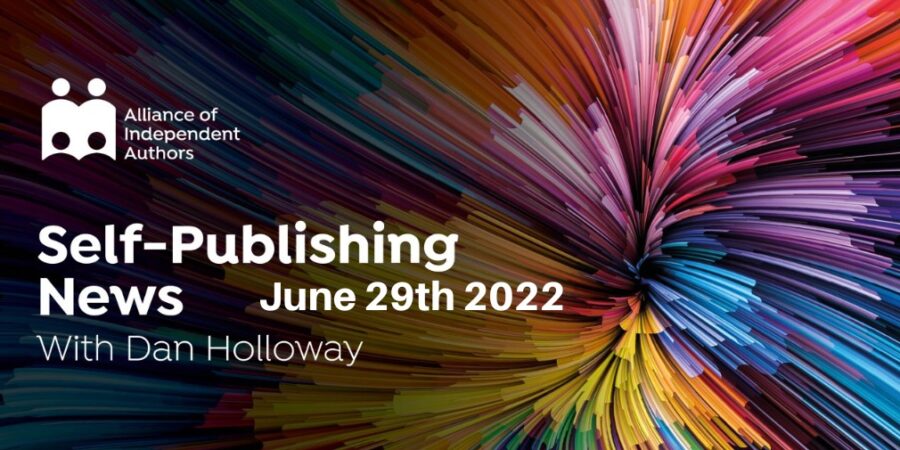 This month's Self-publishing News Podcast is just out. You can listen here. Howard and I take a deep look at one of the issues that features again in this week's news and will keep coming back: AI-generated narration. This week's #indieauthorchat is tonight, Wednesday 22 June, at 8pm UK time, 3pm Eastern Time. Tim will be leading a discussion on how important reviews are.

You’ll remember last week I reported on the inclusion of Michael Winklers’ Grimmish on the longlist for the Miles Franklin Award. This was a major breakthrough in terms of critical recognition of a self-published work. I ended the item with a wistful wish that I might have something positive to report on the shortlist this week.

And the judging gods have smiled upon me. Grimmish is one of the five shortlisted titles. This makes it the first self-published title in the award's 65 year history. And the critical praise for the book in the accompanying media is great to see. Finally, a self-published book is being taken seriously as literature and not just for its sales. I am utterly thrilled. Now for the next stage!

The Curae Prize: Another New Award Open to Indies

Next is another good news story. And it’s another story that follows on very nicely from last week. And it’s in a similar vein. New awards that are open to indie authors. The Curae Prize has two categories, fiction and non-fiction. It is the brainchild of author Anna Vaught and is open to writers who are also carers. Entries will open in January 2023, and the prize in each category will be (at time of writing – it may increase) £500 and a large selection of other valuable goodies such as courses and mentoring. Anna Vaught says:

“When you are a carer, energy and time for creative work or personal ambition can be lacking, but in this prize we aim to draw you out, nurture you: writing is not just a luxury, but can be at the core of who you are. I know that from my own experience.”

Good luck to all.

Annual Reading Habits Survey: What Can We Learn?

The Annual Reading Habits survey in the USA is always a fascinating insight into people’s relationship with books. And it can give us an invaluable look at where trends might go in the coming months and years.

The headlines around this year’s survey seem to have decided to focus on the negative. Over half of American adults did not finish a book in 2021, we are told. But what does that mean? There are two answers to that question. One of them is purely about the rather iffy use of words themselves. As commentators have been quick to point out, Gen Z adults as a whole are reading and finishing fewer books than older generations. But they are also consuming more audio material. The survey does not count “consuming audio” as “reading” though. So the figures are, as one sadly expects of such figures, of limited value.

The most interesting stat I found looked at those who started but didn't finish books compared to those who never started. The number of those in the latter category remains fairly flat across generations. The disparity in numbers finishing books across generations is almost entirely down to the fact that younger generations start but don't finish. That's what I'd love to unpack. It would be tempting to see this as proof they are fickle. But maybe it's proof that they are intentional. That they select the part of a book they want to read. It may be that they value their time and don't want to commit to finishing something for the sake of it. This matters.

The second thing the survey “means” of course is that there is not just a growing market in audiobooks these days but a growing market for audio. Younger generations read (sorry, I'm not saying consume) audiobooks voraciously. They also love podcasts. The possibilities are there for us as writers, especially if what we write works for these younger readers.

What do Amazon and Google’s Science Fiction-like Headlines Really Mean?

If we really want a look at what the future of books has in store, perhaps we shouldn’t be looking at the reading habits survey. Maybe we should be looking at some of the recent headlines coming from the tech giants. Undoubtedly there is a massive mix of exaggeration, hype, and bad science in the recent frenzy over Google’s Artificial Intelligence. Google engineer Blake Lemoine claimed that Google’s LaMDA (Language Model for Dialogue Applications) had achieved “consciousness.” And in one of those moves that has the opposite effect to what was intended, Google then suspended him. Not for making wildly over the top claims. But for breaching confidentiality.

Google’s AI almost certainly isn’t conscious in any way that you or I might recognise. But Amazon’s Alexa really can talk to you and sound like a dead relative. Which raises some of the questions I remember vexed the world of film when it became possible to use CGI to bring dead actors back to the screen. And is also just super creepy.

But it is more significant than that because it comes at a moment when AI-generated narration is really starting to take off in the audiobook world. Spotify, you will recall, has just purchased the AI narration company Sonantic in what is clearly the start of a big move. Meanwhile Amazon still don't accept AI-generated narration onto Audble. I wonder if that's connected with Alexa's new ability. If Amazon were to offer readers the chance to have audiobooks read by anyone they wanted, including dead relatives, what kind of a world might that open up?

The UK Government response to its consultation on AI and copyright was released yesterday. I will report at length next week, but the headlines are:

There will be no change to copyright law for Computer Generated Works – they will remain legally protected without human author.

There will be no change in regard to AI and patent law.