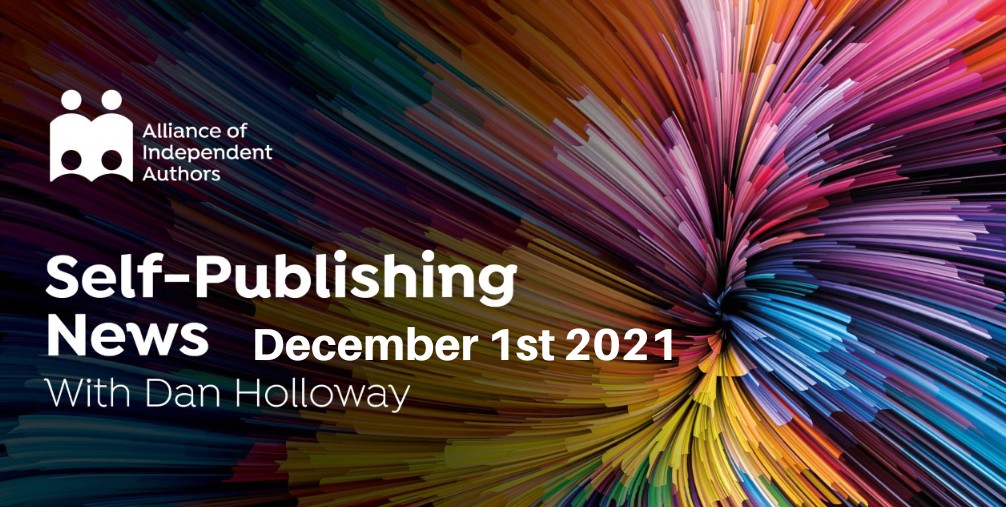 In the latest self-publishing news podcast, Howard and I will talk about the publishing industry's issues on climate change and the future for audiobooks. On tonight's #indieauthorchat at the usual 3pm Eastern, 8pm UK time, Tim will be talking to Karen Inglis about self-publishing children's books.

Audiobooks seem to be on everyone’s mind at the moment. This week, a major new report by Nielsen, the company that holds the key to official publishing data in the UK, casts an in-depth look at the state of the market in the UK. This follows a report from the UK Publishers’ Association. Both reports show that audiobooks remain the standout format in terms of growth.

Let’s start with the UKPA figures. Here, the comparison is between the first 6 months of 2021 and the first six months of 2019. There was interesting growth in several sectors, with children’s books continuing to show strongly. Sales grew by 8%, which includes a 26% growth in digital sales. But audiobooks across the piece really dominate the headlines. Growth in this 2 year period was 71%.

Nielsen’s Report, Understanding the UK Audiobook Consumer, focuses just on audio. And there are some really interesting findings. First is the size of the audiobook market. One of the easiest things to say about the continued rise of audiobooks is that double digit growth (this is the 7th consecutive year of double digit growth) is easy when the starting point is so small. But each year makes that starting point less small. Over those 7 years sales have tripled, both in terms of units (to 25 million) and revenue (to nearly £200m). Print sales have remained relatively flat at around £3bn over the same period. So while audiobook sales are still under 10% of print sales, that percentage is growing really quickly.

The heaviest readers are subscribers

I found the most interesting figures were around subscription. They told a story we could have predicted – and one that was slightly surprising. The small surprise is that subscription levels as a percentage haven't increased across the board. For the “heavy” digital audiobook readers, they have remained stable at around 90%. But that in itself tells a story. First, 90% is already huge. Second, 90% of around £130m in 2021 is more than 90% of around £80m in 2018.

But the real story is that subscription is growing. For all audiobook readers, subscription rose from 31% to 44% between 2018 and 2021. That's a big jump. And recent events mean it's inconceivable it will reverse in the near future. We have to start planning accordingly.

To thank you for your time, you can download a free audiobook, from a selection produced by DeepZen, at the end of the survey if you provide them with your email.

I’ve taken the survey, and one of the interesting points of which it reminded me was Audible’s rather anomalous policy of not at this stage permitting digitally produced narration, whatever the quality. Obviously the moment anything shifts on that front, I will let you know!

DeepZen uses AI-powered voice technology to provide narration at a fraction of a cost of using a voice artist. There are obviously many issues that this raises, but DeepZen are very keen to understand what factors authors are considering when deciding how to produce their audiobooks.

It’s not just in the UK that the audio boom is in the news this week. In typically ebullient “See, I told you” post (in fairness, he did – which is why you should read him), Mark Williams takes a look at the implications behind a new $78m investment in podcast firm Podimo. Podimo is a platform based in Scandinavia, where things are pretty bullish about audio. The region is home to the likes of Nextory and Storytel. But the release put out to accompany Podimo's Series B raise makes a claim that outstrips even that bullishness. It states an anticipated audio market, combining audiobooks and podcasts, of $50bn by 2030. That eclipses Storytel's recent ambitious $37bn estimate. But as Williams points out, developments like Spotify's acquisition of Findaway are already changing expectations even as they form.

To keep things topical after last week, one of the encouraging things to come from Futurebook was learning that print on demand is the least damaging form of print supply for the climate. So it's great to learn that Ingram are setting up a print on demand factory in Sharjah. Sharjah is a big player when it comes to books. The Sharjah Book Fair recently became the world's biggest event of its kind. The move also tightens Ingram's hold on the global print on demand market, of course. At the same time as it is doing the same on the world's supply chain and warehousing. So, as indies think about Amazon's monopoly and the UD Justice department worry about Penguin Random House, it's worth resharing what I wrote a year ago about one of the less talked about industry slides to monopoly.

a 7th successive year of double digit audiobook growth in the UK and other top #selfpub news stories for #indieauthors, in one quick read, by #ALLi News Editor Dan Holloway @agnieszkasshoes #digitaleconomy #publishingopenup Click To Tweet