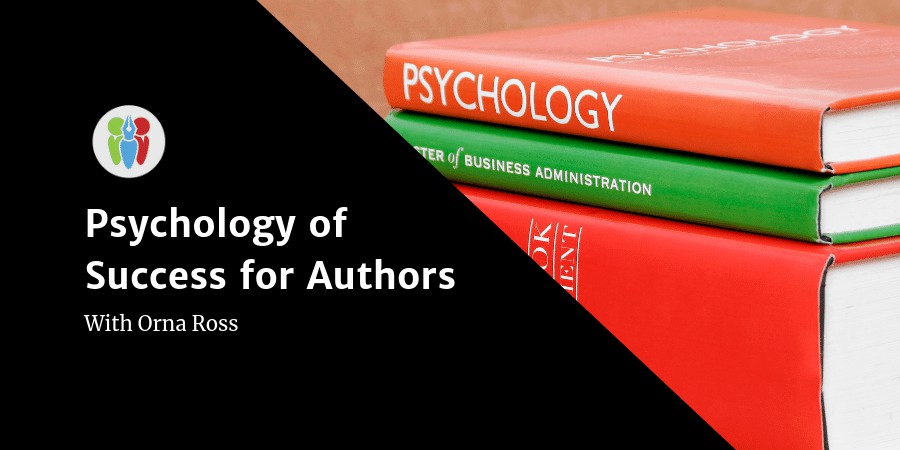 The Psychology of Success For Authors: Do You Secretly Think Self-Publishing is Second Best?

Is there a psychology of success for authors? Orna Ross, founder and director of the Alliance of Independent Authors, thinks having a growth mindset is the single biggest predictor of success for an author.

Is there a psychology of success for authors?  I found myself recently, as I often do, at a writers’ conference, and it left me pondering this question.

Two Sides of the Room

Anyone who regularly attends author events tells the same story about how such rooms tend to divide. At the trade-published side of the room, aspirants share their concern, or sometimes despair, about their chances of ever being “published.” They’ll report that the conference's agent-in-residence liked their work but wasn’t going to make an offer to represent it, for this reason or that. Those who already have a publisher often complain about what they, or their agents, have failed to do for them.

At the author-published end of the room the talk is more animated, discussing the merits of this editor or that designer, this tool or that technique, this recommendation or that warning. The animation is creative and commercial, as the published authors swap tips and tools, ideas and insights, and pass on advice to the aspirants. Their talk is about work, not dreams.

At least, that’s how I see it. I believe every author should self-publish (at least once) to see for themselves. There is so much myth and misinformation about self-publishing the only way to know if it's for you is to try it and see. That, it seems to me, is what any open-minded, success-oriented author would do.

And therein lies a divide that seems to me to be far more significant than the trade-published versus self-published divide that gets so much attention in the publishing community: the divide between those authors who have what psychologists call a “growth mindset” and those who do not.

The Psychology of Success for Authors: Do You Think Self-Publishing is Second Best?

There really is a psychology of success for authors, and many indie authors I know have it, but some have not yet developed it.

A growth mindset is the belief that with sincere creative intention, and enough creative attention, we can develop the abilities, skills, and resources we need to attain our goals.

Would it surprise you to know that it’s not just trade-published authors who think self-publishing is second best? Some of those who call themselves indie authors do too. Unsurprisingly, they rarely do well because they haven't developed that key attitude for indie success.

Why might an author think self-publishing is second-best? Let's leave aside the people who have believed the misinformation–that indies can't get into bookstores, licence rights, sell poetry or literary fiction, win prizes, and so on, all untrue.

Then there are those who feel the very concept of author business is brash, who seem almost shamed to talk about making money by writing. And those who are resigned to the idea that they'll never succeed with their books…without ever having properly tried.

It seems to me that all of these authors suffer from the same condition which is brilliantly described by Dr Carol S. Dweck in her book, “Mindset: How You Can Fulfil Your Potential.”

The Psychology of Success For Authors: Growth Mindset

Dweck and her team have examined the brainwaves of people with both mindsets in her lab at Columbia University. Those with a fixed mindset had most significant neurological activity when feedback reflected on their ability. When they were presented with information that could help them learn, there was little sign of interest.

Those with a growth mindset were most interested in information that would increase their knowledge. Their priority was learning to do better next time.

As Dweck's team and other psychologists have built on their initial findings, it seems ever more clear that growth mindset is a predictor of success, especially in creative environments. Why? Because this simple idea fosters the resilience that is essential to creative success

You don't get a growth mindset “by proclamation,” says Dweck. “You move toward it by taking a journey.”

You prove yourself to yourself.

The Psychology of Success For Indie Authors: Creative and Commercial Control

The stigma that once surrounded self-publishing is dissolving, as more indie authors adopt a growth mindset and experience commercial and creative success. It’s all part of a growing movement towards author empowerment, which ALLi is proud to foster and encourage.

From observing members of the Alliance of Independent Authors, I think having a growth mindset is the single biggest predictor of success for an author, whatever path to publication you're choosing, wherever you are in your author business.

What do you think? Do you secretly think self-publishing is second best? If so, why? Are you more interested in validation or growth? Let us know in the comment box below.