Have you started thinking about NaNoWriMo yet? November isn't far away, so if you plan on participating this year you should already be considering what, and how, you're going to write. Who better to get your plotting wheels turning than Johnny B. Truant and Sean Platt from Sterling and Stone.

This creative duo created a Video session at our BEA Indie Author Fringe event, and we've just released the podcast of Writing Better Stories Faster, which is available below.

Johnny and Sean have quite an indie pedigree. At last count, they had 36 imprints, and have released over 100 books across the Sterling and Stone writing team. Throughout their collaboration journey they have acquired hands-on experience to fine-tune a creative process that enables them to write better stories faster.

This is the catalyst behind their Kickstarter campaign for StoryShop, which is story-planning software intended to help other writers, write better and faster. At time of this article the app is still awaiting a launch date, but this podcast gives you some valuable pointers for fine-tuning your own creative process – perfect timing for NaNoWriMo.

A lot of indie publishing is frontier thinking. Sean and Johnny have been figuring the best way to approach their writing process, and in this podcast they share some lessons and techniques they've learned along the way. Here are three elements from this podcast that really resonated with me:

Want to know why some books sell more than others? This information is out there and accessible to anyone who wants to take the time to understand their genre better. At the end of the day, if you want to sell more books, you have to write books that appeal to the genre's core audience.

So what better way to know what an audience likes and doesn't like about a best-selling book, than reading its 5 Star and 1 Star reviews. You can discover what resonates with readers, and what they really loved vs. what they didn't like, or thought was missing.

You can use this research and incorporate it into the outlining phase to build a stronger foundation, even before you start writing your first draft.

Note: If you know what genre you want to write during NaNoWriMo, why not head over to Amazon and see what's selling in that genre. See what elements of the 5-star and 1-star reviews can help you in your story planning process.

When Johnny and Sean first started writing together it was as simple Sean coming out with a very simple outline and then Johnny turning it into a book. Along the way, David Wright joined the writing team, and they developed a systematic way of writing together that allows them to establish core relationships with the characters.

So when they start writing, they're just sharing stories about people they all know.

Using cinematic conventions, they cast characters and identify who would play the part in a movie. They also look at locations, to get a feel for the world that their characters inhabit.

Note: If you're already a Scrivener user, there's plenty of fiction templates out there that allow you to build your character profiles, so you don't have to start this process from scratch.

At the end of this process, there's enough information for each of the writing team to be able to picture the locations and know the characters. They have a connection with all of them, and this is one of the elements that allow them to write their stories faster.

The Importance of Cover Design for your readers, and you 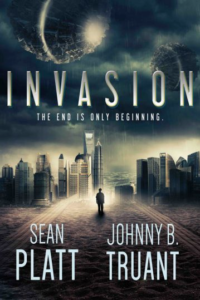 This topic never gets old! But what was interesting was hearing about Sean and Johnny's writing process. For Book 1 in the Invasion series, they commissioned the book cover before they started writing, and it provided some creative inspiration for their story details.

There was similar discussion on our ALLi Members' Facebook group last month, and it turns out that quite a few of our authors (me included) creates the book cover at the beginning of the process to help motivate and inspire the writing process.

Note: Head on over to Canva.com and use their ebook template to create a draft cover of the book you're going to write during NaNoWriMo…… now it's designed, doesn't your book concept feel more real? (Don't worry if you're not a designer, this is just a draft, and you can commission a cover designer to create the final design when you're ready)

During their cover design discussion, Johnny and Sean also discussed the importance of genre conventions in the cover process. Yes we all want our book to stand out in our genre, but if you design against the established conventions, especially in the major genres, you may end up getting passed over rather than stand out.

Ok I confess, when the Writing Better Stories Faster video was released during Indie Author Fringe I had a preconceived notion that Sean and Johnny's writing approach was nothing more than a writing treadmill, with no depth or substance to their stories or characters.

But on the contrary, these guys have an intimate knowledge of the genres they write in. They know their characters inside and out, and understand the lives they live and their motivations. This foundational understanding is in place, even before they speed-type their opening paragraph.

So I stand corrected: They know what their audience wants, and they're passionate about what they write.

Write, Publish, Repeat: How to Turn Your Art from a Hobby into a Real Business Live Podcast with Johnny Truant, Sean Platt & David Wright

Write, Publish, Repeat: How to Turn Your Art from a Hobby into a Real Business Live Podcast with Johnny Truant, Sean Platt & David Wright

The Age of the Serial: Samantha Warren